The Philippines is an archipelagic country in Southeast Asia. Situated in the western Pacific Ocean, it consists of about 7,641 islands that are broadly categorized under three main geographical divisions from north to south: Luzon, Visayas, Mindanao. The capital city of the Philippines is Manila and the most populous city is Quezon City, both within the single urban area of Metro Manila according to Wikipedia.com.  Located in Southeast Asia, its many peculiarities make it a perfect destination to enjoy the holidays, whatever type of trip you have in mind. Sounds good right? Join us to discover this wonderful country! 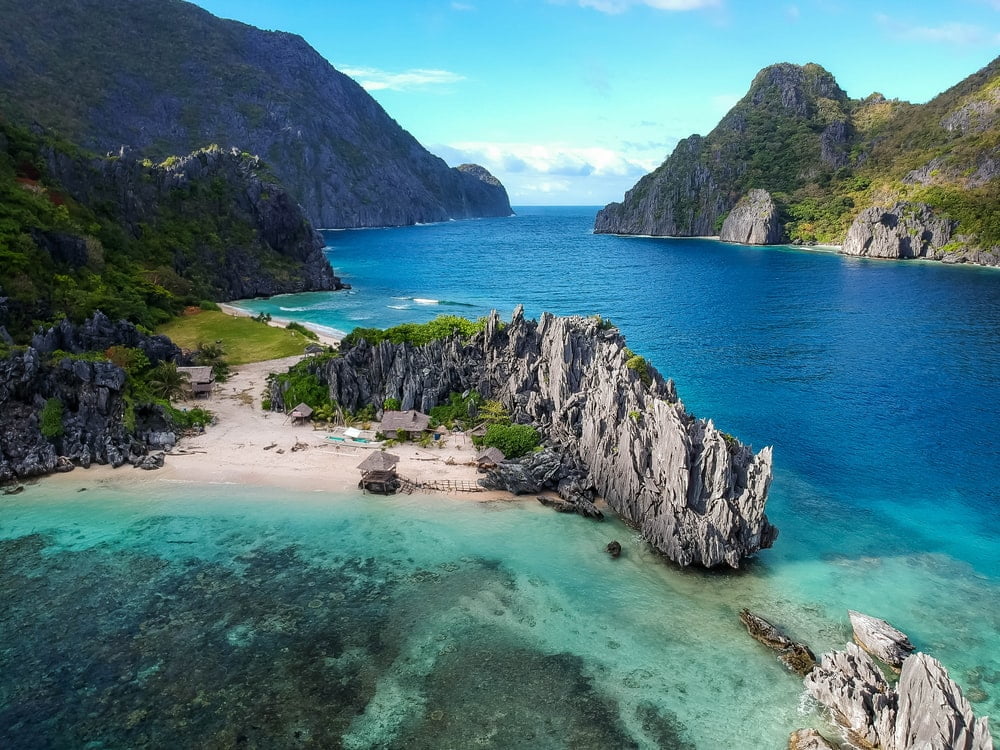 Why travel to the Philippines?

In the Philippines, one feels like a true adventurer because there are so many adventurous things to do in Philippines. Jump from island to island, snorkel among colorful fish, enjoy magical sunsets, taste fresh fish and toast the Filipinos, the friendliest inhabitants of Asia according to Forbes.com.  If you also want to travel to the Philippines but you don’t know exactly which places to visit, you’ve come to the right place. Here I am going to explain some of the best places to visit in the Philippines.

What to see and do in the Philippines?

The Philippines has more than 30,000 kilometers of coastline, which makes it the sixth country with the longest coastline in the world! You could spend years cruising its islands and yet you would not have enough time to discover all its treasures

2. Surf in one of the best-known beaches in the world

The Philippine islands are a paradise for surfers, especially the island of Las Palmas, in Siargao. Here one of the most famous championships in the world is held, thanks to its break known as Cloud 9.

Filipino food mixes, like its culture, influences from indigenous, Asian, and Hispanic cuisine; a combination of fresh ingredients, ancient techniques, and the most interesting spicy flavors that make the country one of the most palatable culinary destinations in the world.

4. Browse through the historical heritage

Due to its past as a Spanish settlement, the Philippines preserves historical monuments, such as the Magellan’s Cross and the Santo Niño Basilica in Cebu City.

Many boats depart from this city to Pescador Island, one of the best places to practice diving. In these waters, you can swim among turtles and spot, on occasions, the great whale shark. Also, although less frequently, you will see the hammerhead shark.

5. Go on a trek in the Chocolate Hills

The island of Bohol is known for its famous Chocolate Hills, a set of more than 1,200 mounds, totally symmetrical! The best time to visit them is during the dry season (December to April), when the green and moss that covers them turn brown, making them look like a pile of chocolate bonbons. The Chocolate Hills is a famous tourist attraction of Bohol. They are featured in the provincial flag and seal to symbolize the abundance of natural attractions in the province. They are in the Philippine Tourism Authority’s list of tourist destinations in the Philippines, they have been declared the country’s third National Geological Monument and proposed for inclusion in the UNESCO World Heritage List. 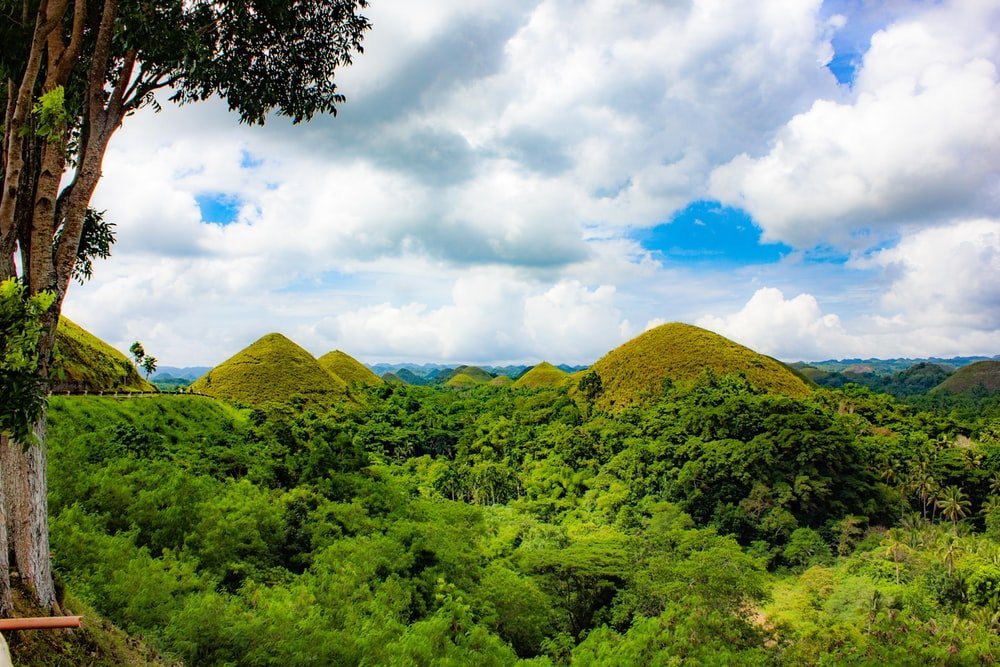 The image speaks for itself: Palawan is a natural jewel that dazzles with the emerald color of its waters, in contrast to the tropical jungle and the white of the sands that bathe its beaches. An idyllic and heavenly landscape, rather like a postcard. On the east coast are El Nido and the Bacuit archipelago, a set of 45 islands with impressive cliffs. Without a doubt, the perfect place to rest and relax.

If you are looking for a bit of action, Camiguín is your island. In the more than 3,000 hectares of jungle, with the Hibok-hibok volcano as the protagonist, you will find the adventure of your life. This natural heritage area is one of the most biodiverse places in the Philippines, both outside and in the water. The seabed is one of its best-kept secrets. 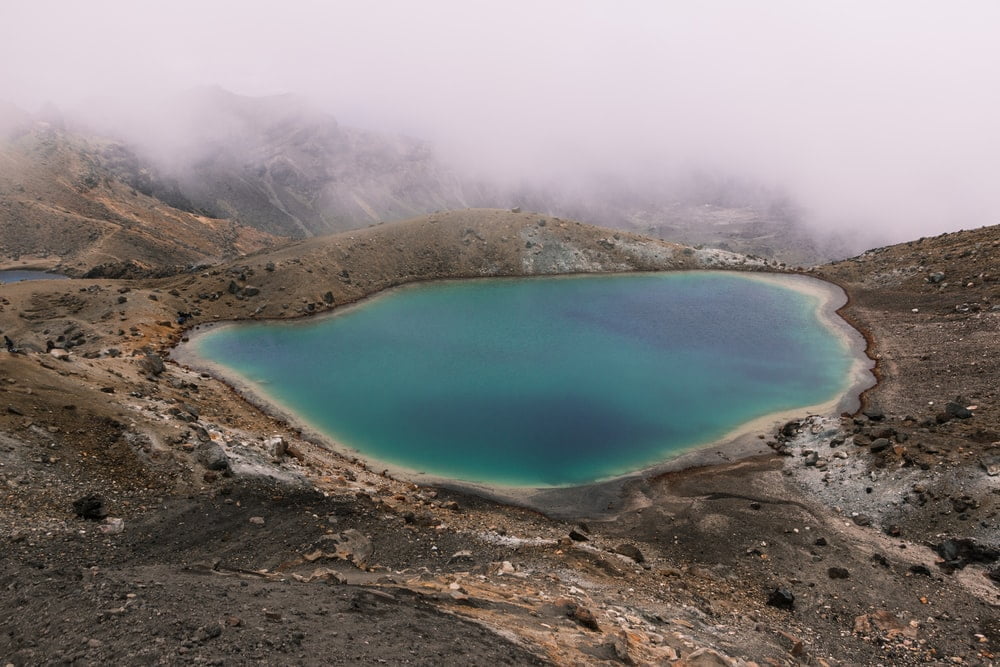 The Batad Rice Terraces, a UNESCO World Heritage Site, were built in the northern Philippines more than 2,000 years ago. Today, they are the pride of the Ifugao tribe and one of the biggest tourist attractions in the Luzon region.

9. Rent a motorcycle and drive aimlessly

If you like to drive a motorcycle, in the Philippines you will enjoy it, a lot! Islands like Siargao have perfect paved roads to follow until nightfall. You never know what landscape lies behind each curve.

Thanks to its cosmopolitan culture, with Spanish, American, Malaysian or Indonesian traditions, the Philippines hosts various festivals and colorful events throughout the year. The people of the Philippines certainly know how to throw a party!

John Gentry is author at LeraBlog. The author's views are entirely their own and may not reflect the views and opinions of LeraBlog staff.