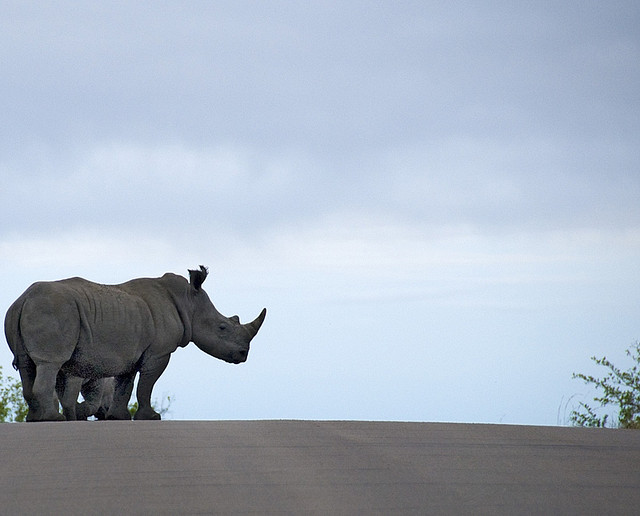 As the third-largest land mammal, the rhino is an integral part of the Kruger Park safari experience. However, the unprecedented number of rhinos being poached owing to a demand for their horns in Asian countries such as Vietnam means that they’re facing extinction. This article examines the differences between South Africa’s two types of rhino — the white and the black — and details the recovery in their numbers after nearly being driven to extinction as recently as 1920.

Like Nile crocodiles, rhinos have an impressive prehistoric lineage going back 50 million years. Their first ancestor was the ‘giant unicorn‘ (Elasmotherium sibiricum) which was 20 feet (6 metres) long with a 7ft (2m) long horn. The ‘unicorn’ was identified by Johannes Fridericus Brandt, who made it the subject of a dissertation in St Petersburg in 1878. The African rhinos branched off from their Asian brethren about 10 million years ago while the black (Diceros bicornis) and white (Ceratotherium simum) each went their own evolutionary way between four and five million years ago.

Today, white rhinos — the third-largest land mammals after elephants and hippos — are far more common than their black counterparts. White rhino (the adult males of which weigh nearly 2.5 tons) are larger than the black, and more placid, although both species are short-sighted. The white rhino has a square upper lip in order to graze grass; the black rhino, on the other hand, has a hooked lip as it browses from shrubs and trees.

Another point of difference between the two types of rhino is that white rhino calves run in front of their mothers while black rhino offspring run behind their mothers. It would be a mistake to assume that the normally slow-moving rhino isn’t quick when it matters: the white rhino, it is said, can reach 45 kilometres an hour (28 miles an hour) while the black rhino is even faster, hitting 50km/h (31m/h).

Ironically, the rhinos’ names are inaccurate indicators of their colour — some suggest that ‘white’ is derived from the Dutch ‘wijde’ (or wide), which is how Dutch hunters described the white rhino’s square, flattened lips. Both white and black rhino are, in fact, a dirty grey, depending on when they had their last mud bath.

Finding Rhinos In The Kruger Park

In Kruger Park, you’re far more likely to see rhino in the south, particularly the southeast, than anywhere else; white rhino, being grazers, frequent the district between the Crocodile and Sabie rivers, while there are also small numbers around Letaba in the north-thanks to a relocation that took place in the 1960s. Black rhino, being browsers, are partial to the almost impenetrable thorn thickets and dense bush, and can be found between Skukuza and Pretoriuskop in the southwest section of the park.

The rhino hasn’t always been so easy to find, even in the districts that now fall under Kruger’s jurisdiction. The 19th century free-for-all by European hunters saw the near-decimation of the rhino — indeed, it’s said that there were only 20 left in southern Africa by 1920. According to the records of some hunters, the last Transvaal white rhino was seen in 1896, two years before Paul Kruger proclaimed a game reserve. On 14 October 1961, four rhino — two bulls and two cows — were moved to Kruger from Natal (now KwaZulu-Natal) on South Africa’s southeastern coast; over the next decade, they were followed by 330 more rhino.

The alarming rate at which rhino are being poached in Kruger Park has helped illuminate the dark world of trade in rhino horn; most of the horns seem to end up in countries such as Vietnam where products derived from the horn are said to cure cancer, or are used as a party drug.

Conservationists have tried to stem the poaching by cutting off rhino horns in the hope that the animals will be spared but this isn’t an easy task when you consider that the average length of the front horn on a white rhino is 75 centimetres (30 inches) long.

Reports indicate that 15 heavily armed groups of poachers operate in Kruger at any one time, particularly during full moon when it’s easier to see the rhino. The poachers don’t hesitate to shoot at park rangers when confronted, which has led to the deaths of several poachers over the past few years.

Fortunately, Kruger Park isn’t the only large-scale rhino sanctuary in South Africa — the animals are prominent residents of game reserves in KwaZulu-Natal, particularly the Hluhluwe-Mfolozi Park in the northeast reaches of the province. Stories abound of 19th century hunters who, while plundering the Zulu kingdom’s wildlife, found a veritable Garden of Eden that they could exploit for ivory, meat and other trade goods. The Zulu, of course, were well acquainted with rhino, and had their own name for the black rhino — uBejane, meaning ‘the vicious one’.