Amongst the numerous must-dos during a visit to Rome is checking out the beautiful fountains that dot the city. There isn't a square that isn't adorned with a fountain! !

Presently a source of historical, architectural and touristic interest, these public fountains originally served a multitude of purposes. Primarily, they served as highly needed common sources of water in the days prior to plumbing at home. Additionally they served as the works of famous artists commissioned by various Popes through the centuries. 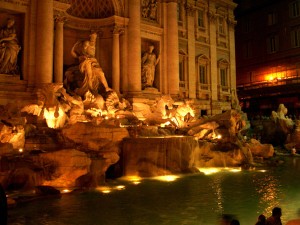 A walk around the Spanish Square near the Spanish Steps will bring up the Fontana della Barcaccia, or Fountain of the Old Boat aptly named for its history. The artist Bernini, maker of a number of fountains in Rome, built this boat shaped beauty as a reminder of a boat left behind when the flooded river Tiber receded. Touristic custom dictates collecting water from this fresh water fountain for drinking. 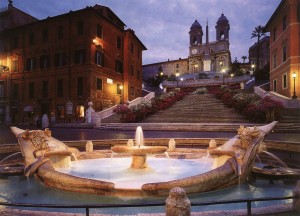 The next fountain on a Rome tour guide's must visit list is usually the Fontana delle Naiadi or the Fountain of the Nymphs. It could be arguably the most sensuous fountain of Rome. The four beautifully worked on Naiadi or nymphs symbolize the different sources of water, lakes, rivers oceans and underground water. The Naiadi are a kind of female spirit that preside over various fresh water bodies. 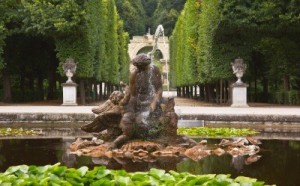 Walk around the Roman Pantheon and you come across the Fontana del Pantheon, a unique structure with a Ramses obelisk and four dolphins. Interestingly, this structure is partly a copy of itself! Except for the Ramses obelisk, the marble structure was recreated in 1886 and the originals placed in the museum of Rome. Having seeing this fountain, a visit to the Roman Pantheon is a must and a bonus since entry to it is free! 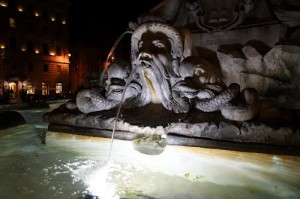 When you're in St. Peter's Square in Vatican City, you can't miss the two huge granite fountains that envelope a towering obelisk. Both fountains were built around fifty years apart in the seventeenth century, the second one by the famous Bernini. The Egyptian obelisk, four thousand years old, was built here in 1568, though the Square was designed and built almost a hundred years later. 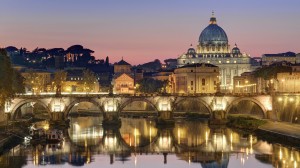 Think of grandeur and the Fontana dei Quattro Fiumi at the Piazza Navona comes to mind. Built by Bernini for the Pope Innocent X in 1651, this fountain represents the four major rivers of the four continents, the Nile, Danube, the Ganges and the Plate River through which papal authority spread in the world. Piazza Navona has two additional fountains: the Fontana del Moro at the southern end and the Fountain Of Neptune at the Northern End built , again beautiful works of art created by different masters at different points in time. 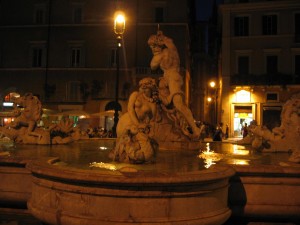 Another beauty is the Triton Fountain located in the Piazza Barberini. It is one more example of baroque opulence, representing a minor sea god Triton who is half man and half fish. Triton is shown blowing a horn to calm the waters. The Trevi fountain legend has been extended to this fountain also. A visitor who throws a coin into the fountain while facing away from it is guaranteed another visit to Rome! 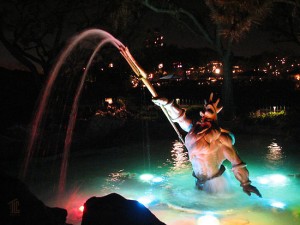 Apart from the magnificent fountains mentioned above, there are approximately fifty monumental fountains and scores of smaller ones, totaling two thousand in all, more than any city in the world! When you go to Rome, do keep a count of the fountains you find in every nook and heritage filled corner of this fascinating city!

Miranda is author at LeraBlog. The author's views are entirely their own and may not reflect the views and opinions of LeraBlog staff.