Festivity and fun are always loved by people and even more so when the festivities are from an exotic land with its own cultural traditions and its different ways of life. Malta, a popular destination for tourists who love exotic beaches, natural diversity and serenity, is also a colorful and lively place when it comes to celebrating festivals and carnivals. The whole country of Malta comes to life during the time of the Carnival which is one of the best and most popular events in Malta. It has a special place on the island’s calendar and is celebrated lavishly every year, calling many tourists and holiday goers to witness the awesome festival. Dancing children, colorful costumes, local and foot tapping music, street side fantasies, merriment and downright silliness are the highlights of this festival and this is what greets the tourists when they set foot here during the time of the carnival. Some of the facts about the carnival and its celebration have been mentioned below. 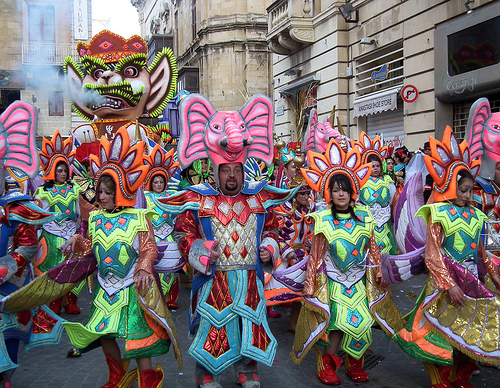 History and origin of the festival

The carnival in Malta has a history dating back to the fifteenth century during the times of the Knights of Malta. During those times, the people and the civilization celebrated different types of festivities and did all sorts of wild things during specific periods of time for their own pleasure. These wild festivities made the Grand Masters unhappy and a few even tried to ban or curb the events. But this was not to be and the Carnival in Malta stood the test of time and is widely celebrated now among the locals and the people with lavishness and pride.

The preparations for the big day

Many Carnival aficionados spend many months preparing for the games, festivities and the events to participate during the four days of the Carnival. They prepare all sorts of beautiful costumes, design themes and various depictions of animals, people, mythical creatures and any other thing which catches their fantasy, just to be a part of the grand Carnival and take part in the grand parade. During the Carnival, people wear unique and often eccentric outfits and dance through the streets in elaborate costumes, peculiar characters and showcase their talents and enthusiasm. The artists and the designers take pride in showcasing their skills and art works through this festival and in making their designs and thoughts reflect in the streets when the people wear the outfits and costumes designed by them.

The Carnival consists of people of all ages- adults, children, men and women- who dress at random, either independently or as a part of a group and indulge in merriment and dancing. The families, tourists and the by standers can watch this Carnival from stands that are specially constructed for the viewing people and they can also enjoy the Carnival from a distance. There are a large number of marching bands, performing artists and a host of items which can be bought during the Carnival.

The alluring carnival in Nadur

This is another unique type of festival in the Maltese islands, and though it is also a Carnival on the lines of Malta, it still is very different. The Carnival activities here differ in the fact that nothing is pre planned and ordered. People from all walks of life- artists, professionals, junkies, locals and even tourists- become a part of this and descend in the town clad in strange, funny, grotesque or creative looking costumes, which are many times very ghastly to look at. This eventually turns out to be a party with all the mad happenings, fun filled extravaganza and a different type of craziness which is a mix of fun and desire. Thus, it is generally not for the faint hearted or the normal families, unlike the festivities in the Carnival at Malta.

Another high point of the Carnival is that there is lot of food and drinks and rich local flavor and hence tourists want to be here at this time of the year as they get to see an entirely different image of the otherwise scattered population. The local sweet ‘Prinjolata’ which is a uniquely shaped cake and the Madeira cake which is topped with cream and exotic chocolate are the festival favorites of the people and are sold in large quantities during the festival days.

Several large carnival balls and dance parties are organized throughout the island of Malta on such occasions and locals along with tourists and holiday lovers enjoy them. They are hosted privately, at several venues or at hotels and often consist of swanky and highly decorated venues with the local flavor in music and dances. You can definitely enquire about them at your hotel or through the locals and be at one of these places on your holidays so that you can enjoy the local flavor of Malta. Sometimes gifts and goodies are also presented at these balls and dances and more often than not tourists are given souvenirs as an incentive to come back to the islands next year during the time of the Carnival.

If you are planning to going to Malta, it would be nice to enquire about the Carnival dates and then schedule your trip accordingly so that you don’t have to miss out on this wonderful festival of Malta.