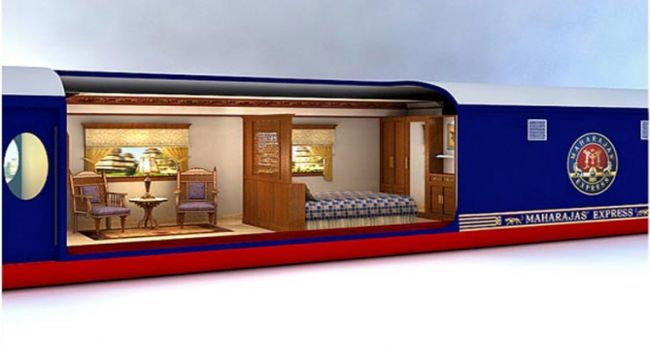 India-the country, soaked in rich culture and heritage, proudly introduced the luxury train, Maharaja Express, in 2010. Being home to ancient dynasties, the train is modeled to give you a taste of royalty. The train offers you five exclusive journeys, to exotic destination depicting the glorious past. The train has deluxe cabins and presidential suites, with modern amenities. The elegant interiors have been subtly designed to make you feel like a king. Two restaurants offer the best of Indian and international delicacies.

Gems of India -The four-day itinerary takes you across the majestic Taj Mahal in Agra. Ranthambore National Park’s adventure trail is next in offing. The Pink City of Jaipur is the last destination.

Day One-The Maharaja Express departs from Safdarjung Railway Station, Delhi on Wednesdays, from October to April at 10pm. After a pleasant welcome, dinner is served on board as the train proceeds towards it’s first destination, Agra. Rang Mahal and the Mayur Mahal â€” offer fine dining, you can enjoy authentic Indian or global cuisine. You’ll be escorted to your respective cabins, post dinner.

Day Two – Agra You will be escorted to The Taj Mahal once the train reaches Agra. The seventh wonder of the world was built by Mughal Emperor Shah Jahan in the memory of his beloved wife Mumtaz Mahal. UNESCO bestowed the memorial with the prestigious title of World Heritage Site. Built on the right bank of River Yamuna, the monument depicts the rich architectural designs of Mughal era. You’ll be served breakfast atop Taj Khema, placed close to The Taj.

Following this, you can either return to the train to rest your feet or explore the surrounding places of historic interest.

Fatehpur Sikri, a World Heritage site is another brilliant piece of Mughal craftsmanship, built by Akbar. Often referred to as The City of Victory, this was the capital of Mughal empire for 10 years. Fatehpur homes a number of monuments and temples. Jama Masjid, one of the largest mosques in India is built here. The courtyard of the mosque can accommodate over 25,000 devotees.

After lunch onboard, you’ll proceed to visit the Agra fort. Carved out of red sandstone, this monument comprises of several palaces, built by Shah Jahan â€” Jahangir Palace and the Khas Mahal. Diwan-i-Khas (hall of private) is also built on the fort complex, apart from two other mosques. 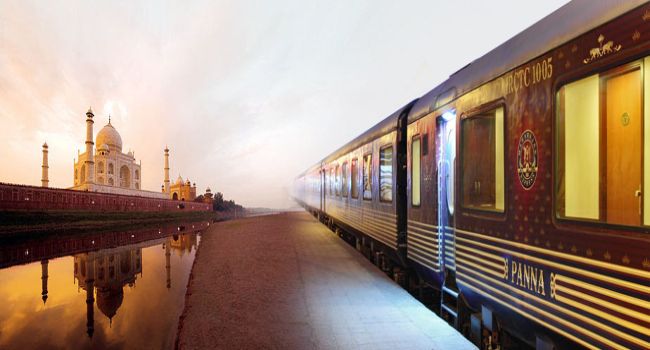 These historic sites beside Yamuna are epitomes of commitment. Time to chill, you can head for a spa or massage at a five-star hotel.

Shopping is also another option to unwind. Explore Agra streets to get a feel of the ancient Imperial City.

On your return to the train, dinner will be served on board. You can rejuvenate yourself as the luxury train gives you myriad options of relaxation.

Day Three-Ranthambore National Park. After ample history trail, it is time to get lost in wilderness. Once the train reaches Sawai Madhopur in Rajasthan, you’ll be headed to the national park in early hours. The Ranthambore National Park is primarily a Tiger reserve. You can spot other animals too, once you start off your jeep safari.Leopards, Fishing Cats hyena, jackal, nilgai, sambar, wild pig, desert fox are also seen on a prowl here, although the Lord of the forest here is Tiger!Ranthambore hosts a lot of birdies too. Pigeons, sparrows, parakeets, larks, weaver birds, wagtails, kingfishers, storks, ibis and thrushes are found in abundance. Reptiles such as lizards, python, rat snakes, tortoise, cobras, turtle throng the sanctuary. Royal Bengal tigers dominate the jungle area. The Land of Kings can send a thrill chill down the spine!

After breakfast at Vivanta by Taj, Sawai Madhopur, you’re requested to be on board as the train proceeds to Jaipur-The Pink City.Post lunch, you’ll be taken to Amber Fort, an important tourist magnet in Jaipur.The Amber Palace, built by Man Singh I, is a magnificent structure built within the Amber Fort. The palace is marked by high well-carved walls, depicting Rajput culture.Apart from huge gardens, the palace complex houses Sheesh Mahal (hall of mirrors) and Jai Mandir (Temple Of Victory).

An elephant ride in maharaja style awaits to show you around the fort. Visit Jantar Mantar (the stone observatory).Shop around the city for some of the finest jewellery, traditional clothes and handicrafts.An Exhibition Elephant Polo Match at A Jai Mahal Palace awaits you. A lavish dinner post recreational activities will be at your disposal.

Day Four-You’ll be served breakfast on board as the train reaches Delhi. All good things come to an end, so does the short-lived majestic tour. Living like a king or queen is one of those secret dreams we don’t like to reveal or talk about. Here’s a chance. Live your dream!

Want to visit Gems of India on Maharaja Express ? Log on to www.palace-on-wheel.com and let our travel experts organize the perfect India luxury train tour for you.