Gifted with pristine white-sand beaches, lush rainforests, sparkling cities and a unique culture, Malaysia has never failed to attract people from all around the world. While these are popular facts about Malaysia, not many know that this country is known for its theme parks. With 16 theme parks (10 more in various stages of development), Malaysia is undoubtedly the theme park capital of Southeast Asia. So, if you want to get some respite from the heat of Malaysia, or if your kids want to take a break from visiting major Malaysia tourist attractions, a visit to a theme park would be a welcome change. With this note, let us take a look at the best theme parks in Malaysia. 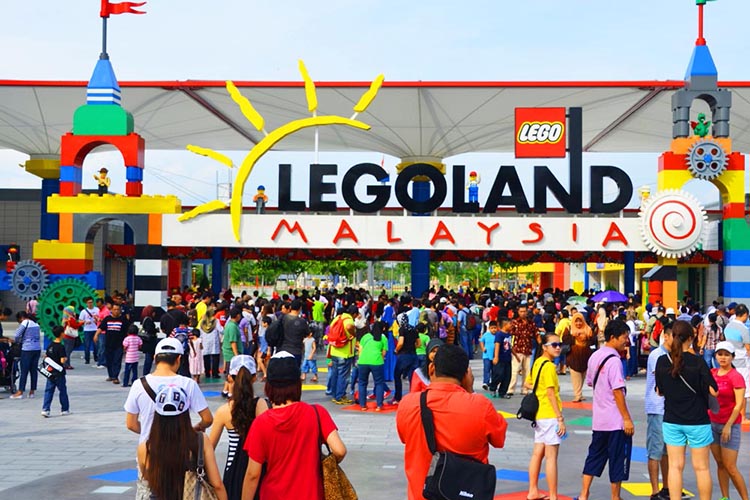 If you have ever played with LEGOs, the Legoland in Malaysia would be a place that you would love. Known to be Malaysia’s 1st international theme park, Legoland Malaysia is a delight for both kids and adults. Consisting of 7 entertainment zones, a water park, 20 rides and over 70 Lego models, this Malaysian theme park has a lot on offer. The zones of the park include the Beginning, LEGO city, Miniland, Imagination, LEG Technic, LEGO Kingdoms and Land of Adventure. Apart from enjoying the various rides and slides and taking in a dip in the various pools of the park, you can also create your own Lego models at this park. If you want to take your time to explore and enjoy the park, you can also book a room at the Legoland Hotel which has 249 guest rooms and also has various restaurants, a swimming pool and a bar. 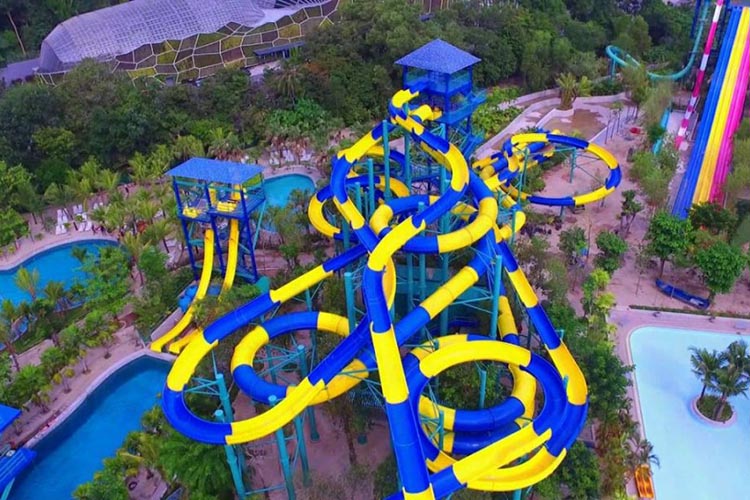 If the thrill of the modern theme parks, sustained by state-of-the-art technology, is not your idea of adventure, you may like something that is close to nature. Escape Adventure Theme Park in Penang is one such theme park. Rather than sitting on various adventure rides that depend on speed and severe twists and turns to thrill, here you have to put some effort as the Escape Theme Park offers some old-world adventure. So, get ready to climb on tree tops, leap off the ledge, zip fly down the rope, soar into the sky and swing along branches. There is also a water park where you can either try out the various slides or just laze around in the various pools. The Escape Theme Park of Malaysia gives you the chance to challenge yourself and indulge in some extreme adventures. 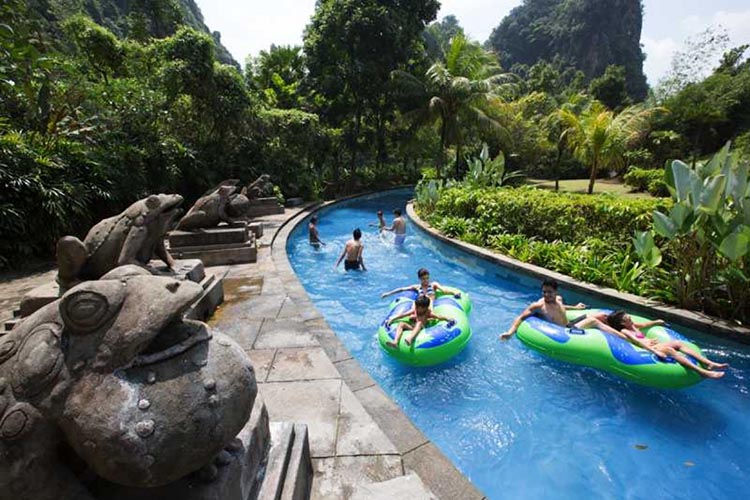 Surrounded by magnificent limestone cliffs, the Lost World of Tambun is unique from the rest of the theme parks in Malaysia. Located in the valleys of Ipoh, it is a great place to go to, if you want to take a break from the cities of Malaysia. As it has received several local and international awards, this theme park is popular amongst both locals and tourists. The place is divided into seven attractions which are Hot Springs & Spa by Night, water park, amusement park, petting zoo, tiger valley, tin valley and adventure park. So, apart from the rides and slides that are found in every amusement park, the Lost World of Tambun also offers some unique attractions. While the petting zoo would entertain as well as educate, the hot springs would offer you the much needed relaxation. 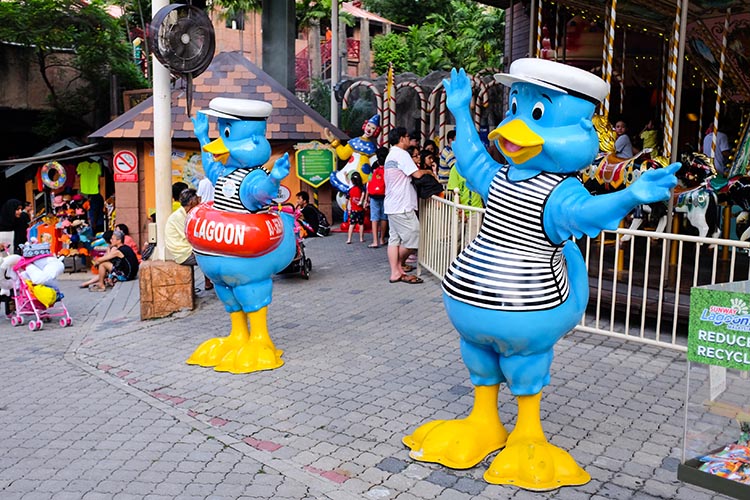 Right in the city of Kuala Lumpur lies one of the best theme park not only in Malaysia but also in the entire world. It was started in 1993 and is spread within 88 acres of land. Divided amongst six zones, the park has more than 80 attractions. The six zones that you would find here are Nickelodeon Lost Lagoon, Wildlife Park, Extreme Park, Scream Park, Water Park and Amusement Park. With so many zones, you would find something for everyone in Sunway Lagoon. While the water park is popular for the world’s largest manmade surf, you can indulge in bungee jumping at the Extreme Park. You get to meet and know about different wild animals at the wildlife park. It is educative, interactive as well as interesting. 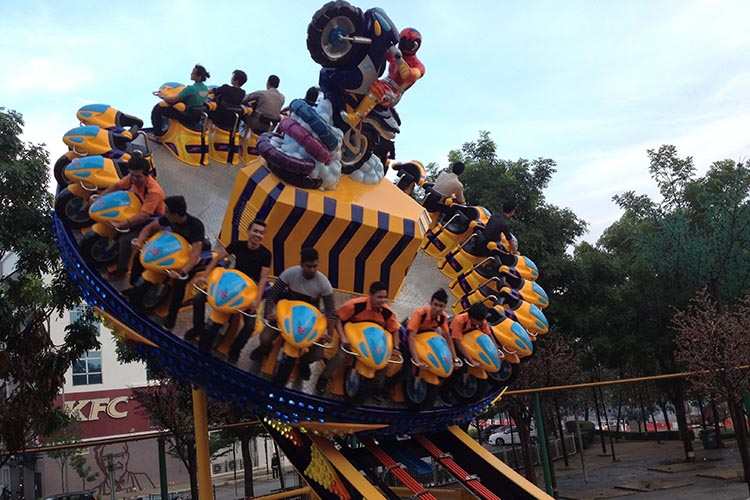 The I-City theme park in Selangor is known not only for its thrilling rides and attractions but also for its marvelous display of LED lights. The colorful display of LED lights would not fail to mesmerize anyone, be it young or old. Another major attraction of this park is the giant Ferris Wheel which you would be able to see even before you see the entrance of the park. Some of the major attractions of the I-City Park include the 5D Cinema, the haunted house, the wax museum, I-City Snowalk and Itsy Bitsy Fun World. The park also has WaterWorld where the major rides include River Adventure, Tornado Ride, Giant Jacuzzi, Spiral and Rainbow Slides, etc. 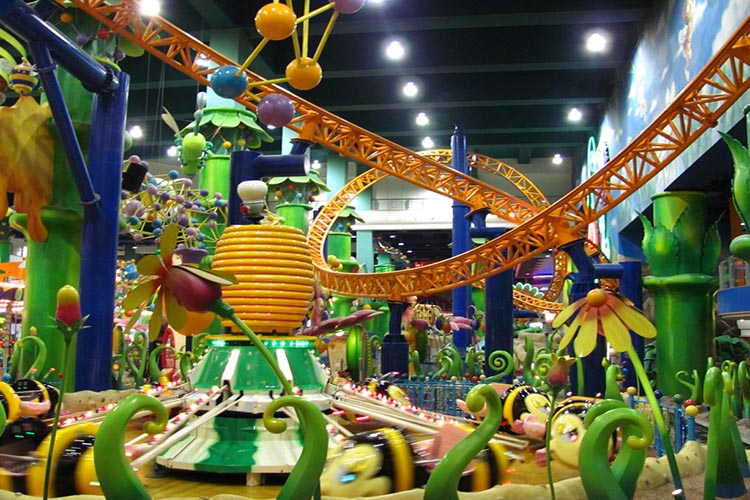 If the heat of the Malaysia makes it difficult to enjoy the theme parks, head to Berjaya Times Square Theme Park which is the largest indoor theme park in the country. Located inside the 5th and 7th floors of Berjaya Times Square shopping mall, this place offers 14 amazing rides, games and attractions for people of all ages, making it a great family-friendly destination. One of the highlights of the park is The Fantasy Garden, located on the 7th floor. With rides like Botanic Drive, Molly-Cool’s Swing and Honey Bump, this place offers great rides for kids. For slightly older children and adults the Galaxy Station zone with rides like Spinning Orbit, The Supersonic Odyesse and Dizzy Izzy would be more enjoyable.

The theme and adventure parks of Malaysia are some of the best in the world and hence are excellent Malaysia points of interest. Hence, make it a point to visit at least once of these theme parks to make your holiday in this Southeast Asian country a memorable one. So, what are you waiting for?

priya-ghatol is author at LeraBlog. The author's views are entirely their own and may not reflect the views and opinions of LeraBlog staff.