It was one of the big surprises of my amazing trip guided by the route of the most beautiful villages of France in Aveyron in the Midi Pyrenees region. I refer to the charming village of Conques and especially to the Abbey of Santa Fe, a Romanesque jewel of southern France. Conques Abbey is an impressive Romanesque church which will surprise with its huge interior height reaching 22 meters in the central nave. Built in 1052, it is one of the Romanesque churches with similar architectural features related to the Camino de Santiago among which are also the Cathedral of Santiago de Compostela and the Basilica of St. Sernin in Toulouse which I also had the opportunity to visit on the same trip to the Midi Pyrenees. On your visit to the Abbey of Conques known for its towering galleries unusual in Romanesque churches you will see a large collection of sculptures in their capitols. It was treasury to visit the Abbey of Conques with numerous art treasures such as shrines, some of which date back to the seventh and eighth centuries and among which the one on the Santa Fe. 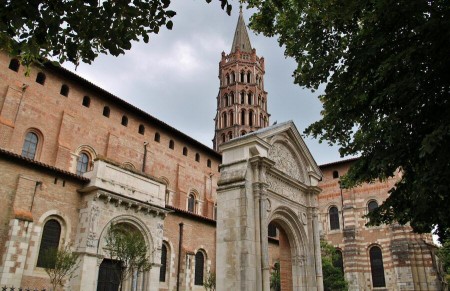 Without doubt the most important monument you will see on your walk through the historic center of Toulouse in the Midi PyrÃ©nÃ©es region in southern France is the Basilica of St. Sernin which I saw on my last trip to France. It’s no simple fact that it is the second oldest in France and largest Romanesque temple still standing in Europe. But the Basilica of St. Sernin is linked to the French Camino de Santiago pilgrimage, one of the main stages in the area along with the Abbey of Conques. Toulouse’s Basilica was begun in the late eleventh century to house the relics of that saint which legend says was martyred by being dragged by a bull in the year 250.

In fact, on this tour you will walk down the street Toulouse del Toro which recalls that event and is one of the most important and popular because it unites the historic center of Saint Sernin Basilica in the central square of the Capitol. From the architectural point of view there is no doubt that you will be surprised by its dimensions which stand to be at the center of a square. Built mainly of brick with decorative stone elements, outside stand high octagonal towers 64 feet tall with five levels. Another feature is the head with its five chapels spread around the apse. More interesting and artistic than the front door is the side door called Miegeville that you access after crossing a stone portico and where you should set the eardrum sculptural wealth built in 1110.

The interior of the Basilica of St. Sernin which I could not see in my walk through Toulouse due to it being closed is available in five ships and they said it is also very interesting to watch. There remains a lot for another upcoming trip to this French city. Visiting hours of the Basilica of St. Sernin of Toulouse are from June to September daily except Monday from 10:00 to 18:00 o’clock. During the rest of the year the timetable is from 10:00 to 12:00 o’clock and from 14:00 to 17.30 o’clock. For the same time you can access the crypt and ambulatory. Finally if you want to see the site of the tomb of San Saturnino you should go on the 29th of November, the day of the saint which is the only day that it is open to the public. If you like all this you can sign up for French guided tours on Saturdays from 10:00 to 12:00 pm and from 15:00 to 17:00 and for Sundays only in the afternoons.