Kitchen waste. It’s a huge problem in almost every area of the world. People eat, then they throw away perfectly good pieces of chicken bones and melon rinds. What can we do about this? 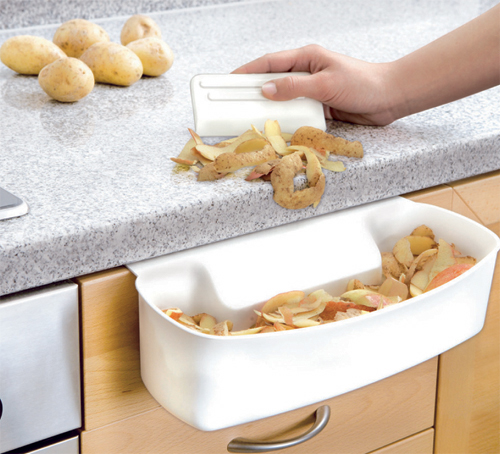 Well, we’ve set up the Working Committee to Eradicate Kitchen Waste. This Fall it will bring forward options for consideration at the United Nations Summit on Kitchen Waste Eradication (UNSKWE).

Here is the summary of options that the Working Committee (WC) will be presenting:

It has not been lost on the WC that a disproportionately large portion of kitchen waste can be traced back to people eating. If people around the world would simply stop eating, and the kitchen waste epidemic would solve itself. It must be noted that some exemplary countries have already made great strides in this direction, notably North Korea and several African and south Asian nations.

In the likely event that some nations will filibuster any attempt to end the wasteful habit of eating, some alternative methods of handling kitchen waste have been identified.

Throw kitchen waste into the garbage.

This is how most people these days dispose of their kitchen waste. Into the garbage it goes. The problem is that it then goes into the garbage truck. And then into the garbage dump. And food has been known to survive intact decades later, a monument to how wasteful eaters can be.

Feed it to the animals.

It is believed that man’s best friend got his title by following people around for scraps. People threw the scraps at the dogs, because they performed a valuable service, such as perhaps warning when danger was approaching. To this day, people still feed table scraps to their dogs.

Some modern homes have a machine built into their sink called a garbage disposal. It’s sort of like having a mechanical “Oscar the Grouch” living in your home. The tricky thing is to be really careful what you put in it-or what you accidentally drop into the sink. Here’s a good list of all the things you don’t want to accidentally let fall into the garbage disposal unit.

Most people flush some of their kitchen waste down the toilet. While this might make sense for stuff that sticks inside pots, like grease or what’s left of stew, it makes less sense for chicken bones and moldy melons. The WC will have to remind the UNSKWE, however, that this would be only a limited option, given how many people on the planet do not have toilets that actually flush.

If you live in a freehold house, you can create a compost heap (in rural areas) or set up a compost bin (in suburbia). Not only does this pollute less than to throw it in the garbage or to flush it down the toilet, but composting actually gives back to nature, creating nutrient-rich soil for your garden.

Composting is also a great way to feed it to the animals, at least in rural areas where compost is piled in a heap. Racoons, cats, foxes, crows and other animals will stop by to munch at the “buffet”.

Cruise ships do this all the time. And not just kitchen waste, but raw sewage and oily bilge water, too. Somebody tell them that Atlantic and Pacific are not the names of garbage cans, please.

Regifting to a neighbor.

Here’s a festive way to dispose of your kitchen waste; regift it to a neighbor, preferably the nosy one that you don’t like so much. It’s so easy to do. Just place the waste in a box and follow the instructions in this video on how to wrap gift boxes, then ring their doorbell.

“But it’s not my birthday. What’s the occasion?”

This is an idea the UNSKWE should take seriously. We could build a giant catapult and launch the kitchen waste over the border into North Korea, where it can be rebranded “gourmet”. This will feed the most starving citizens of our planet, neutralize a hostile army and provide great television entertainment all at the same time.

It is a time-honoured tradition to launch kitchen waste at lying politicians and comedians that aren’t all that funny. Just as Fozzie Bear. One typically throws rotten tomatoes and rotten eggs, which is where the expression “egg on his face” comes from.

The only mystery that remains is why so many people came to the meeting with pockets full of rotten eggs. Perhaps they simply didn’t know enough North Koreans and had no access to a cruise ship.

In the end, if you can’t get rid of it, just save it. That’s what one craft grade-six student did every day when he came home from school. So as not to tell his mother just what he thought of the lunches she packed for him, he would empty his lunch can under the basement stairs. And he never got caught…until one day something smelled fishy while heading into the basement.

Information offered by Kris Anderson, He is an investigative journalist who seeks out the unusual stories that major media are two uninspired to cover.