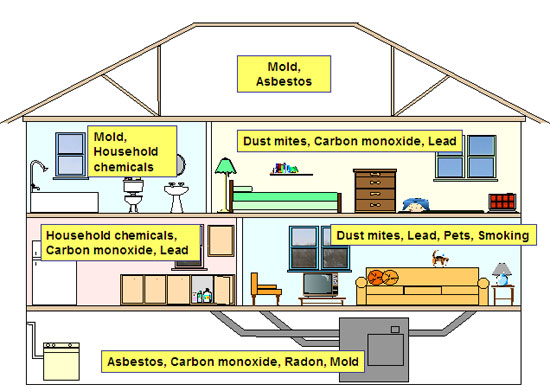 While most people tend to fear violent, unexpected causes of death such as car crashes, murders, or plane crashes, there is a widely-known bit of statistics which says most fatal accidents happen in the home. Domestic incidents that result in serious injuries and even in death account for over 4,000 fatalities each year. In 2002 alone, 2.7 million accidents, whose victims required hospital care, occurred - 477,500 of those victims were children under five. The often overlooked reality is that there are more perils that affect home safety and endanger one's life, than there are odds of violent death. Being concerned with the dangers that lurk inside one's home is not pessimism, it's facing up to the facts: homes are more dangerous than one might believe. And if your house was built before the late 1970, chances are that it has some structural issues. Of course, taking a fatalistic approach to the reality of an old home, made of timber, will not solve any actual problems. Being proactive about the issues that need to be taken care of is a far better way of going about it. And this sort of attitude is first and foremost built upon information and education. Read on, to understand what dangers you might be unwittingly exposing yourself to, right inside your own home.

The most annoying thing about old houses is that they are made partly or entirely from timber, and while this might look great, it doesn’t feel too awesome for the homeowner. Termites, for example are the archenemies of timber. These feisty little creatures will chew through anything that comes in their why. This is why the cost of termite treatment is more than justifiable, especially if you understand that structural damage to the wooden elements inside your walls and ceilings might cause fatal injuries.

Lead is a heavy metal which was once used to create gasoline, interior and exterior paint. The primary sources of residential lead can come from dusty homes, polluted urban regions, lead in the soil or lead which can be found in food. If you are suffering from lead poisoning that you should know that overexposure to this substance can result in neurological problems, especially for infants, aggressive behavior and memory loss. While such a condition is rare and relatively unbeknownst, even to the more experienced health care practitioners out there, it doesn’t mean it doesn’t exist or that it just ‘can’t happen to you’.

You probably already figured out from the name that volatile has something to do with stuff burning to a crisp, and you are right. You should definitely be worried about over exposure to volatile organic compounds. Overexposure to VOCs can lead to respiratory problems, difficult living conditions for elderly, throat irritation, loss of coordination and kidney damage. VOCs are usually used for pesticides, so you should make sure that there is no fire source open, while your home is inspected.

Have you ever heard of Radon before? This radioactive, odorless gas is produced by the natural decay of uranium in the soil. Radon is warm, and as a result it moves through the ground, and enters a home through small cracks. As if this wasn’t bad news enough, it can also travel through water. According to recent studies, 21.000 lung cancer deaths per year are caused by radon.

Obviously, this is not an exhaustive list of all the things within your home’s walls that are dangerous and scary. As a matter of fact, construction materials and building conditions are likely to cause an entire host of passive home killers. And, of course, while one can’t safeguard against absolutely all health risks, issues, and potential damage sources, many accidents can be prevented with a bit of foresight and proper information. Disregarding information about such risks, in this self-proclaimed ‘age of information’ would be nearly absurd. Think about it: you may be young and in shape right now and not placing too much value on your health. But as it wanes, you will come to cherish it in the future, so make sure you take care of it.