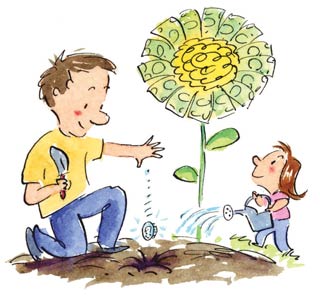 Most people complain about the cost of their household bills, whether it's heating, electricity, gas or water which seems to be draining your money. However, while there is no quick and easy solution to making your bills disappear or drop drastically, you can do small and simple things around the house which will help to cut down the cost of your household bills.

1. Don't fill the kettle up all the way

When you go into the kitchen to make yourself a nice warm drink, only boil as much water as you need. You're using more electricity to boil a kettle full of water, which will only have to be reheated later anyway! Most kettles have measurements on them, so work out how much water you need for one cup or two cups etc.

You should try to turn off the taps whenever they don't need to be running. For example, fill a washing bowl and wash the dishes in the water rather than washing them under a running tap. Just think how much water you're wasting! Consider using the bath less and the shower more since this will save you money on your water bills too.

Yes, they're actually using electricity while they're on standby, so if it's not necessary to leave it on, turn it off! This should include your television, computers and other electrical devices. You may need to leave certain appliances plugged in, such as a television if you're recording a programme, but things such as hair dryers, computers and lamps can be unplugged each time.

During the winter months, buy a draught excluder to keep the cold out of the room instead of having the heating on all day long. Draught excluders are fairly cheap to buy and will make a massive difference to the temperature of the room during the winter. Some of them come with very cute designs too, so you don't have to worry about it looking unfashionable in your home!

It might seem like a tedious task, but it's worthwhile changing all your light bulbs to LED bulbs, since this will save you a lot of money on your electricity bills as well as being good for the environment. Some councils and local authorities will give you a set of energy saving bulbs completely free of charge, so it's worth phoning to ask what they can offer you.

If you don't already have loft insulation, consider getting it. This is something which is being encouraged in Western countries in modern society, since it is very beneficial to the environment as well as to individual homes. Like the draught excluders, loft insulation will help to keep in the heat, which means you won't feel the need to keep turning the heating up when the weather gets colder.

The weekly shop is one of the household bills which seems to take up a large percentage of a family's budget, so why not try out some different supermarkets to see if you can get a cheaper deal on your groceries. Search online to see what people have to say about the cost of food at supermarkets in your area, and see if there are any special offers or deals which you can take advantage of. A lot of stores offer loyalty cards or points each time you shop, which mean you'll get vouchers, coupons and money off certain things.