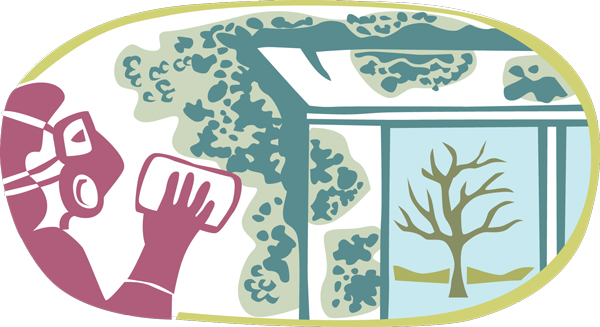 Detecting the presence of mould or mildew in your home is no laughing matter. Building pathology reveals that apart from being a health hazards, these fungal infestations can also spread faster than a forest fire in a gale, and they make walls, ceilings, tiles – in fact, any surface – look and smell awful. Getting rid of mould or mildew in your home should be a top priority.

Initially, you may wonder how on Earth it got there in the first place. Mould and mildew are types of fungi – mould is black or green, while mildew is grey or white – that develop and grow in damp and humid areas of your home. And as we should all know, damp, over a prolonged period, can seriously damage the structural integrity of your house.

Mould can also cause all sorts of health problems, particularly in young children and the frail and elderly. For those with skin conditions, exposure to mould and mildew can be very harmful. It can compromise the immune system and cause respiratory issues like asthma.

Causes of mould and mildew

Humidity, or a high level of moisture in the air, is the main cause of mould and mildew. The fungi will only start growing on a surface after being exposed to wet or dampness for over 24 hours, so it’s usually a symptom of a long-term damp issue. Statistics show that 1 in every 18 properties in England has a damp problem of some sort or another.

Of course, there are different types of damp, and you need to find out which one is causing your problem before you can get rid of it for good. One of the biggest problems is condensation, typically but not exclusively found in steamy rooms such as bathrooms – and this why mould and mildew can often be found there. If you don’t have a condensation problem but your house still suffers from mould and mildew attack, the cause may be rising damp.

For coastal properties, the higher humidity and moisture levels in the air can lead to mould spores developing. A few weeks of rain could also cause the humidity in your home to rise. If you notice that the mould is worse in one particular area, it could mean there’s a leak in your gutters or your internal walls.

Whatever the problem may be, it’s best to get it checked out by a mould specialist or professional building surveyor.

How to rid your property of mould and mildew

Start by removing the mould and mildew from the areas concerned using a specialist mould cleaning spray. You could also mix your own – one part bleach to four parts water is a very effective mould and mildew killer. During cleaning, it’s a good idea to wear rubber gloves, goggles, and a dust mask. Mould is unpleasant stuff and you don’t want to inhale the spores.

Remove mould with a damp cloth, rubbing gently, then dry the area well with a soft cloth. Because mould and mildew like warm, moist and dark spaces, keep the curtains open (and windows unless it’s too cold) during the day for plenty of natural light and air. If you see any condensation forming on walls or ceilings, dry the spots immediately. Regular dusting and vacuuming will also help to get rid of dormant mould and mildew spores and prevent them from ever coming back again.

To prevent mould and mildew from returning, you need to find out exactly what’s causing the damp in your house. If it’s condensation, then you need to invest in a bathroom fan, or some dehumidifiers and keep the bathroom doors tightly closed so as not to spread the problem to other areas of your home. Make sure you open a window after a shower or bath, when cooking on a stove or using a tumble dryer to remove as much possible of the moisture released into the air.

If the mould problem was caused by water leaking into your home from blocked or damaged gutters, then have these repaired or replaced as quickly as you can. Mould can sometimes be caused by leaking pipes within your internal walls. If this is the case, you should get a professional surveyor to assess the damage, then instruct a reputable builder to remedy the problem. If your property is suffering from rising damp, a building surveyor should also be your first port of call.

Good ventilation is key – it is damp, mould and mildew’s worst enemy. Once you’ve discovered where the damp originates from and have removed the problem, keep those areas well ventilated at all times.