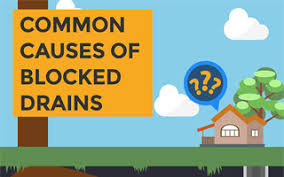 Blocked drains are a nuisance, and a health hazard with the swarming of toxic bacteria and offensive smells. They can be caused from a number of reasons, and a householder will likely experience a blocked drain at least once every so often.

Knowing the cause of blocked drains in most circumstances can help prevent these, and when all else has failed, calling a licensed plumber will resolve it.

Tampons, pads and other foreign objects, including a large amount of toilet paper in one sitting can cause sewerage pipes to back up and clog around S-bends.

A plumber in this situation needs to be called due to the significant health risks, and will bring grinding equipment to place into the pipes in order to eliminate the blockage.

It is a wise idea to have an alternative place to go to while the problem exists, so that the problem isn’t compounded. A blocked sewerage system can be extremely distressing, and is treated as a plumbing emergency. Lots of licensed contractors have an emergency after hours callout service.

Ensure that all members of your household know to properly dispose of their sanitary products by wrapping them and placing them in a bin.

Conveniently have brown paper bags and a covered waste container with a bin liner, and empty it at least twice daily while women are menstruating to assist in both hygiene and a functioning sewerage system.

Hair is a common reason for drains getting blocked; it accumulates over a period of time. When soap and other body cleansing products get washed down and stuck in the hair clumps, it causes a drainage problem that can seize pipes.

Ensure that you remove hair from the outlet on a regular basis. Use gloves and other precautionary sanitary measures.

Grease, oil and leftovers from cooking disposed of down the sink can cause clogging and blocking of drains. The grease and oil solidifies as it cools, and food debris caught in the clumps of oil can cause bad pipe blockages and the build-up of bacteria.

Offensive smells emanating from bathroom and kitchen sinks are a good indicator of this occurring. In this case, ensure that all cooking waste as it cools is wrapped up in waste paper, and disposed of in the garbage.

Some chemical products can be placed down the sink to dissolve the biological blockage, but are caustic and should be used according to the manufacturer’s directions to promote safety.

If blockages do not resolve after these two measures have been implemented, then a tradesperson should be called to fix the problem.

Trees are often attracted to pipes if they have sprung a slight leak, and the roots will grow towards them, infiltrating the crack in the pipes in order to gain moisture.

Roots can take over the entire pipe, and combined with hair and other contaminants entering the drains, the pipe can completely seize up, causing a hazard.

In this case, an emergency plumber will need to be called, and in the worst case scenario, the pipes will have to be dug up and replaced if they have had significant damage due to roots growing into them.

Leaves and other plant matter can also gather in guttering, causing blockages in downpipes and getting into the household waste pipes. By ensuring that your guttering is well maintained and cleared of debris, you can help prevent this from occurring.

When planting trees and shrubs, be sure to plant them away from your water pipes and drains, and this will help prevent damage due to root systems.

Poor installation of water pipes, broken pipes, excess rain and storms, and leaking taps can cause an overload of the household plumbing system.

Preventive maintenance and having pipes and watercourses installed by a licensed contractor, having the right sized inlets and correct choice of fittings will ensure that these problems can be minimised.

If there are any major problems with pipes external to the house, or storms or heavy rainfall have occurred, local councils have an emergency after hours contact number where workers will be sent out to deal with any issues related to council provided services.

Blocked drains  are a health hazard, and a major inconvenience to household residents. Being aware of some of the reasons for the causes of seized water fittings will help prevent these problems occurring.

Some blockages can be resolved through chemicals that dissolve biological clogging, but if unresolved, a licensed contractor can quickly diagnose and repair the issue.