Is your home slowly killing you? Of course it isâ€”after all, that is what all marketing agents tell you. Acidic water! Formaldehyde in mattresses! Fluoride! Electromagnetic voltage! We are constantly bombarded with dubious fearmongering which aims nothing but to sell us useless products.

But that’s not to say your home isn’t killing you. It does, in sinister ways. And you can’t stop it with “buy-one-get-one-free” products. Here are 7 ways your homicidal home is making you kick the bucket. 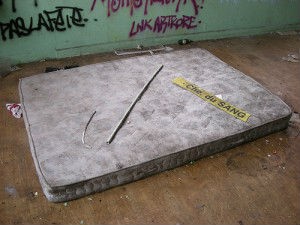 Wait, didn’t we just say the formaldehyde mattress craze is just a myth? Yes, it is. Many manufacturers label their products as “organic” and claim non-“organic” mattresses contain dangerous chemicals and toxins. Today, that is simply not trueâ€”the industry has stopped using such chemicals long ago. But if the mattress on your bed has been produced before the 1990s, there is a good chance there is a fair amount of formaldehyde inside. And formaldehyde is stuff you definitely don’t want close to your face while sleeping. This is the main chemical used during embellishment. They may also contain chloroflurocarbons, volatile organic compounds and other scary-sounding substances. Ditch the old sleeping surface for a new one, and you should be fine.

Otherwise your bed will go full Chuck Testa on you. 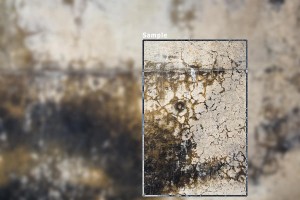 Mould is omnipresentâ€”mould spores are a common component of house dust, there are mould growths on your food, walls and even clothes. It grows fast, it is hard to detect, and it emmits dangerous mycotoxins. By “dangerous” we don’t mean “causes a mild infection”. No, we mean “carcinogenic, hallucination-inducing concoction”.

Luckily, the most dangerous mould species are also the rarest, right? Wrongâ€”Black mould is deadly and encountered on daily basis. Of course, “black” brings association with the Black Plague, which isn’t too removed. Unlike most moulds, it is slimy and black-green in colour. It releases aflatoxinâ€”a neurotoxic compound which kills neurons in the brain and nervous system. Aflatoxin causes tremors, confusion, personality changes and mood swings. Wait, those are only the minor inconveniences you can experience. Exposure to black mould leads to brain fog, slowed reflexes, memory loss, anxiety, depression, hallucination, numbness and seizures. Non-psychological impairments include blood coughing, sore throat, bleeding gums, pulmonary edema and hemorrhage. Severe exposure leads to damage to the heart, cancer and death.

Worst of all, black mould is literally everywhereâ€”in your home, in your food, in your clothes and in the air. This isn’t just random mumbo-jumbo salesman pull of to sell their products. In 2014, a fire brigade in San Francisco was forced to evacuate its firehouse due to mould infestation. Doctors have speculated acclaimed actress Brittany Murphy passed away due to mould in her home. Even peanut butter isn’t safeâ€”recent studies indicate peanut butter allergy is actually a reaction to black mould spores, commonly found in raw peanuts.

Pretty dark stuff for a patch of black fungi casually growing around your home.

What can be worse than a toxic mould which insensibly, slowly and painfully kills you? What about a deadly odourless gas which kills you overnight without any trace?

Carbon Monoxide claims 50 victims each year in the UK alone. All it takes is a malfunctioning burning applianceâ€”furnace, room heater or fireplace (especially fireplaces). Worst of all, there is no way to detect carbon monoxideâ€”it has no colour, taste or smell, and doesn’t cause any irritation (until too late). If you are lucky, you will experience only confusion, vertigo and light headache. If you are unlucky, your nervous system and heart will be left with permanent damage. If you are truly unlucky, you will drop dead in minutes.

Thankfully, there are cheap alarms for carbon monoxide detection. I wouldn’t bet on them to wake me up in the middle of the night while I’m suffocating, though. 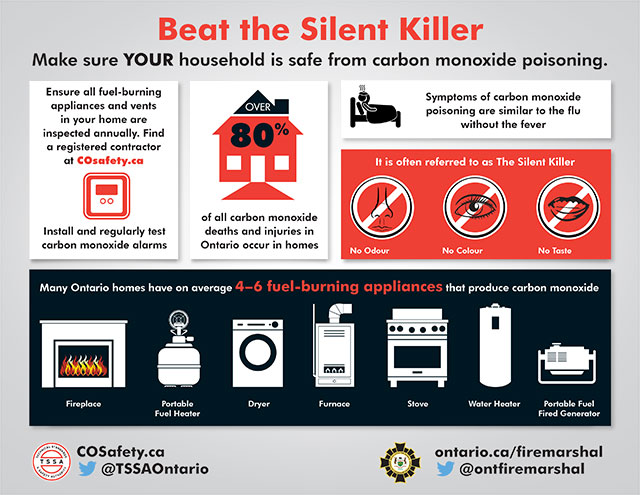 If there is something carbon monoxide does right, it is leaving your body intact. Methane, on the other hand, is highly flammable and even explosive. Leave it to build up in your pipe system, and you have all the ingredients for a home-cooked disaster. It’s not a good idea to inhale it eitherâ€”it causes dizziness, nausea and headaches. Eventually methane exposure manifests itself as depression, memory loss and even epilepsy. And this is the scenario with a better outcome. The real trouble starts when you light a cigarette. It ends just a few seconds later.

If you are lucky, the methane in your house will come from a sewage pipe, with all the gross smells associated with, well, sewage’s content. If you are unlucky, there will be another source of methaneâ€”like gas leaks. By itself, methane is odourless and colourless. Combine it with carbon monoxide, and you’ve got a pretty sweet concoction of silent killers in your home.

No, we’re not talking about your 70s hair metal vinyl collection. We are talking about the joyful bright colours of your walls. Up until the 1990s lead was one of the main component of almost all commercial paint products. Prolonged exposure to leadâ€”such as every day, at your houseâ€”can leave permanent damage to the neural system, especially in young kids. High-blood pressure, anemia, brain damage, kidney failure, and infertility are just some of the guaranteed “side-effects” of lead.

Thankfully, lead usage in household paints has been banned in the UK since 1992. We put “thankfully” at the beginning of the previous sentence to draw your attention away from the fact that until 1992, we painted our walls with haemorrhage-causing killers. If your property was built before 1992, there’s a good chance there are still lead footprints on your walls.

Have you seen old high-rise estates being torn down to their core structure before controlled demolition? Have you wondered why does it take so long for those buildings to be prepared for the implosion? Why are the contractors so precise about taking every possible wall down? There are numerous answers to this question but one weighs in much more than the restâ€”asbestos. 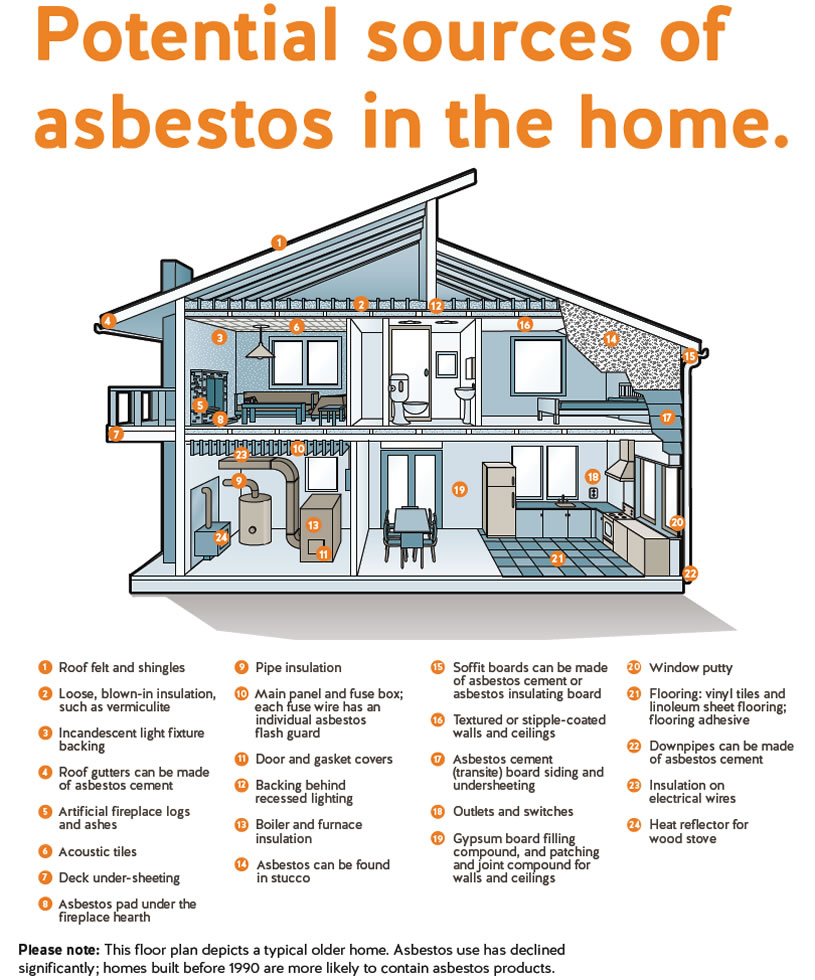 Asbestos is a naturally occurring silicate mineral popular among builders of the past. It is inexpensive, fire-resistant, provides shock absorption, and electrical and building insulation. It is also highly toxic, carcinogenic and deadly. Luckily, it has been banned in the UK since the mid-1980s. Unluckily for us, it has been used extensively for the construction of almost every multi-storey building prior to that.

When inhaled in large quantities, asbestos causes lung cancer. Remember the massive cloud of smoke produced by the collapse of the buildings during the terrible 9/11 terrorist attacks? There were 400 tons of asbestos in the World Trade Centres, most of which dispersed in the air. This has been linked to the growing rate of prostate and lung cancer cases in Manhatten post-9/11.

Yes, the same fire insulator found in your home has been linked to an increase of 50,000 cancer cases.

Most of our entries seem too niche. Granted, mould appears almost everywhere but only few of us experience severe infestation. The same goes for the rest of the entriesâ€”genuine hazards but none the less it is unlikely you’ll encounter them in large quantities. Guess what? There is a chemical in your home, much more dangerous than formaldehyde in mattresses! You expose yourself to large quantities of it on a daily basis, willingly so!

Every time you clean your home, you are in contact with bleach. It is utilised in almost every household chemical and leaves a devastating footprint. You’d think strong airflow will solve the problem but its toxic fumes aren’t so easily dispersed. They cause severe rashes, redness and eye irritation. Inhale just a little chlorine bleach fumes, and your nose will start bleeding. Breathe the fumes for a few more minutes, and severe headache will settle in. 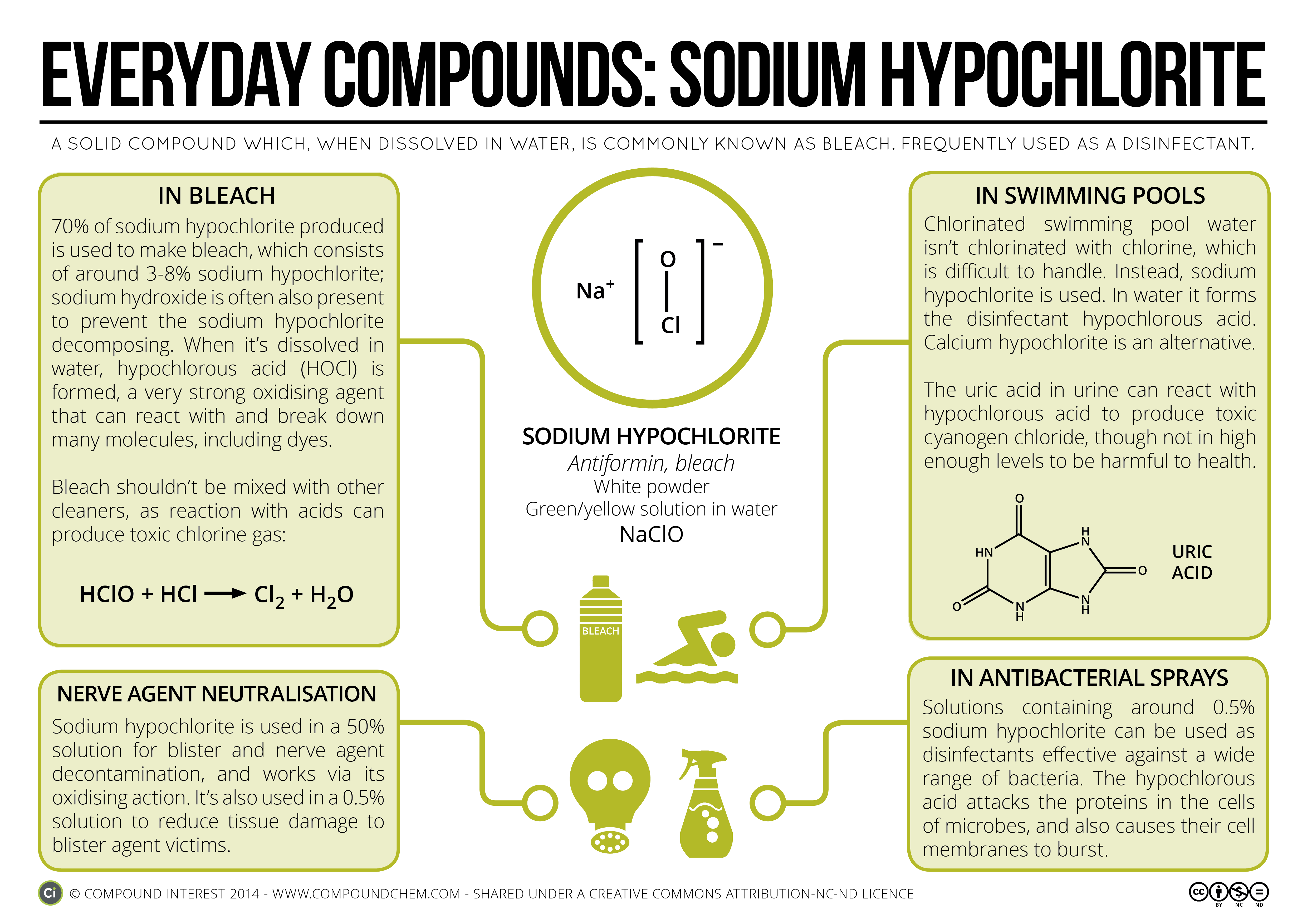 Moreover, bleach is more commonly found in detergents sold over-the-counter. If you plan a comprehensive cleaning of your property, you may want to save some cash and buy cheap cleaning agents. However the cheaper the products are the more likely they use bleach. That is why many people prefer to book professionals for such tasks. Various companies who offer services such as end of tenancy cleaning in London and outside the capital have appeared because people prefer somebody else to do this dangerous work for them. Luckily, most specialists use reliable detergents providers and follow COSHH regulations, so there is little to none bleach in the cleaning agents they use.

AudreyW is author at LeraBlog. The author's views are entirely their own and may not reflect the views and opinions of LeraBlog staff.