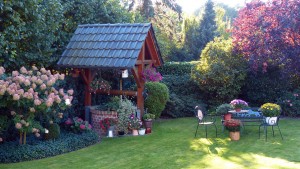 Garden design is the art or the process of creating beautiful plans for layout and planting of gardens and landscape. This beautiful design of gardens is achieved through gardeners who have some special skills and expertise in horticulture and the principles of design.

In a professional and standard garden design, some elements have to be considered like the layout of the landscape, water paths, the plants themselves and decking.

This article discusses the best garden designers and how their work is truly shaping the way we garden:

In 1988, Titchmarsh was offered a slot on BBC Radio 2 hosting a gardening show with Gloria Hunniford calledHouse in a Garden.

Few of the awards given to Titchmarsh include;  Member of the Order of the British Empire (MBE) in the 2000 New Year Honours for services to horticulture and broadcasting and “public face of 2010“, an honour given to him by B&Q.

Biggs’s expertise and professional garden design has given her the opportunity to hold the title for first female director of Royal Horticultural Society (RHS), a position she took in 2010 after having spent 25 years in the travel industry.

Born 1956, Biggs’s admitted that the switch to this career was totally unplanned as she lacked the horticultural experience required for the post. However, she added that her 18 years of RHS membership helped a lot.

Don pursued a career in writing after the collapse of his company during the 1990s. From 1994 to 1995, Don appeared as a guest presenter for the BBC’s show This Morning where he talked about gardening segment.

Don received his formal training in 1995 as a professional gardener and wrote several gardening series including Don Roaming, Fork to Fork, Real Gardens and Lost Gardens between that year and 2006.

Don became the lead presenter for the BBC’s flagship Chelsea Flower Show coverage in 2014 and replaced Titchmarsh who had presented the coverage of the show for some 30 years.

Mr. Fane is the master builder of Chelsea Flower Show 2009, he has won 12 medals during the show for his outstanding job. Most people have never heard of him because he has severally mentioned in interviews that he always wants to remain in the shadows.

Christopher Woodward, 55, grew up in Surrey London. He is currently the director of the Garden Museum, a post he took in 2006. His passion for garden design has given much inspiration to culture of curated exhibitions, programmes and events that have now turned the garden into a world class garden hub.

Woodward through the museum, is a trustee of the Heritage Lottery Fund where they distribute money to public parks and landscape projects.