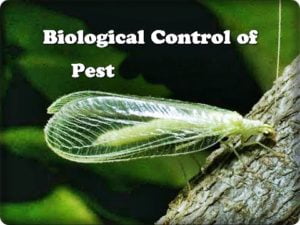 Pest control by biological methods involves the use of certain insects, fungi, bacteria, etc. against pests and can be an alternative to chemical treatments.

The main pests fought by the biological means in vegetables are: the greenhouse moss, the red spider and the fleas.

The species Trialeurodes vaporariorum is very harmful not only in the greenhouse but also in the field and in the solarium, especially for the tomatoes, because of the sweet secretions that it deposits on the leaves. Its presence disrupts the growth of the plant and decreases production.

For a long time, entomologists and cultivators have developed a method of control, using the parasite Encarsia Formosa, a small wasp (0.6 mm long), which has the black thorax and the yellow abdomen. Adults of this species actively fly in summer and spring, generally in good weather, and the parasite lays its eggs in the larvae of the whitefly.

The eggs hatch inside the “scales” after four days, the larvae feeding for eight days before becoming pups. At this point, the color of the scales changes from white to black-brown, confirming the parasitism.

The parasite does not consume any plant material (minus the sweet secretions deposited on the leaves), nor any other insects and is introduced when the first small greenhouse moss appear, and the balance must be optimal.

The presence of greenhouse moss and sweet secretion on tomato plants is a source of food for the parasite.

The ambient temperature should be above 13°C, since, depending on the temperature, the parasite can “track” its prey in field crops.

• The “pest-in-first” method: several whiteflies are introduced into the culture 14 days before the parasite is released (at an attack rate of 20 larvae per plant). Predator control is performed in 12 weeks.

• From 15 to 15 days, starting from the time of planting, 8 parasitic larvae per plant are introduced into the culture.

Chemical control is generally ineffective against this highly polyphagous pest, which can cause harm to most cultivated species and, in particular, cucumbers.
The most commonly used predator is a very mobile red-orange mite, called Phytoseiulus persimilis.

Each female Phytoseiulus lays 50-60 eggs for 3-4 days, which hatches in 2-3 days. The complete cycle lasts 7 days, ie half the time needed for the red spider for the same evolution.

Due to high mobility and feeding needs, the parasite is very effective in searching for prey, each female devouring up to 5 adults and 30 eggs (or young spiders) daily.

As in the case of Encarsia, the predator’s survival is related to the presence of its prey. Unlike Tetranychus urticae, Phytoseiulus does not hibernate and should therefore be brought in every spring.

One of the methods used is to introduce 20 tetranicus on each plant 10 days after planting and after 14 days two phytoseiulus are placed on two plants. This is the same “pest-in-first” method, in which the pest is introduced before the predator to ensure the food of the latter.

Control occurs after 4-6 weeks, but Tetranicus urticae must be reintroduced after 3-4 weeks.

On tomatoes, where the density of the plants is higher (four times the number of cucumbers), another technique should be applied, which could consist of launching 20 predators per plant in “infestation spots”.

Vegetable crops in the field and in protected areas are attacked by several species of fleas, such as the Green Peach Flea (Myzus persicae) and the Black Fleas (Aphis fabae).

Fleas are particularly resistant to pesticides. Some natural parasites limit the attack in the field and can accompany pests and protected areas. In particular, in the latter conditions, the impact is variable, depending on the cultivated species, the density of the pest – the fleas, etc.

In Western European countries, environmental pollution and toxicity of chemicals to human health have led to the development of biological warfare both in the field and in protected areas.

The advances achieved in the biological control of the main pests have made the biological fight a safe, effective and clean weapon within the reach of all agricultural producers. Among the factors that require the development of biological methods for  local pest control we mention:

• the phenomena of resistance of pests to pesticides;

• the difficulty of using very toxic products, as a result of the production that is consumed most often in a fresh state;

• the impact on the environment by polluting the air, water, soil and, finally, the production for human nutrition;

• increasingly strict regulations regarding the use of pesticides.