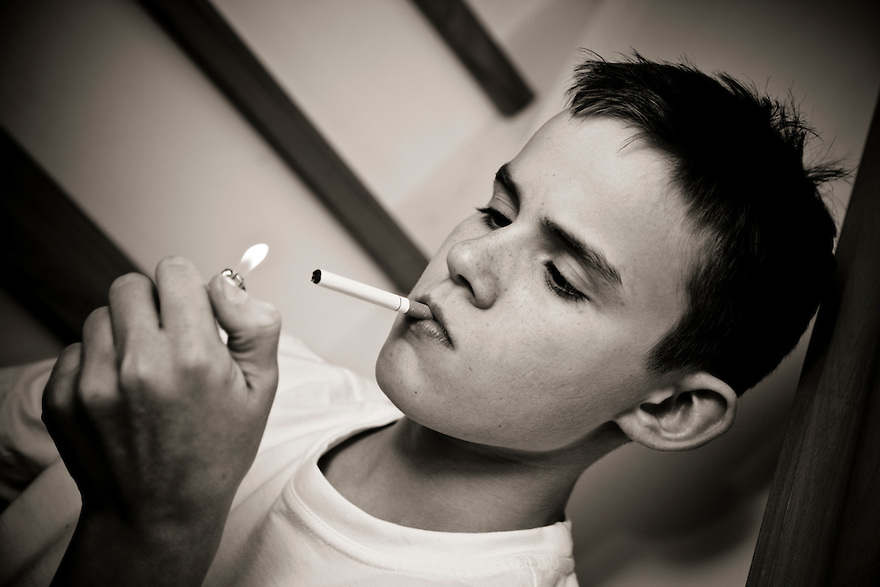 Even though according to government statistics the numbers are down for teens beginning to smoke, there are still thousands of teens that start smoking every year. Teens are clever and are able to hide things, like smoking, from their parents until it's too late. However, if parents keep a keen eye out for the signs that their teen may be at risk for starting to smoke, they may be able to stop their teen from making a choice that could harm their health through open communication and support.

They have easy access to tobacco and/or smoking areas. Teens that have easy access to tobacco and smoking areas are more likely to start smoking due to the sheer ease of availability. Many schools have closed their smoking areas in an effort to curb teen smoking and to give the message that the school doesn't support teen smoking. As with most things, teens don't want to have to work at getting cigarettes, but if they can get them easily, they are significantly more likely to begin smoking. If parents are concerned about their teen, they should first check to see how easy it would be for their teen to get cigarettes either from home or from friends.

Their family and/or friends smoke. A teen whose parents or friends are smokers are much more likely to start than those who are around non-smokers. Not only are cigarettes and smoking areas easily accessible, but there is an instant support network already around them. Even if parents tell their teen not to smoke, if the parents smoke, their teen is more likely to start. Teens that have friends that smoke may begin smoking themselves due to peer pressure or to feel like they are accepted of fit in. Parents need to remember that "do as I say, not as I do" will not work with most teens. If a parent that smokes wants their child not to start, they will most likely have to quit themselves in order to limit their teen's access to tobacco products and demonstrate their commitment to the family living a smoke-free lifestyle.

Their school performance is poor. Students whose performance in school is low or if they are struggling to maintain their grades have a greater risk of starting smoking due to seeking a sense of calm that can be gotten from the introduction of nicotine to the body. Also at risk of using other drugs, students who are struggling or failing in school may be suffering from depression or anxiety about their grades and their futures. If your student is struggling in school, it is essential to address the issue and really listen to what they have to say. By helping your teen raise their grades, you are adding to their sense of self-esteem which is essential to keeping them off cigarettes.

They use other substances. Teens that use other substances, such as alcohol or other drugs, are more at risk to start smoking than those who don't. If they are already using, they already know the effects of adding a drug to the body so starting to use tobacco and nicotine isn't a big step. Teens who are already using drugs or alcohol have established their habits and patterns of hiding their usage and procuring their substances of choice. If you think your student is using drugs or alcohol, you should seek professional assistance through a drug or alcohol counselor. Teens that are using drugs need immediate, professional help in order to beat an addiction.

They are not involved with school or organized activities. No matter what your teen says, they want to be involved and included in something. If they aren't involved in school or other activities, they will seek that connection with other teens in some way. Teens who smoke tend to spend time with other teens that smoke, creating a group based on that common interest. While involvement in school and activities won't completely erase the risk of a teen starting to smoke, it does provide a sense of belonging and, if your teen is into sports, a reason to be focused on keeping healthy. Parents need to be aware of who their teen is spending time with and be sure to know your child's friends. If your teen isn't a "joiner" and likes to be alone, it is essential to keep your lines of communication open in order to be sure your child hasn't picked up the smoking habit just to feel a part of something.

Teens think they are invincible and don't think about long-term effects of things they do. Most smokers started smoking when they were teens and were fully addicted by adulthood. While any teen can start smoking, those who have risk factors are more likely to start. Parents are able to intervene by looking for their teen exhibiting risk factors and stepping in by opening lines of communication and getting outside help when needed. Even if your teen balks at you "interfering in their life", they will thank you later when they are living a long, healthy, smoke-free adult life.