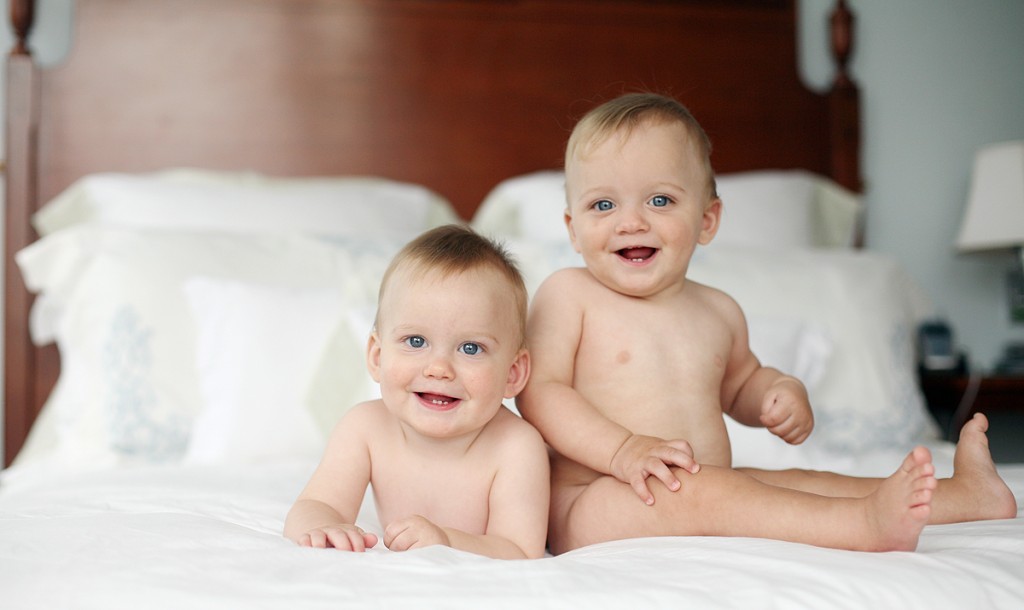 Most parents, when they see twins say, for example, “I’ve always wanted twins.” Whenever they see someone with twins they ask, “Where they born naturally?” “Are they identical?“, “How did you get them? ”

If you are pregnant with twins you are probably wondering what the symptoms are. Most mothers of twins say that they have all the usual symptoms, only duplicated. Many speak of the increased morning sickness, frequent vomiting. Some complain that they sleep 10 times worse than with the last pregnancy or sleeping worse than they expected during the pregnancy.

Under the “very positive” test result to determine pregnancy means that even if you do test a day or two after the menstruation absence the line (or + sign) on the test is clearly present and shows that you are pregnant. In most cases when the test is done this early the test line is pale.
Pregnancy tests measure the level of HCG (human chorionic gonadotropin), and it is believed that a woman carrying twins has elevated levels of this hormone, and therefore the test result is visible.

If the belly starts to grow faster than it should, the doctor will suspect that it is a pregnancy with twins. Check the growth of the uterus at each visit. After about 12 weeks it can seem a bit larger than expected. This could mean that you will have twins or that the date of conception was calculated incorrectly.

Due to the rapid growth of the uterus, and large amounts of amniotic fluid, the mother of twins, in most cases, is gaining weight faster. In the first trimester can gain up to 10 pounds, at the end of the second trimester 14-22 pounds, and by the end of pregnancy up to 40 pounds.

Of course, this largely depends on many factors including the weight of the woman before pregnancy, and about how much weight is enough to gain during pregnancy it will be best to consult with your doctor. However, do not be surprised if after 6 weeks you are not able to wear your old clothes.

Some moms of twins indicate that they felt as if they had an octopus in their stomach. They complained about the constant movements in all directions. And it can be one of the signs of a pregnancy with twins.

Most pregnant women feel first movements only at about 18-22 weeks. It is very likely that a woman who is expecting twins will feel the baby moving in the stomach early on. However, this should be considered as a conditional fact, for women who are pregnant for the first time may not know to determine what it is exactly that they have felt the movement of babies.
Also, it is possible that one baby is very lively and you cannot be sure that there is another baby in the stomach.

For many mothers who feel no other unusual symptoms, this may be the first sign to suspect that perhaps they are expecting twins. High results in the AFP test show either an abnormality of one baby, or the existence of two or more babies. After this test, a doctor will schedule an ultrasound examination or other tests to determine why the results are high.

There are several ways to prove that you are carrying twins. The most common is an early ultrasound check up. However, if the ultrasound check up is done too soon it may happen that one baby has not yet be seen on the ultrasound, and thus gets the impression of a normal pregnancy! Such (premature) ultrasounds are done when possible problem is suspected such as bleeding, etc.

An ultrasound can be used to monitor a pregnancy with twins and early detection of potential problems such as missing twin syndrome, twin transfusion problems with growth, etc. It is common to set up an ultrasound once in each quarter. Of course, if there is a problem more often.

It is necessary to know that often intense symptoms appear that have nothing to do with carrying twins, while many women have much less nausea with twins than they had while they were pregnant with one baby, etc.

And finally, if you have more of the above symptoms, which make you think that you are carrying twins, you should consult with your doctor who will readily confirm or deny your suspicions. Ultrasound and sometimes only by palpation it can be disclosed easily. Do not rely only on the symptoms and laboratory findings.

MayaWeber is author at LeraBlog. The author's views are entirely their own and may not reflect the views and opinions of LeraBlog staff.