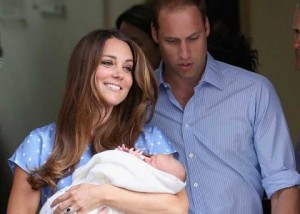 There's no doubt that Royal Baby Fever is still high in the UK. From the birth to the Christening, Prince George continues to be a much discussed topic of conversation in anything from women's magazines to broadsheets. Sales of Prince George memorabilia are still high, and Britax UK are even selling baby carriers featuring a limited edition fabric which is incredibly similar to the one which lines the carrier used by William and Kate.

Another phenomenon which has arisen out of Prince George's arrival has been that of mothers looking to Duchess Kate for parenting inspiration. In fact, as the first pictures of the Royal Baby emerged, sales of swaddling cloths soared as new mothers rushed out to buy wraps for their own children. But the old tradition has actually been much refuted by doctors, as it can lead to an increased risk of cot death and postural development problems, and the disparity between professionally recommended childcare practices and the pictures released of Kate holding her child left many women confused as to how they should proceed.

The Royal Influence: How the Birth of a Prince has Posed a Dilemma for Expectant Parents

With this in mind, there is an interesting challenge facing impressionable parents. Not only must they balance huge swathes of changeable information and the often contradictory opinions of medical professionals, but they are also encouraged to follow the example set by influential royal figures. The age of the Internet has only served to intensify this challenge, as expectant parents now have access to an increasing array of instantly accessible data. With this in mind, it can be difficult for new or inexperienced parents to execute strong decision making and forge their own individual identity as guardians.

It's no secret that the guidelines for childcare - particularly as it relates to newborns - has changed drastically over the years. In terms of breastfeeding alone, for example, the practice was in favour in the 18th century, fell out of favour again in the 19th, was regarded as an almost medical process in the early 20th century and began to be reclaimed by mothers again after the 1950s. More recent medical opinion recommends breast feeding for at least a three month period after the birth of your infant child, although this is not compulsory and each parent is encouraged to determine their own unique course.

In light of how the royal couple have handled the arrival of their own son, however, it can at least be said (swaddling cloth aside) that they make excellent role models for new parents. Reports indicate that Kate is breastfeeding and William is said to be hands on and suitably engaged. So although both the Duke and Duchess of Cambridge are said to be keen to not become â€˜pin-ups' for perfect parenting behaviour, their decisions are said to have influenced thousands of new mothers into eschewing the bottle in favour of feeing their children naturally. This is largely positive, especially as it reinforces the basic principles of good parenting and responsible guardianship.

The Bottom Line for Expectant Parents

While the royal couple may be reluctant to publicly embody these principles, however, expectant parents from around the world new mothers will surely be continuing to rejoice in the fact that the Duchess has chosen breast over bottle. With the breastfeeding movement continues to battle for space in the public arena, the influence of the Princess has served to underline the prevailing medical opinion and set a positive example for young and inexperienced mothers to follow.

M Arnesen is author at LeraBlog. The author's views are entirely their own and may not reflect the views and opinions of LeraBlog staff.