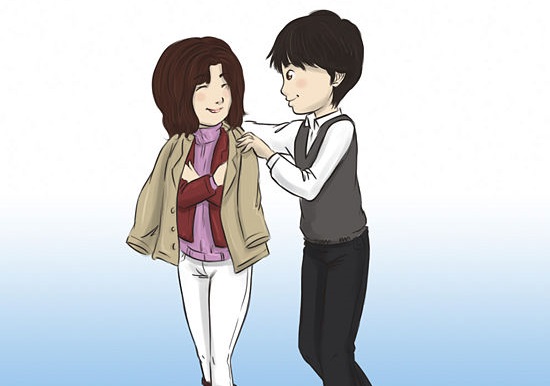 Woman may be a weird, illogical and incomprehensible creation for us but it's an undeniable truth that we, men, cannot imagine our lives without a woman. We adore them, admire them and care about them but we can't understand them. Though we cannot realize that we don't have to understand a woman but we just have to love her. So, how to make her happy? What does she need? These are some tips for caring men.

Nothing matters in such way for woman's happiness as being sure that she means love of all life for her man, that she is the one and unique for him. Of course, all women are jealous and don't brook other competitive women. As it's known, women love with their ears so if a man often tells his woman how much he loves her then she will feel the happiest woman in the entire world.

Man's tremulous relation to his sweetheart can make her happy because women - are very emotional and they need not only love confessions but also care and tenderness. That's why many women appreciate kisses, gentle touches and hugs. But, unfortunately, a lot of men are not used to express their emotions and kiss their women only when they want to get laid. But in the same time women are ready to kiss their man anywhere and anytime without exact reasons but not only during a love prelude. This aspect is very important for men who want to make their woman happy.

Women don't imagine love without romance that's why when romance leaves relationship it seems to weak half of a mankind that love has disappeared and only domestic things are left. How many scandals women make because of the fact that their men see in women only cooks, housemaids and nannies. But in fact, the reason is not in that they don't want to do house work but in that they have a lack of romance, mutual dinners with candles, evening walking and going to the cinema. This is a golden rule, the more romance in relationship the happier woman is.

A man has to not only love a woman but to respect her personality in order to make his woman happy. It means considering her interests, desires and hobbies, trusting her, not to offend and not to be jealous because of any meaningless details.

The more a woman loves her man the more she is afraid of losing him. The panic fear of losing relationship with her sweetheart doesn't only take her soul calm but also doesn't let her understand reality properly. Exactly under influence of this fear women become jealous, suspicious and nervous. So if a man really loves his woman, appreciates her soul calm and wants to make really happy then he has to do his best to make her be sure in stability and resistance of relationship.

A woman needs her man's compliments for increasing sureness of her own attractiveness and that she is the most beautiful and the most desirable for her man. If a woman doesn't receive compliments for a long time from her man then she begins to suspect that he has stopped liking her. That's why sincere compliment can make a woman happy because of two reasons. At first, it increases her self-esteem and secondly, it is a proof of his love. So a common men's opinion that compliments are necessary only on the first stage of relationship is wrong.

There is not such woman who would not like receiving gifts from her man. Even if a woman is a successful business lady who is able to buy the whole jewelry shop or a boutique of fashionable clothes she anyway dreams to receive gifts from her sweetheart the same as any other woman. The basic sense of the gift is not in its price or usability but in being a symbol of man's infinite love.