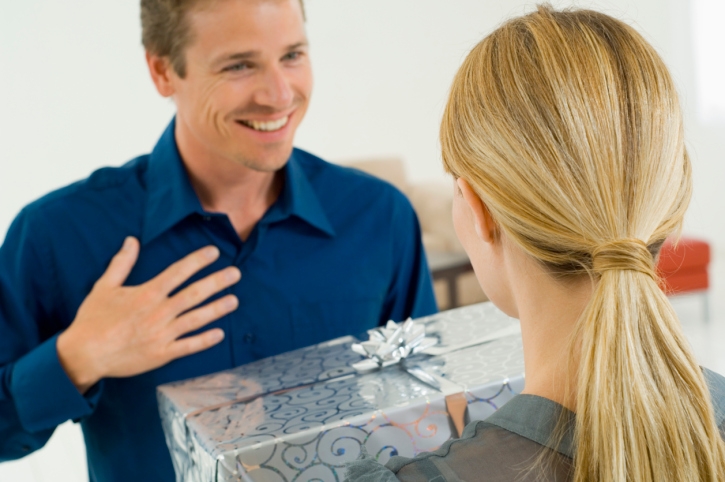 Do you often find yourself buying your own gifts because you weren't satisfied with the ones your friends gave you?

When you think about it, it actually makes perfect sense.

You know what you like. You know that you will be satisfied with what you buy for yourself. Why, then, are we unsatisfied when someone else gives us what we don't want?

Let's reverse it. What if you gave a gift to a friend, and she didn't like it? After taking extra time out of your day to find the gift, spend your hard-earned money, wrapping it and presenting it to your friend in the presence of others, her reaction is less than enthusiastic. She forces a smile. Or worse, she asks, "Oh. What is this?"

You're embarrassed now and secretly resentful. How selfish and ungrateful of her to not appreciate what you expected her to enjoy.

So what went wrong?

There's a big difference between what you think someone wants versus what they really want. The question is: Did you take the time to find out?

Who's This Gift For Anyway?

Be honest and ask yourself: Did you really buy this gift for your friend or for yourself? This happens more often than people think. I can't tell you the number of times I've received trinkets, clocks, free visits to places I had no interest in and shirts that didn't even fit me (but were exactly my friend's size). While I appreciated the intention and graciously accepted the gesture, I came to the conclusion that not much thought was put into what would have appealed to me.

Sounds rather selfish, doesn't it? Not really.

A gift should be given with the complete welfare and happiness of the recipient in mind. That requires effort. Her pleasure, not your own, should be your focus.

You might like dogs, and think, "Oh, my friend would love that! I'm going to get him one." Weeks later, he admits he sent it to an animal shelter because he couldn't afford to take care of it because he's having problems paying rent and taking care of himself, let alone a dog. Or, he loves pets, but he travels so much in his job, he simply doesn't want to spend the money on kenneling. Maybe he was never really a pet person, and you assumed he was. How did you miss that? Were you paying attention?

By the way, giving pets as a gift, is its own separate issue. Experts advise you to think twice, perhaps more than twice, before you consider doing such a thing. According to the RSPCA, more than 100 pets are abandoned every day in Britain. This is a problem all over the world, especially around the holidays. So if you're thinking about it, think again. Don't do your friend or the animal a disservice without thinking it through carefully and getting permission.

What Moves That Other Person?

If you want to give someone the perfect gift, find out what she really wants. Find out what she is about. What intrigues her. What moves her. Don't even factor in what you may like. It's irrelevant.

I once gave a gift to a girl who was a friend of a friend. So, I didn't know her as well as my friend did.

The time came for me to present her my gift. She opened the box, pulled away the wrapping, and her eyes lit up when she pulled out the item.

It was a shoe. Actually, it was a sculpture of a rugged, overly used tennis shoe with messy laces. Small. Matte. Not glossy. About the size of a baby's foot.

"Thank you!" she beamed. My friend and the others present raised their eyebrows in surprise, some in confusion.

What's so special about a ceramic shoe? To me — absolutely nothing. To her — it was the world. This girl ran 10 miles every morning in the cold because she loved it. She was training for a marathon she'd been dying to be a part of for years. This type of activity would never pique my interest. I don't see the point of breathing icicles from my lungs at 5 in the morning for 10 miles at a stretch when I'd rather be in bed.

To her, it was everything. It's what she craved. It was her purpose. To provide a gift acknowledging one of her deepest desires practically brought tears to her eyes. Go beyond the task of buying something for someone just to congratulate yourself. Instead, seek to give something to someone with real meaning.

That is the perfect gift.