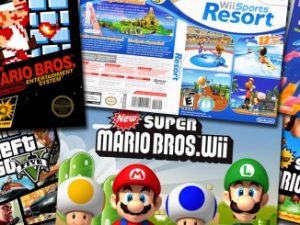 Video games represent different things to different people; a cherished moment in childhood to some, or an escape from reality to others, but to many people, they are a wonderful way to have fun and even learn more about how the world functions. They’ve been around for decades now and it’s likely that most people have had their fair share of experience with them. Considering how long they’ve existed, there are particular video games that have touched many people deeply enough that they’ve established their place as video games that one must have played if one is to consider him or herself a video game player. In the subsequent lines, the team at BettingTop10 made the top 5 of the most valued video games of all time.

1. Minecraft
A creation of the Swedish company Majong, Minecraft is a game that really challenges and brings out the creativity in you. It was introduced into our world in 2011 and has earned its place in society ever since. Minecraft has sold over 70 million copies since its introduction, which tells you that many people find the game considerably fun. It has 3D based graphics but its characters and environment look a bit abstract, so you’ll need some time to get used to the game. Once you get the hang of it, you’ll immediately realize how addictive the game can be, and the freedom it offers to craft almost anything your mind can concoct. Its initial platform was PCs but today you can have it on your Android, iOS, Xbox (360 or One), Windows Phone, and PS3 or PS4.

2. Tetris
It’s interesting that the most popular and top-selling games are not necessarily the ones with the best graphics or impeccable 3D rendering. Tetris is one of the simplest games you’ll ever play. All the game requires is for you to identify the different shapes of the blocks on the screen and then arrange them properly. It’s like arranging pegs in an IQ evaluation; identify the shape of the peg, and put it in the hole with the same shape. A lab monkey could do it, but it’s not that simple. Be that as it may, there has to be something about it that has made it sell over 100 million copies since its introduction into the gaming world. It’s a fun game with very simple graphics. Owing to its age in the gaming world, you can find Tetris on almost any device with a screen. Whether you have a Game Boy, a Symbian Cell Phone, Android, Amiga, Commodore VIC-20 / 64, Amstrad PC, PC, SNES, NES, or an iOS, you’ll still be able to comfortably enjoy this wonderful game

3. Wii Sports
Nintendo figured that the time for just being a couch potato was over, so they developed a game that required the movement of more body parts than your thumbs. Wii Sports is a game that was created essentially for this purpose. It has a number of games that will require your participation in various ways depending on the nature of the game. It has motion controllers that sense the movement of your arms or body and reflect the same motion on the screen. It has games like golf, bowling, baseball, and tennis. For instance, to play tennis, you’ll have to make the same motion you would if you were actually playing tennis, and then the controllers will reflect the same motion on the screen making your player do exactly as you do – amazing, isn’t it? This concept was so impressive that Nintendo has sold over 83 million copies of this game. Unlike the earlier two games, Wii Sports has more realistic graphics. It’s exclusively a Nintendo product; therefore, only playable on Nintendo.

4. Super Mario Bros
Another very popular game with simple graphics, Super Mario Bros has sold over 40 million copies since we knew it. It’s a game that every gamer has played, and is one of those games that would fall under the category of people who consider gaming a beautiful childhood memory. It’s another Nintendo masterpiece and it’s a very addictive game with catchy theme songs and tunes. Prior to the introduction of Wii Sports, Super Mario Bros was Nintendo’s top selling game. It’s been around since 1985 and due to its age in the gaming industry, you can enjoy this game from assorted devices like Android, iOS, PC, Play Stations, and even a Symbian Cell Phone. In fact, Super Mario Bros and Tetris are two games that go hand in hand, not because they are similar but due to the fact that they were popular at the same period in history.

5. Grand Theft Auto (GTA)
With more than 80 million copies sold, GTA is perhaps one of the most interesting games you’ll ever play. The main concept behind the game is the freedom to do essentially whatever you want while living the street life, albeit there are missions which you can choose to follow. This game franchise has come a long way from GTA 1 with simple graphics but very interesting game play, to the very life-like 3D graphics of GTA V. Many people, are attracted to the fact that the game gives you a glimpse of how life is like as a gangster. There is something very captivating about the concept of freedom and being able to do whatever you want, and this is what GTA is all about. You can explore different states, steal vehicles, and mess around with people as you please. Even though there are rules and the police will come after you if you break enough of them, if you know how to evade the police and the keys for the different hidden cheats, you’ll essentially be the king of your virtual world.

There are other games that could possibly demand a place on the list, but these are the ones that have gained international acclaim and recognition that they sold the most copies. For more details, you may check this Wikipedia page.