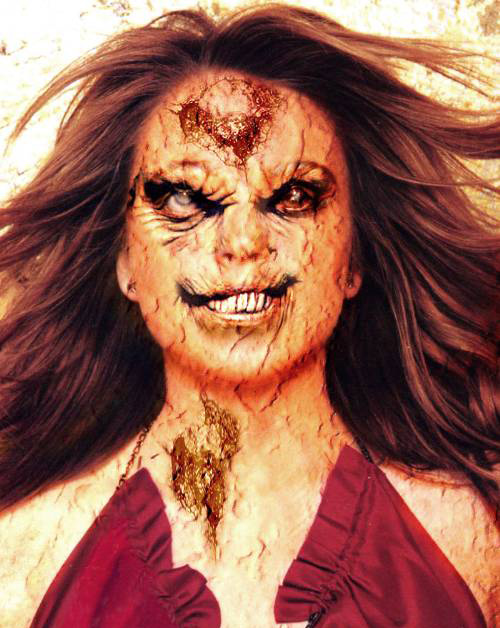 From the earliest days of moviemaking, cinematic makeup has served an integral role in audiences’ ability to effectively suspend disbelief. Ranging from the simple lipstick and rouge that serves to make a face more camera-friendly to the full-fledged physical transformation, makeup is one of the most important elements in a film’s believability to an audience. Throughout the history of movies, there have been remarkable achievements in makeup that have garnered considerable acclaim for their outstanding believability.

One of the earliest instances of masterful cinematic makeup is evident in the film work of Lon Chaney. Dubbed “The Man of A Thousand Faces”, Chaney was known for his complete physical transformations in such films as The Hunchback of Notre Dame (1923) and The Phantom of the Opera (1925). One of the most frightening scenes in all of movie history is said to be in The Phantom of the Opera, wherein the Phantom’s mask is pulled off to reveal a horribly disfigured face, bulging eyes, and rotting teeth. Audiences were so startled by the vision of the Phantom’s horrifying face that many audience members screamed and fainted at the sight, as they often did at Chaney’s frightening physical transformations. This is a testament to the power of makeup to invoke intense emotions and extreme reactions.

Significant lack of makeup can also make an indelible mark on an audience’s perception of a character. In 1954, the elegant and stylish Grace Kelly delved into a project entitled The Country Girl, in which she would play Georgie Elgin, the dowdy housewife to an alcoholic husband. The role required that she wear essentially no makeup, a great deviation from her previous roles of glamorous socialites and beautiful fashion models. The removal of makeup leaves an actor with no support but raw talent, and critics doubted Kelly’s ability to effectively portray Georgie as so much of her previous success had hinged upon her icy beauty. By taking off her makeup, Grace Kelly received rapturous critical acclaim upon the release of the film. Overnight, she had transformed the audiences’ perceptions of her from empty beauty queen to serious dramatic actress. Her performance earned her the Academy Award for Best Actress of 1954, and it is likely that her win was due to the fact that she dared remove her makeup.

Indeed, it is said that makeup affects an actor’s performance and that many acting Oscar wins are credited to makeup alone. When Nicole Kidman put on a false nose for her role as Virginia Woolf in The Hours (2002), her facial features were completely altered and she was essentially unrecognizable. For a personality as familiar as Nicole Kidman, this proved to be a major feat in makeup. Whether or not her performance was enhanced by the use of a prosthetic nose, or whether it was the audience’s perception of her that was enhanced, it is difficult to know, but Kidman won the Oscar for Best Actress that year. In more recent days, the transformation of Anne Hathaway into the sickly prostitute Fantine in Les Miserables is said to have greatly influenced her win for Best Supporting Actress at this year’s Academy Awards.

The influence of makeup on film is something that reaches much farther than official accolades afforded to it, and the transformations that occur due to masterful makeup have a profound effect on audiences and performers alike. The best artistic performances on film are often achieved through the application (or lack of application) of makeup, and physical transformation of a character leads the audience to the disbelief that is necessary for the believability of a film.

Ashley Jensen is an entertainment blogger, currently residing in the great state of Texas. She has found that many Texas industries, ranging from movie, television, theatrical productions, as well as photography and personal styling, have all found excellent Makeup Artist Houston services with PB Talent.