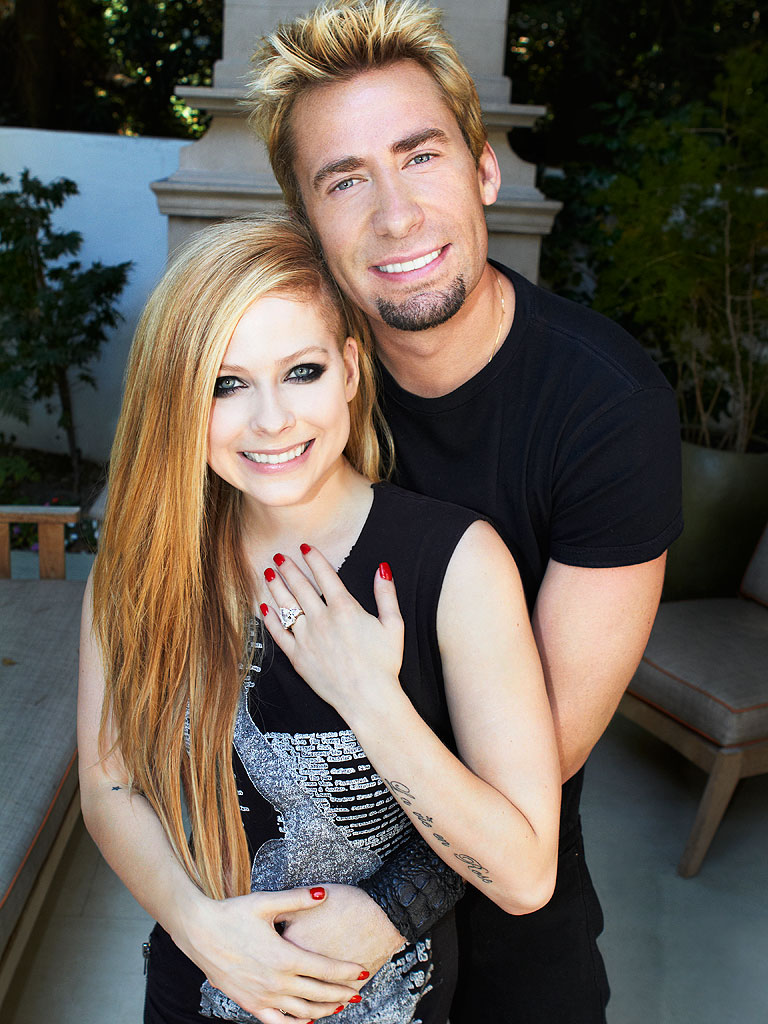 Lavigne, 28, admitted she wanted the wedding "over the top" and, true to form, went for a gothic theme, complete with a black bridal gown.

"I’m obsessed with castles and I love French decor and goth. I found this castle and it was perfect," she told the magazine in an exclusive interview.

She was referring to the medieval Chateau de la Napoule near Cannes, France, where the couple flew in 100-plus guests from their native Canada.

“I also wanted to make sure it was a crazy vacation and an experience of a lifetime for our guests,” Lavigne said.

She walked the aisle in a sable Monique Lhuillier gown with a sweetheart neckline and a lace-y black veil hanging from a jewel-encrusted headdress. A bouquet of black roses finished the look.

“Before I walked down the aisle, I had to take a few breaths because my heart was pounding. It was so intense," she recounted to Hello!.

“I had goosebumps from head to toe and my eyes filled with tears. It’s a moment I will never forget as long as I live.”

She added that her body was "overtaken by emotion” while seeing his groom looking "so calm and happy."

“He had a tear coming down and he wiped it away. I felt so good walking to him. It made me feel like a complete woman," she added.

Kroeger, 38, asked for Lavigne's hand only a month after officially dating. The two met in February last year while Lavigne was recording her fifth LP, due to stores this September.

Kroeger gushed to the magazine: “It felt like the stars had aligned. It felt like fate was intervening and I was being given this wake-up call, ‘Don’t let this one get away.’

“And I think she felt the same way and that’s why I proposed in such a short time span, because we wanted to start our lives together.”

Kroeger is only Lavigne's second husband though. She was last married to Sum 41 frontman Deryck Whibley, with whom she claims to be on good terms.

“Deryck and I are really good friends. We were just really young and we were together for six or seven years," she said.

"But with Chad I was single for the first time and I was like ‘woo-hoo’ ready to party. Then-bam-it just happened.”

Kroeger and Lavigne were spotted Jul. 8 frolicking in Portofino, Italy for their honeymoon.

How to throw a goth-themed wedding

With the right attitude, you can pull off your own alterna-wedding like Mr. and Mrs. Kroeger.

1. Have the courage to wear black.

Chad and Avril wore colour-coordinated outfits to their big day. But while all-black grooms are everyday stuff, the mourning-lady look on brides is still a relative rarity.

Thanks to Ms. Lavigne nonetheless, you no longer have the burden of being the first. In fact, Vera Wang has been selling black wedding gowns since last year. Check out any of the major bridal store chains today in the US and you'll see that black dresses have truly entered the mainstream.

In true rocker style, Mr. and Mrs. Kroeger penned and recorded a song for their wedding. It will reportedly see the light of day as a single.

If only our musical IQs were as high as these two, then we would not have a sordid time selecting, let alone making, our wedding songs. So how do you pick the right songs for wedding day, apart from "I'm With You" or "How You Remind Me"?

Get someone to DJ the event. Sure, have the last say on what kind of tunes must play, especially those that reflect your relationship, but ultimately strike a consensus with the DJ. He or she would know what would make the people dance, while sticking to your favouritesâ€”even if they include really weird stuff.

3. Make mix CDs for each other.

You might not have the songwriting genius of Avril Lavigne-Kroeger, hey, hey, you, you, but at least you are capable of making a mix disc. Assemble those songs that make the soundtrack of your love life. If anything, the CDs will make for great wedding souvenirs.