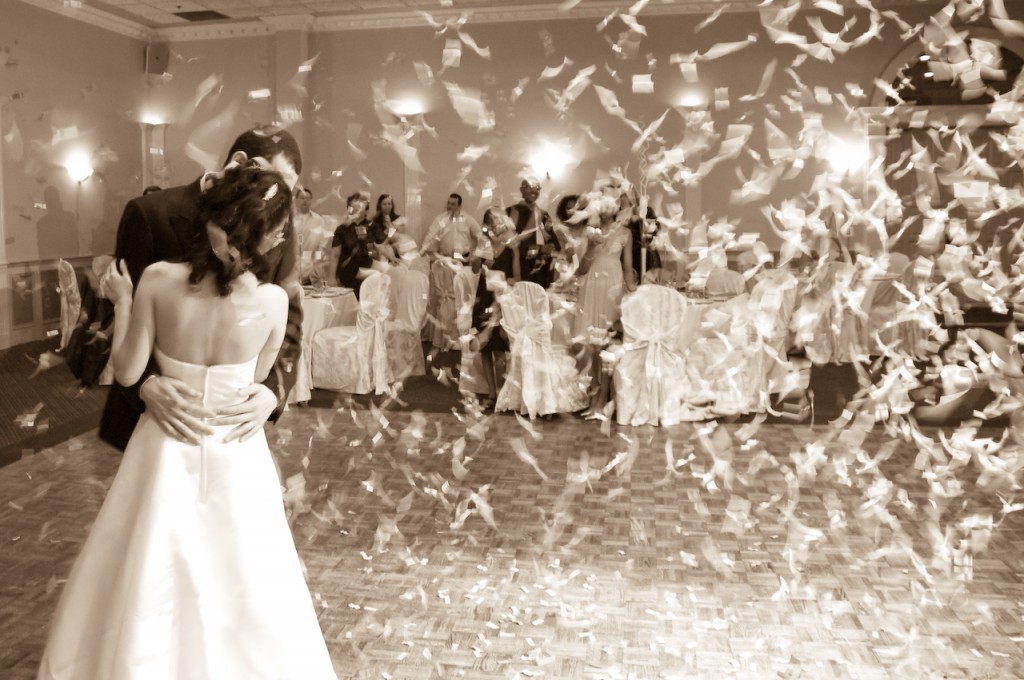 While the legal battle over who can and cannot get married rages on in the U.S., in other parts of the world some seriously strange practices are being carried out when it comes to courtship and weddings. Some of the rituals that other cultures do regarding wedding ceremonies are downright dangerous, and would certainly be illegal if we tried them here in the U.S.

The presentation of these practices should not be seen as representative of an entire group, nation, or culture.

2) Blackening of the Bride

Sounds pretty gruesome, right? In Scotland, some people take part in the tradition of "blackening" a bride, (although sometimes the groom gets it too). It basically consists of throwing lots of gross things onto the bride-to-be. The "blackening" content consists of everything from curdled milk, rotten food, dirt, mud, or even molasses. Essentially by the end of the ordeal, the bride is so completely covered in filth, she is "blackened."

The point of the blackening ritual is to mentally prepare young brides and grooms for the challenges of married life. So, in other words, marriage is the equal to being publicly humiliated and covered in gross goo? Sounds so appealing!

Some sects of the Romani are thought to have a charming tradition called "bride kidnapping." It's essentially exactly what it sounds like. In order to avoid the much more ethical practice of buying your bride, Romani men thought it would be easier, (and cheaper) to just kidnap them instead. If a man manages to successfully kidnap a Romani girl and keep her by his side for 2-3 days without letting her escape, she officially becomes his wife.

If you think that the practice of bride kidnapping is probably limited to a few isolated incidents each year, you're in for a rude awakening. According to the Kyz Korgon Institute, a nongovernmental organization that campaigns to drop the tradition of bride kidnapping in Kyrgyzstan, it happens more than you think. A spokesperson recently said, "Our researches show that between 68 and 75 percent of marriages in Kyrgyzstan take place with bride kidnapping.” In our modern civilization, the fact that "bride kidnapping" still takes place negates any claims of "social progress" we could ever hope to make ourselves.

4) Being Forced to Get Fat

While most brides are starving themselves to lose weight before the big day, in the country of Mauritania, it is quite the opposite. Mauritanian culture operates according to a "bigger is better" mantra. Future brides as young as 5, are sent to "fat camps" where they're often force-fed, and under constant pressure to pack on the pounds. While being overweight is certainly not a crime, being forced to eat yourself into an early grave most definitely should be. If the girls don't gain enough weight and become obese, they will not be able to find a husband when they are of the age to marry.

In Greece, a bride must chose a young, prepubescent boy and nibble biscuits off his neck before she gets married. Hmm in some places, this could be considered wildly inappropriate. In Greece, it's just tradition!

While weddings will always be a practice steeped in tradition and cultural significance, sometimes we have to stop using the cultural relativity argument and start saying, "Hey! Kidnapping women so you can force them to marry you is WRONG."

Published on behalf of Jessica Ruane who had a ton of fun researching this article. Says Jessica, “Anyone who doesn’t check for prior criminal or marriage records on a potential mate is opening themselves up to unwelcome surprises after the wedding.” Go to Twitter to find out more about what Jessica knows.