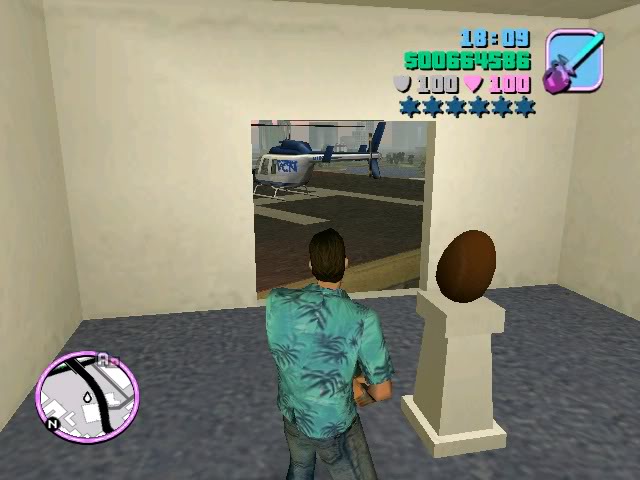 While you are consumed in the action-packed gameplay, you are sure to run by a couple of Easter eggs in Vice City that you may even notice were there. An Easter egg being a hidden object, room, message, or inside joke inserted in the game by the developers for the player's amusement. Below are a number of Easter eggs you will find when playing Grand Theft Auto: Vice City.

The first, and probably the most popular, is the Scarface bathroom. If you go into the open apartment in the pale pink house in downtown Ocean Beach, and enter the bathroom, you will see a reference from the movie, Scarface. There is a chainsaw pick-up floating in the middle of the room. To the right of that is a bathtub and a wall with blood and bloody handprints smeared all over it. This is Apartment 3c, and is located south of the pay n' spray in this area, and has the Sparrow helicopter parked on top of the roof.

Another Easter egg that strongly references the common practices of the mafia appears in an area of the ocean around Vice City. Next to the Leaf Links golf course, beside a group of rocks, if you get a boat and look into the water (using the sniper rifle with a scope would help), you can see a man in his boxers at the bottom, "sleeping with the fishes." As is well-known, this was a typical way for the mafia to "whack" someone, by encasing their feet in concrete, and throwing them into the ocean.

There is literal Easter egg room in the VCN building in Downtown Vice City. All you have to do is enter the open door of the building, then go up the ramp to the helipad, and jump through the window to the right of the corner of the helipad (it is not a solid window). Here, in the middle of an empty room, you should find "Happy Easter" written on a brown egg, perched atop a pillar.

There are also quite a few Easter eggs in the game that are of a more X-rated nature. If you look at the front of the Chariot Hotel (located in front of the Malibu Club) between 11 and 11:55pm, you will see lights arranged in the shape of an erect penis on the building. A fountain also spurts water intermittently, resembling ejaculation. You may need a helicopter to see the complete show. This is one of the more amusing Easter eggs found in GTA Vice City.

Conspiracy theorists will enjoy the following Easter egg. On Prawn Island, there is a movie studio that features a set appearing to be a replica of the film of the live moon-landing in the late 60s. Clearly, the developers wanted to joke with us about the notion that the moon landing was faked. Hmmmâ€¦.

Horror fans will enjoy the Easter eggs by the Funeraria Romero funeral home. Through the display window, under the sign for the funeral home, you can see three tombstones, one of which reads Steve Mulholland R.I.P., who is a developer on Vice City. A vandalized photo of Bela Lugosi as Dracula hangs to the right in the display window. A skeleton without an arm can be seen in an open grave around the funeral home. This is comical because a butcher shop is located beside the funeral home, and this begs the question of what the missing arm was used forâ€¦ Just a creepy egg for those more into the macabre.

Lastly, you should get a look at one Easter egg that proudly displays the logo of the company that created Vice City in a pretty cool way. The Rockstar Games logo can be seen as in the form of an R-shaped pool on Starfish Island. If you go around back of to the white house that is on the main road that you exit the bridge from (it is sort of a Spanish-style house, not Diaz's mansion), you will find the pool.

There are seven cool Easter eggs that you can find in the game. There are many more, however, not necessarily as fun. Go for a look next time you play the game and you are roaming around between missions. The entire game is an Easter egg in the way that it pays homage to early mafia/gangster films, as well as the fact that it features Goodfellas star Ray Liotta as the voice of protagonist Tommy Vercetti.