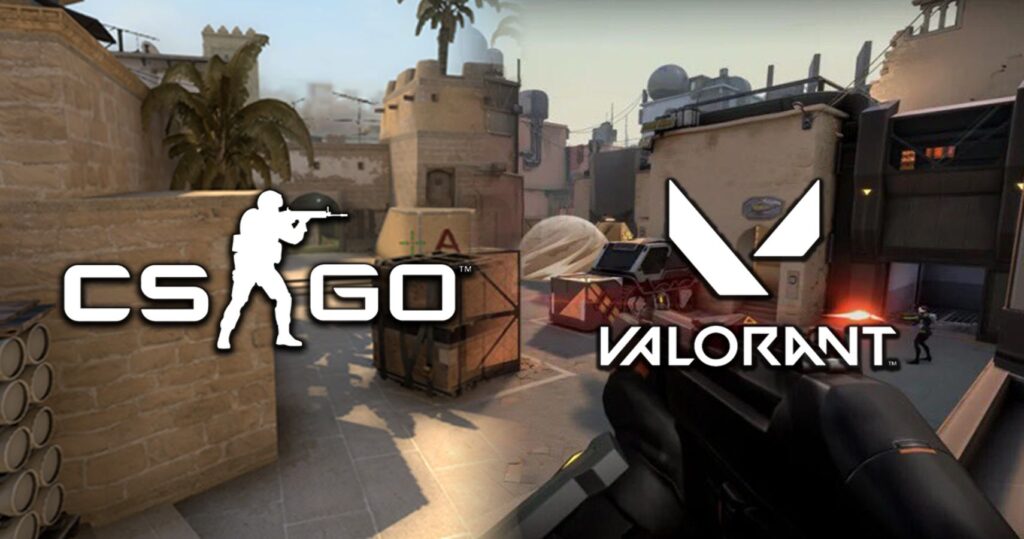 The internet will never be satisfied unless they’re comparing things. From comparing games to comparing consoles, it’s almost become a pastime at this point. In this case, we’re looking at two different first-person shooters: CS:GO and Valorant. CS:GO is the older of the two titles releasing in 2012 while Valorant was recently released in 2020

CS:GO influences Valorant with its team-based combat revolving around the objective of bomb-planting. The character-focused art style of Valorant compared to CS: GO’s generic operator most likely influences Blizzard’s Overwatch. If you’re deciding which game to play, you have to look at each game’s pros and cons.

CS:GO, also known as Counter-Strike: Global Offense, was developed by Valve and Hidden Path Entertainment to be the fourth installment in the Counter-Strike series in 2012. In typical Counter-Strike fashion, the game revolves around two teams, terrorists and counter-terrorists, fighting over objectives.

CS:GO has different game modes from competitive to casual. The basic idea behind CS:GO is for the terrorists to set a bomb or defend captured hostages while the counter-terrorist tries to defuse the bomb (or keep it from being planted first). Counter-terrorists can also try to rescue the hostages. Unfortunately, the game is starting to show its age a bit as it tries to compete with newer titles such as Overwatch or Valorant. With more modern titles to play, sometimes playing CS:GO can feel a little repetitive. It doesn’t help that CS:GO has one of the most toxic communities of any current multiplayer title.

TIP: In both games, you can order boosting services. The most common is faceit elo boost that you can order on websites like imbaboost.com. Boosting is very popular in cs:go the question is how it will grow in a new community of Valorant.

Valorant is another tactical first-person shooter, similar to CS:GO, and is also free-to-play. Valorant was both developed and published by Riot Games. However, unlike CS:GO, it is only available for Microsoft Windows. Players, otherwise known as “agents” in Valorant, are placed in a team of five and set to attack or defend. Much like Overwatch, each Agent has a unique ability they can use during gameplay. Their special ability is charged by killing, dying, or performing an action on the spike.

Valorant has submachine guns, shotguns, sniper rifles, assault rifles, machine guns, and smaller sidearms. On top of that, the player also needs to worry about controlling recoil with automatic weapons. In the primary game mode, the match goes until a team wins 13 rounds or best of 25. The team set to attack has to place a bomb called a “spike.” Once a spike is placed, the attacking team must then defend it until it detonates. The other team, otherwise known as the defending team, must attack and deactivate the spike to win the round. However, rounds can also be won by eliminating all opposing team members before the spike is activated. Riot is doing what it can to get this 5-v-5 competitive shooter into the e-sports scene as quickly as possible with its Ignition Series.

The Similarities Between CS:GO And Valorant

Gamers are trying their best to crown every new team-based shooter as the “CS:GO-killer,” but the only thing that will kill CS:GO is itself for not modernizing. They’re going to exist simultaneously, for now.

One of the similarities between CS:GO and Valorant is the objective for the teams. The goal for both is to plant and destroy bombs or eliminating the opposing team before the bomb is placed. Since they’re both team-based shooters, communication between team members is imperative. Knowing who is where on the enemy team can mean the difference between a win and a loss. Unlike Overwatch, a team-based game where you don’t have to worry about your movement when running-and-gunning, both CS:GO and Valorant have similar gunplay. That means you can’t just run-and-gun as you can with Overwatch. If you want better aim accuracy, you have to stop and aim.

The Differences Between CS:GO And Valorant

Valorant may seem like a cartoony version of CS:GO, but there are some differences. The maps in Valorant might look similar to CS:GO, but Riot tried to add some uniqueness to it with teleporters, collapsible doors, and other unique map elements that CS:GO doesn’t have. Character movement with a knife is also faster than CS:GO. While the knife movement is more rapid in Valorant, the strategy of bunny-hopping isn’t as effective as it is in CS:GO.

If you’re not a relatively good first-person shooter player, then CS:GO might have too high a skill ceiling. Valorant seems to be more newbie-friendly despite only being available for the PC. While both CS:GO and Valorant have pros and cons, they’re both games you should try for yourself and formulate your own opinions. Who knows, despite CS:GO being the older game, you might enjoy it over Valorant’s modern take on team-based tactical shooters.