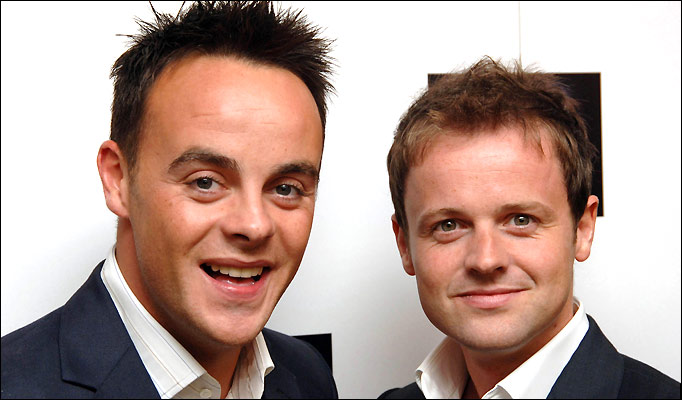 In the annals of British entertainment, there have been many great comedy and variety acts, but the greatest of all was undoubtedly Morecombe and Wise. They were a brilliant comedy duo and, in their heyday in the 1970s, cemented a permanent place in the hearts of the British public. After Eric Morecombe died of a heart attack in 1984 television was never quite the same again, but the vacuum now seems to have been filled; zany comedy pair Ant and Dec are taking over where the great Eric and Ernie left off.

Ant and Dec (Anthony McPartlin and Declan Donnelly) got their start in the entertainment business when they were 13 years old with roles in the popular BBC teenage drama Byker Grove. On the set they formed a firm friendship and began working together as a singing duo, which led to several hit songs including Let's Get Ready to Rhumble and Shout. At the same time, they worked in children's television and had their own show Ant and Dec, which won BAFTA awards for â€˜Best Children's Show' and â€˜Best Comedy Sketch Show", setting the stage for greater things to come.

In 1998, the pair formed their own production company and launched SM:TV Live and CD:UK, a Saturday morning comedy and music show rated by many critics as one of the best shows ever to air in that time slot. By December 2000, they had signed an exclusive contract with ITV, going on to host several shows while still presenting SM:TV Live and UK:TV.

With the new millennium, Ant and Dec went from strength to strength and in 2002 launched a brand new Saturday night prime time series Ant & Dec's Saturday Night Takeaway, a multi-award winning comedy, game and variety show that lasted for nine seasons and is scheduled to return to TV screens in 2103.

But it seems that everything the boys touch turns to gold. Their 2002 offering I'm a Celebrityâ€¦Get Me Out of Here was hugely successful and ran for eleven series and their first feature film Alien Autopsy, first screened in 2006, was a box office hit and topped the DVD/video charts in its first week. A year later, in 2007, Ant and Dec had yet another hit on their hands with the launch of their Britain's Got Talent show.

It seems that where there is a successful television show, Ant and Dec are somewhere close by. The list of their credits goes on and on and continues to grow. With all the awards and accolades they have received, we can only guess at the size of the mantelpiece they need to show off all the trophies - including Most Popular Entertainment presenters (11 consecutive years), six British comedy awards and a BAFTA.

It's no mean feat living up to the legacy of legends like Morecambe and Wise, but Ant and Dec look set to be the ones to continue the tradition of great British comedy and variety duos. In fact, they are already creating a legacy of their own and well deserve to be placed up there with the best.