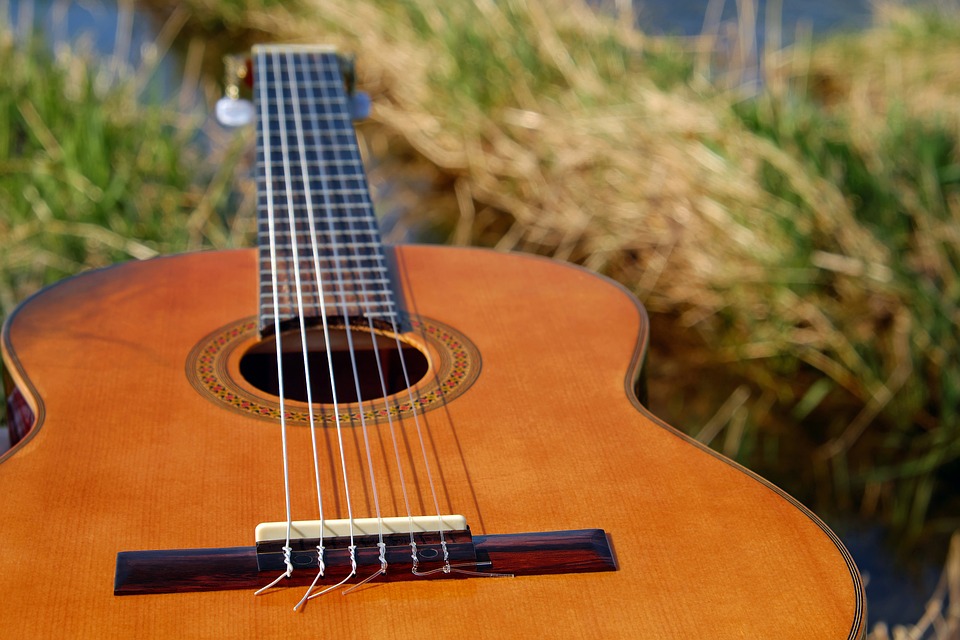 The inability of the non-magnetic materials to provide sufficient vibrations has made it essential for these guitars to feature the microphones and transducers for effective sound quality. The presence of the piezos saddled transducers for amplification required preamplifiers to be incorporated into the design. In addition to this the acoustic electric guitars, can borrow other electronic elements from an electric guitar such as a piezo transducer and dual source systems. This allows different sound effects and volume options in these guitars.

Its tonal quality is similar to an acoustic guitar owing to its laminate or solid top. Whereas the basic tone producing laminate top guitars feature wooden pieces joined together, solid top acoustic electric guitars are designed by joining two well matched pieces of wood which account for its beautiful sound quality.

The earliest acoustic electric guitars Gibson J-160E were manufactured to include magnetic pickup in the standard acoustic guitars. These pickups located in the guitar’s neck joints or sound holes allowed for greater sound amplification. However with this came a far larger problem and that was the constant feedback. The overtones produced by acoustic guitars were of a greater frequency than the standard magnetic pickups could handle.

The revolutionary change in these guitars was brought about by a company known as Ovation who wanted to design guitars for Gen Campbell. They designed the first piezoelectric bridge pickup in the 1960s which replaced the conventional microphones in the design. This restrained the problem of feedback as the guitar top and body vibrations were now amplified by the piezos, thus producing a clearer tone. With time other companies have utilized this technique and made innovations to produce their own line of acoustic electric guitars.

These guitars have been used by famous musicians and singers including Tim Hughes and Chris Tomlin. A number of popular guitar manufactures including Fender, Yamaha, Takamine, Taylor and others have their own line of acoustic electric guitars in their collection. They are either archtop or flat top guitars and have six nylon or steel strings. A recent addition to the innovative technology used for modeling these guitars, Variax produced by a company known as Line 6 allow amazing acoustic overtones to be produced. Moreover the amplification makes it loud enough to be heard in the din of the concert halls. The innovative plug in acoustic electric guitars allows the guitars to be connected to the consoles or speakers without the need for mics. The versatility of its design along with the quality of its sound makes the acoustic electric guitars quite popular among all musicians from the folk to the country, blues and jazz musicians. Here you can find some reviews.

A Brief History of Electric Guitar

Before the 1930s the acoustic guitars had reigned the musical stage. However with the enhancements in the electrical amplification by the radio industry, the stage was all set for the introduction of the first electric guitars in the 1930s by Adolph Rickenbacker and George Beauchamp. Together with their partner Paul Barth they founded the Electro String Company in the year 1932 that manufactured the first line of electric guitars that was made available in the market.

Known as the frying pans because of their strange design which allowed them to be played on the lap along with the use of aluminum material, these electric guitars were quite successful. Moreover it inspired the design for the popular Gibson ES-150 that was designed by Walt Fuller and marketed by the Gibson Company.

These initial electric guitars used electromagnets to induce the vibrations from the strings, thus using a direct pickup. This was significantly different electric pickup developed by Llyod Loar, an employee of the Gibson manufacturers in 1924. A predecessor to the frying pan guitars, the design made by Loar allowed he vibrations induced by the strings to reach the magnet and coil using a bridge. This in turn recorded and passed on the signals to the amplifier.

Although the guitars developed by the Electro String Company along with the ES-150 were legendary in their own respect, these hollow bodied guitars had some major design flaws. Its design allowed the vibrations to be amplified and there were persistent problems with feedback and indistinct tones. The solution came from none other than the great designer Les Paul. He believed that the solution to these flaws in the hollow bodied guitars could be remedied with the introduction of solid body in the electric guitar design. Developed in the 1940s, Les Paul called these solid bodied guitars as “The Logs”. Featuring a 4×4 piece of solid pine wood along with dual magnetic pickups, these guitars eliminated the distortions and feedback of the earlier electric guitars.

With Gibson being reluctant to use the solid body design, it was Leo Fender from Fender Broadcaster who took up this design readily creating the Telecaster in 1949 which went on to become the world’s first solid body electric guitar. This was followed by with another successful model known as the Stratocaster which quickly became the rage with rock and roll musicians and country singers. It was made popular by Jimi Hendrix who took a fascination to this solid body design and amazing acoustics of the model. As the success of the solid bodied guitars mounted, Gibson too wanted to build its own line of solid bodied guitars. They teamed up with the original designer Les Paul to create the Les Paul collection that is popular even today.

The popular heavily priced electric guitar has now made ways to cheaper imitations models of guitar instruments. This induced the Gibson and Fender companies too to produce cheaper top of the line models and other futuristic designs. With passing time, competition has increased leading to better designs and superior innovations.

backbenchers is author at LeraBlog. The author's views are entirely their own and may not reflect the views and opinions of LeraBlog staff.