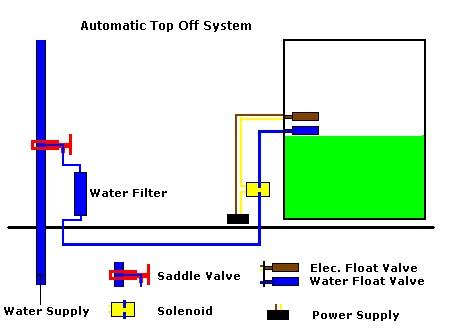 Whether you have a small fresh water aquarium or a room-sized reef aquarium, the key to keeping your livestock happy is stability in their environment. By using an automatic top off system (ATO), you can ensure that the environment in your setup remains in good condition, even if you do not check your aquarium for a week.

What Is an Automatic Top Off System?

An ATO system is a device that regularly pumps fresh water from a separate reservoir into your aquarium. With an ATO system, you accomplish two important items. First, you no longer have to watch the levels of your aquarium and haul heavy buckets of water to replace liquid lost through natural evaporation. Instead, the ATO system is programmed to turn on and pump new water into the aquarium automatically, whenever water levels reach a lower limit chosen by you.

The second advantage you receive from operating with an ATO system is stability in the environment of your aquarium, especially if it is a salt water aquarium. In an aquarium system lacking an ATO system, as water evaporates, the salinity of the water increases. This can place great stress upon your livestock, because water salinity determines how much osmotic pressure is available for the respiration of your fish, corals, and plants. The ATO system replaces the evaporated water with fresh water, maintaining the salinity level that is proper for your setup.

Features to Look for in an Automatic Top Off System

When choosing the right ATO system for you, there are a few features to consider. First, you want a system that has some redundancy built into it, so that it can still work even if some part of the system fails. Second, the better quality systems bypass the normal float switch that can fail mechanically. Instead, look for a system that is triggered by sensors instead of moving parts. The third item to look for in a good ATO system is an automatic timer that runs at regular intervals for minor top offs.

Some Examples of Good Automatic Top Off Systems

From the inventor of the ATO system comes the TunzeOsmolator Universal Water Level Regulator 3155. This easy-to-install system uses an optic eye to measure water levels precisely, and can even sense the motion of waves as fish swim by. As part of its security system, this unit also has a safety float that stops the water flow and sounds an alarm if the optic eye malfunctions. Better yet, if both the optic eye and the safety float fail, the circuitry of the entire ATO system shuts down after 10 minutes.

In the category of incredibly small but highly effective, count on the AutoAqua Smart ATO-Automatic Top Off System for Aquariums. This ATO makes a golf ball look big, which makes it fairly unnoticeable when attached to the side of your aquarium or sump. This unit can read through as much as Â½ inch of glass or acrylic. With no moving parts, the AutoAqua Smart has no reason to fail. Best yet is the ease of use. Simply move the outside controller to the level you want your aquarium water to be, and walk away. This unit does the rest.

Deange Colbn is author at LeraBlog. The author's views are entirely their own and may not reflect the views and opinions of LeraBlog staff.