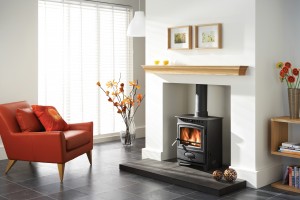 Creosote, as you know, is formed when wood smoke condenses, getting stuck in the chimney before it moves out through the top of the pipe. If your chimney is lined with creosote, you are in great danger.

You need to minimise creosote build up as much as possible; if the chimney is not cleaned on time, the creosote gets thickened on the flue, making your chimney significantly less efficient. The creosote build-up needs to be removed since they are extremely inflammable and in case they are left unchecked, you risk a chimney fire.

In case a chimney fire takes place, the creosote burns as well as extinguishes. It cracks the flue tiles making you spend thousands repairing it. In the worst scenario, the chimney fire spreads, turning into a home fire.

Creosote build up is an inevitable part of wood burning fireplace and taking steps to prevent its formation is crucial to ensuring safety. Let us take a look at the steps you can take to minimise creosote build up.

Creosote build up in the flue is heightened with increased moisture content in the firewood. In most of the cases, green wet wood is the reason behind creosote concentration in the chimney flue. Green wet wood produces more soot as compared to seasoned firewood.

You need to open the damper to bring down creosote formation. This is a very small chore but most people tend to forget this.

Open the damper well before you begin the fire. In case the damper is open but there is still smoke, you can open the windows. Keep it open for a few minutes and then you can close it. A bit of fresh air will aid in moving the smoke up the chimney.

Don't close the damper till the fire is completely out.

Avoid Burning Trash in the Fireplace

If you are burning trash in the fireplace, you are dirtying your chimney and sending large embers up the chimney flue. This can create a dangerous situation.

In case your chimney is already lined up with creosote build up, the flying embers can lead the creosote to be on fire. The large embers can also cause a house fire.

Restricted air flow is yet another reason behind creosote formation in the chimney. Air supply is cut down if you keep the glass doors closed, do not open the damper enough, or if there is not enough air to help the smoke move up rapidly and escape the chimney. The longer the smoke is inside the chimney, higher are chances of soot formation.

Build the hot fires instead of the slow burning ones since they produce more smoke.

The way you arrange the logs of wood has a role to play. Make sure to keep some gap so that the air flow is not restricted.

Fire that tends to die out is an indication that it is not hot enough. If the fire is not enough, you also run the risk of dirtying the chimney that is yet another cause of chimney fires.

Keeping cool and smouldering small fires using wet wood is the best formula to cause creosote build-up. Avoid that at all cost.

Make sure that you undertake an annual chimney inspection and cleaning session. Though you can always handle the task yourself by purchasing the requisite equipment, always remember that this is an extremely dirty as well as a time-consuming job. You may fail to clean the chimney thoroughly as well. Thus, it is always a better idea to get the aid of a professional. You will certainly be glad that you did that. This will save your as well as your near and dear ones' life.