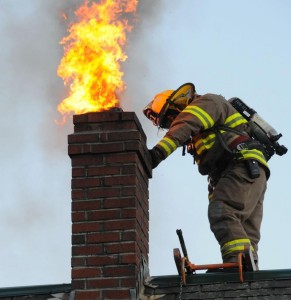 Every winter you like to light up the fire in the fireplace of your home. And it gives you a perfectly cosy ambiance. Just the one you can die for. But at times, these fires can cause a bit of a problem as well. There might be different types of issues, which can happen. And a major one among them is surely the chimney fire. It can result in severe accidents as well.

A lot of chimney fires occur every year across the United Kingdom. And many of them lead to more dangerous accidents as well. It is always a good idea to remain abreast about the details of chimney fire, so that you can fight it when necessary.

Why Do Chimney Fires Occur?

When you burn some wood in your fireplace during the winter, it gives out smoke, water vapour, tar, gas and others. All these are meant to escape through the chimney. However, the chimney is cooler than the fireplace. So, it is observed that many of these components tend to settle on the walls of the chimney. They result in creosote build-up, which is one of the major perils of having a fireplace in your house. The creosote that gets collected on the chimney walls grows thick with time. These components are highly inflammable. So, there is always a chance that they are going to catch fire. However, sometimes an old bird's nest that is present inside the chimney might also cause fire.

What Happens When Chimney Fires Occur?

When the creosote in your chimney catches fire, you can see it from outside. Gushes of fire often come out from the chimney. So, you know that it's time to clean your chimney to stop the chimney fire. There might even be a sudden and loud burst in the chimney. There are crackling noises and dense smoke comes out from the fireplace and fills the room. It can result in a fire accident inside your house as well.

According to realestate.com, one of the best ways to avoid a chimney fire is to sweep it properly. It is an old proverb that says â€˜a stitch in time saves nine', but it surely holds true for chimney fires. So, it is a good idea to get the chimney cleaned before it gets too late. If the creosote that gets collected inside the chimney catches fire, it can be dangerous for anyone who is living in your house. It is said that regular inspection of the chimney is necessary to know perfectly when it requires a cleaning. And it is important to clean the chimney properly to avoid any type of fire accident.

Do You Have All the Necessary Equipment?

Are you planning to clean the chimney of your house yourself? It's not impossible to do it. You might clean the fireplace as well. But it might not be possible for you to get the chimney cleaned as well as the professional chimney sweeps. And there are some simple reasons for that. Cleaning a chimney properly requires a lot of tools and instruments. Some of these include:

So, if you are facing a problem of chimney fire, it is important for you to look for a professional chimney sweep. When you are searching for one, you should do a good bit of research for it. You can ask others who had used these professionals for cleaning the chimneys of their houses. You can also do some online research and find the best chimney sweep located close to your place. Check out the reviews to ensure you are hiring a professional who offers good service. Moreover, you should also install a fireguard in your chimney to remain safe.