In recent years, the outbreaks of Zika virus have attracted the world’s attention. For instance, in 2015 and 2016, there was an epidemic of Zika virus in Brazil and many other counties in the Americas. The outbreak affected millions of people and led to thousands of cases of microcephaly — a severe birth defect — in newborns. In addition, the outbreak had a negative effect on the economy and tourism of the affected countries. Currently, it’s virtually impossible to predict whether there will be a new outbreak of Zika virus in the future, where the outbreak will happen, and how serious it will be. If we want to fight off the hateful enemy, we need to know more about it.

Zika virus belongs to the Flaviviridae family and the Flavivirus genus. Other well-known viruses in this genus include the West Nile virus, dengue virus, tick-borne encephalitis virus, yellow fever virus, etc. You may have noticed that many flaviviruses can cause an epidemic in humans. For example, hundreds of cases of West Nile virus infections have been reported in Greece from 2010; dengue virus can cause dengue fever and the latest outbreak of dengue fever occurred in India and Sri Lanka during the summer of the year 2017. These raise a question that why flaviviruses like Zika virus can cause an epidemic in humans. To answer this question, we need to know more about the transmission methods of flaviviruses. 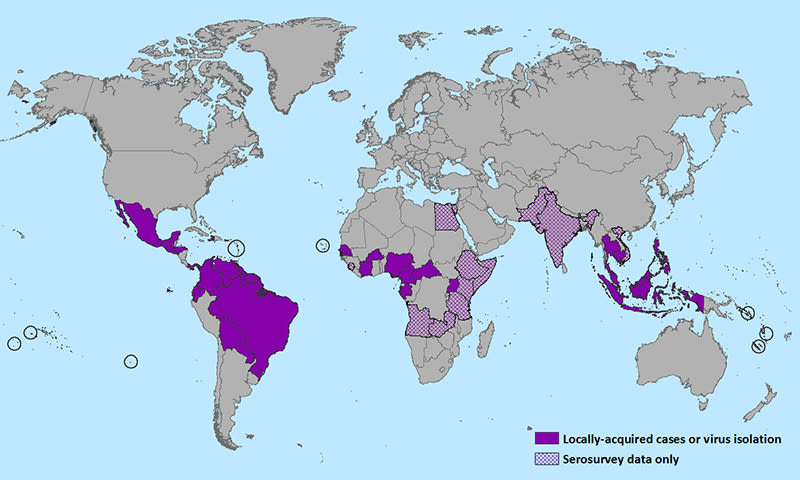 Most flaviviruses are mainly transmitted by the bites of infected mosquitoes, so they are called mosquito-borne viruses. Aedes aegypti and Aedes albopictus are the commonest vectors of Zika virus and are mainly distributed in tropical and subtropic regions, like Brazil. These mosquitoes are difficult to control because they prefer to bite people and they bite during the day and night. As Zika virus is spread by mosquitoes, there is a potential risk of global spread. Other transmission methods of Zika virus include sexual transmission, mother-to-child transmission, blood transmission, as well as laboratory and healthcare setting exposure.

In most cases, people infected with Zika virus do not have any obvious symptoms. Sometimes, the virus leads to an illness called Zika fever. The symptoms of Zika fever resemble that of the flu, generally including fever, red eyes, joint pain, headache, and a maculopapular rash. If any symptoms are serious or persist after a few days, you’d better go to your doctor for help. In adults, Zika infection has connected with Guillain–Barré syndrome, a rare but serious neurological condition causing muscle weakness. Pregnant women should be cautious about Zika Virus. If a pregnant woman has Zika infection, her baby may be born with neurological abnormalities, such as microcephaly — a birth defect where a baby’s head is smaller than normal. Microcephaly is a lifelong condition that has no cure or effective treatment. Babies with microcephaly may experience developmental delay, problems with movement, balance, feeding, hearing, vision, etc.

Why are pregnant women susceptible to Zika virus?

At present, there is no vaccine to prevent Zika infection. An important way to protect yourself from Zika infection is to avoid mosquito bites. However, it’s difficult to completely control the mosquitoes that spread Zika virus, because these mosquitoes prefer to bite people and bite day and night, as mentioned above. Since Zika virus can be spread from one person to another by sex contact, the use of condoms and not having unsafe sex can help reduce the chance of getting Zika infection. Besides, you’d better not to travel to countries where there is a Zika virus outbreak. It’s always recommended to learn more about the country you want to go before departure. If you have already been to a country where Zika occurs, you’d better go to a doctor for help. Pregnant women should pay more attention to Zika virus, as they and their unborn babies are more susceptible to the virus.

If you suspect that you have contracted Zika or if you have symptoms similar to that of Zika infection such as an itchy, raised rash, go to a doctor or other healthcare providers as soon as possible. There are tests to determine whether you are infected or not. Although at present there is no specific treatment, medications such as acetaminophen or paracetamol can relieve symptoms. In addition, getting plenty of rest and drinking plenty of water can also help the body fight against the virus. Enough rest is critical for the proper function of the immune system. Zika infection has been suggested to cause dehydration, drinking enough water helps hydrate yourself.

The lack of vaccines and specific treatments highlights the need for further research into Zika virus. One strategy for Zika vaccine development is using inactivated vaccines or other non-live vaccines. Several candidate vaccines are tested in clinical trials, and one type of vaccine is based on a viral plasmid that expresses the Zika virus envelop proteins.

In summary, Zika virus remains a potential health threat to people worldwide. It’s unknown when and where the virus will cause epidemics. Scientists have been trying to better understand Zika virus, its mosquito carriers, as well as its pathogenic mechanisms.