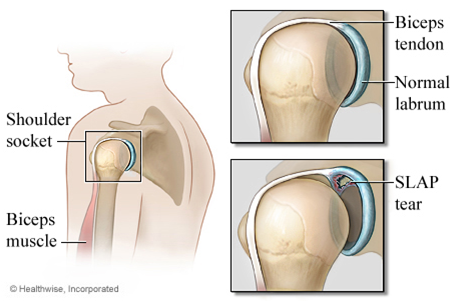 Two famous men remind us once again of, well, our humanness.

Meanwhile in Hollywood, a rep for Adam Sandler confirmed that the actor has recently undergone a procedure for a chronic injury to the shoulder.

"I ripped my labrum. Do you know where your labrum is? It's in the shoulder," he told Leno.

Sanchez, on the other hand, sustained a torn labrum in August during the fourth quarter of the Jets’ third preseason game, which ended in triumph over the New York Giants.

Many sports analysts expect the injury to sideline Sanchez for the remainder of the season. Others view the injury more ominously: a career-ending twist that could culminate in Sanchez's replacement with Geno Smith.

Likewise, it is unknown how long Sandler's downtime would take or how it would affect shooting for The Familymoon, his new film with Drew Barrymore.

What is a labrum?

For something small, the labrum can surely cost millions of dollars in opportunities to celebrities.

A labrum is a ring of cartilaginous tissue on the glenoid, the socket in the scapula or shoulder blade. It girths the head of the humerus (bone of the upper arm), which along with the scapula form the shoulder joint. The function of the labrum is to stabilise the shoulder, i.e. help attach the head of the humerus to the glenoid. The top of the labrum also connects to the biceps tendon.

Such tissue is very liable to tearing. Damage to the labrum near the biceps anchor is called a SLAP (Superior Labrum Anterior to Posterior) tear.

Sanchez apparently incurred his SLAP tear when trauma caused his humerus to detach from the glenoid. Then again, SLAP tears may develop over time due to repetitive movements, e.g. overhead throws in basketball, one of Sandler's favourite sports.

But an isolated SLAP tear is quite unusual. The tear usually occurs in tandem with other shoulder conditions, such as a rotator cuff tear.

To make matters worse, SLAP tears are difficult to detect via CT scan, MRI, ultrasound, or X-ray. A shoulder arthroscopy can simultaneously diagnose and treat a SLAP tear.

How to treat a SLAP tear

Sanchez has so far revealed plans to undergo shoulder rehabilitation, but surgery is still inevitable; the injury to his labrum will not just run its course. Sanchez can return to play after rehab but must still get surgery offseason.

Lest we forget, the labrum is a cartilage. This means it gets less blood flow than, say, the skin tissue. Result: Labral tears are barely self-limiting, and repair can take years without surgery.

Sandler could not ignore the discomfort in his labrum months after he tore it, hence his operation.

An arthroscopic shoulder surgery is usually prescribed for SLAP tear patients. The specific kind of arthroscopy depends on the type of SLAP tear, cause of the injury, fitness level, and age, among other factors. The surgeon's choice is also informed by the presence of other injuries.

After surgery, the surgeon may require the patient to minimise activity in the affected area for up to six months.

But this is a deal better than leaving a SLAP tear alone. Left untreated, this condition is known to freeze or reduce motion in the shoulder. No active athlete or actor would want that to happen, of course.