According to the National Institute on Drug Abuse, also known as NIDA, marijuana is a drug that is typically smoked. Cannabis, typically referred to as ‘weed’, ‘grass’ or ‘pot’, is most often spread on rolling papers to form a type of cigarette. This ‘weed cigarette’ tends to be known as a cigar-like blunt or a joint. By smoking this item, the THC in the marijuana is released and absorbed into the individual’s blood stream via their lungs. Bongs, bubblers, and glass pipes can also be used to smoke marijuana.

It is also possible to consume marijuana via food, and this is often utilized by people using medical marijuana. In addition to the well-known weed brownie, marijuana can also be included in ice-cream, candy, and butter. Certain states in the United States have legalized marijuana; however, there are specific regulations that need to be adhered to for labeling and packaging these edible marijuana items.

Cannabis can also be ingested utilizing liquid form, such as being brewed in a tea. The drug can also be added to other beverages, such as alcohol, soda, and milk. Hashish is a type of resin created from the concentrated marijuana plant. Furthermore, forms of taking in marijuana include via oral sprays, tablets, and topical oils.

One of the most current methods for inhaling marijuana is via vaporization. Vaporization is a ‘smokeless’ system of delivery utilizing devices known as vaporizers or electronic cigarettes. The marijuana vaporizer operates by heating cannabis at low temperatures; thereby, the plant’s extracts are released. According to various published studies, vaping is considered a healthier option when compared to smoking marijuana.

A study published in the Journal of Cannabis Therapeutics found that vaporized marijuana contains less cannabinoids as compared to the typical marijuana cigarette. Furthermore, evidence from a 2007 study in the Clinical Pharmacology and Therapeutics Journal indicated that vape users inhale fewer toxins and carbon monoxide elements than traditional weed smokers. However, according to the Colorado Department of Public Health, not enough research is available to determine whether or not vaping is better than smoking unfiltered marijuana.

How Does Marijuana Affect The Mind?

Marijuana can affect a person’s mind by impacting on the same pleasure center of the brain that is targeted by substances such as alcohol, cocaine, and heroine. Dependent on the quality, quantity, and method of consumption, the marijuana can produce a sense of euphoria or ‘high’ by stimulating brain cells to release dopamine. If the marijuana is inhaled, the high is experienced almost immediately. However, if the marijuana is consumed via food, the sense of euphoria is delayed for hours because the drug takes time to release dopamine in the brain.

Additional alterations in a person’s mood can occur when smoking marijuana, such as feelings of relaxation. The majority of users will experience a heightening in their sensory perception; for example, noises will become louder and colors appear more vivid. For some users, the marijuana can result in an altered perception of time, and an increased appetite also known as ‘having the munchies’. Of course, the impact will vary according to the individual, how often they have utilized marijuana, the strength of the substance, and how often it has been since their last ‘hit’.

According to A.J. Fabrizio, a marijuana chemistry specialist at Terra Tech Corp in California, in many cases there are reported side effects. Some of the side effects of THC can include feelings of anxiety, elation, short-term memory loss, tachycardia, sedation, pain relief, relaxation, and many more sensations. If marijuana use begins in one’s teenage years, the drug can have a significant effect on brain development resulting in decreased brain activity, a smaller than average hippocampus, and fewer neural fibers in certain areas of the brain.

According to research conducted by the University of Montreal and published in the Journal of Development and Psychopathology, students that began smoking marijuana during their teenage years reported poorer results on cognitive tests as compared to non-marijuana smokers. The study discovered that marijuana smokers also presented with a higher rate of school dropouts; however, if the individual began smoking during adolescence (around 17 or 18), they did not present with the same issues on cognitive tests.

How Does Marijuana Affect The Body? 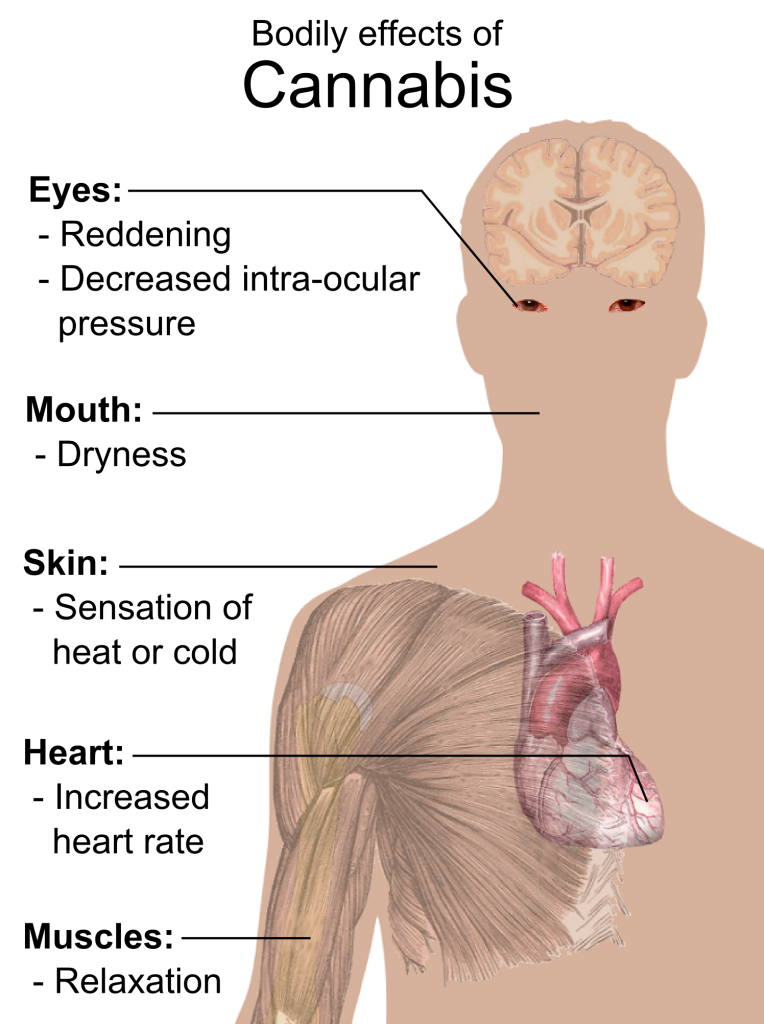 Evidence has found that marijuana smoking has many of the same effects on the body as traditional tobacco smoking, including respiratory problems like phlegm production and an increased daily cough. The more frequent respiratory problem facing marijuana smokers is acute bronchitis and an increased chance of lung disease, according to the National Institute on Drug Abuse.