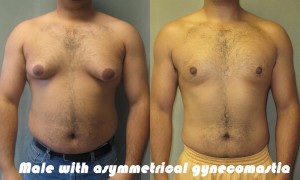 Gynecomastia is known as enlargement of a man’s chest such that it resembles a woman’s breast. This is basically caused by an endocrinal hormonal imbalance. The imbalance is of the hormones estrogen and testosterone. This disorder is common among pubescent males and in some cases it affects newborn babies and older men too. It must be kept in mind that the changes in hormones can be dangerous and that gynecomastia is a side effect.

It affects the breasts either evenly, unevenly or it may just affect a single breast. Albeit it is not a serious medical condition, it does however cause psychological distress and mild physical pain to the patient. It can, in time, go away on its own, but if it doesn't, treatment is required for sure.

Most of the men tend to get affected by gynecomastia due to the lack of proper awareness in the society. Busy schedules also stop them from taking the time out to get checked and treated.

Should not be confused with Pseudogynecomastia

Pseudogynecomastia is a type of disease in which male's chest is enlarged due to the deposition of bodily fats, hormonal imbalance is not accountable in this type of chest enlargement. It may be due to the after effects of withdrawal symptoms of gym or workout exercises.

In the case of gynecomastia, the below given symptoms are observed readily.

Depending upon the severity of the disorder, it is graded into 4 grades or categories.

To better understand the disorder, we must analyze the causes and symptoms. Let us take a look at the causes.

What are the Causes of Gynecomastia?

As mentioned earlier, the onset is caused mainly (around 70 % of the time) by the imbalance of estrogen and testosterone. Testosterone is the hormone responsible for the development of secondary sexual characteristics in men and estrogen performs the same role in women. If estrogen production starts in men and at the same time androgen (male hormones) production decreases, gynecomastia may occur.

Drug and Steroid Use

Usage of marijuana and muscle buffing “gym shelf” steroids in young men is a common cause of this disorder. Other drugs such as methadone, kidney and liver treatment medicine, hormonal therapeutic medicine, antifungal medicine, antidepressants, herbal products such as lavender oils, immunodeficiency virus medications are also responsible for causing this disorder.

It is also noteworthy that all illegal drugs such as MDMA, methamphetamine, methadone, heroine and concentrated alcohols are also a leading cause of this disorder.

Cosmetic products that utilize lavender are also known to cause it. Athletic performance boosters should also be avoided as they tend to increase the hormonal imbalance thus plunging the body towards gynecomastia.

Temporary gynecomastia may occur in infants due to the imbalance of hormones. In boys, the onset occurs before their teenage and it goes away after a few weeks without treatment. Malnutrition causes hormonal imbalance thus also causing it.

All the reasons that pertain to drug use and medication are termed as non-physiological reasons. Supplements in medicines are a common cause of gynecomastia. Other reasons may include climatic changes and allergies.

Testicular cancer or benign tumor inhibits the production of testosterone causing the disorder. Treatment is sought in such cases first for the cancer and later for the disorder.

The most common symptoms are swollen breasts and soft tissue development in the chest area. There is also nipple discharge in gynecomastia. Pain may or may not occur depending upon the severity of the disorder.

Breast cancer, although most uncommon in men, may also be a symptom of gynecomastia. Infection may occur in the swelling.

When a patient with the disorder visits the doctor, he shall be asked whether this condition runs in the family or not.

Genital, abdominal examination is also done in addition to breast examination. Tests are also conducted, that include; blood tests and a mammogram. Based upon the initial test results, the patient may also need to get a MRI scan, a CRT scan, testicular ultrasounds and tissue biopsies.

Mammography is examination of the suspected area via radiations. But such diagnosis is rarely needed because the root cause is either the adrenal gland or the testicles. A computerized tomography scan and MRI are done for the same reasons as the mammography; to analyze the location and the abnormalities associated with it.

Going on a diet is a good way to treat gynecomastia. However the diet must be specifically low fat. It is so because the breasts in men are made up of mostly fats and lipids. Curbing the supply will cause the gynecomastia to cease. But the diet must be protein and carbohydrate rich. Dieting is supposed to be the number one method for one to try and test before going to a doctor because if it is treated with dieting, you don't need to visit the doctor.

Gynexol is a famous cream used in treatment of gynecomastia. It comprises of Vitamin A and Aloe Vera juice. It acts as a fat shrinking agent and shrinks the fatty tissues thus permanently treating the disorder.

Creams are convenient in the sense that they can be easily applied on the body and that they are cheap to buy. They are commercially available too.

In some cases, however the creams do not affect the body at all due to a tough skin of the user. This causes the cream to not be absorbed by the skin and thus it cannot affect the area.

Treatment pills or supplements are fast and they are effective. They tend to balance the imbalance of the hormones. They are used worldwide and are more trustworthy, a source of treatment as compared to their counterparts; the creams.

The advantage gynecomastia supplements have over gels is that pills are absorbed in the bloodstream and they affect the target areas much faster.

There are, however, some disadvantages of pills. They may cause unwanted side effects.

The variations of the same pills in the market are also a cause of confusion. Some of them are very effective and some are just downright ineffective.

While not exactly a way to cure the disorder, it is used in the treatment of the psychological distress caused by having the disorder. A person who is not stressed about his disease is a person that can cope better with it.

Herbal medication is a very successful branch of the treatment of diseases such as this one. Herbs, both eastern and western, have been used to treat diseases for centuries. The prescription is usually done by a tribal “healer” or a “hakeem”. This method is unconventional. It does, however, cure the disorder.

Androgen deficient therapy or Radiation therapy is another method for the treatment of gynecomastia. Radiation however has some side effects which may prove dangerous in the long run.

Tamoxifen and raloxifene are known as selective estrogen receptor modules. They are used in the treatment of gynecomastia, but are not approved by the FDA in the USA.

Danazol is an androgen. It functions like testosterone. It is taken in the form of pills or syrup and also proves to be effective in curing the disorder.

In this method, hormones are injected in the body and some of them are destroyed by the same method. This serves as a balancing act and goes a long way in healing not only gynecomastia but also other hormone-related disorders.

Sometimes the onset of gynecomastia may be caused as a side effect of some other medicine that you are taking. To confirm that, visit your doctor and consult him.

Gynecomastia may persist longer than it’s time because of the psychological -factors as mentioned earlier. Going to a support group or a therapist may decrease the timespan of it.

Encouragement and moral boosting, leads to the regulated production of hormones and thus aids in the normal function of the body which leads to cure of the disorder.

Gynecomastia may be treated surgically using subcutaneous mastectomy, liposuction assisted mastectomy, laser lipolysis. These methods are not risk free as they sometimes cause hematoma, wound infection due to surgery, un-symmetric shape and necrosis of the area. Painful lesions and scars may form along with other deformities.

The skin along the nipple is incised and the “lump” of the fat that causes the characteristic swelling is removed. The breast gland tissue is removed by making small incisions. The reason for small incisions is to reduce recovery time. It is by far the most effective procedure in the surgical treatment of gynecomastia. Minimal incisions leave minimal or no scars. That is why it is most aesthetically preferred method.

In this method the breast fat (NOT the tissue) is removed surgically. This method uses more recovery time and has more risk of complications such loosening of the skin from where the fat was removed from.

This method, albeit not as much effective as mastectomy, is a more popular and contemporary approach. Liposuction may need to be done more than once for the treatment of gynecomastia.

Laser lipolysis follows the same principle as liposuction but differs from it in one detail. It is a non-invasive procedure in which the excess of fat in the breasts is removed via laser. The laser serves as a melting agent in the sense that it dissolves the fat and allows your body to metabolize it or the doctor can “suck” the “melted” fat and remove it from the body.

This method is uncommon because of the lack of awareness in people. It is neither the best method nor is it the worst. It strikes a balance between the liposuction and mastectomy.

Complication; Hematoma as a Result of Surgery

In some special cases, the surgical procedure may cause blood vessels to burst and bleeding may occur internally. In other cases, tissue damage and organ damage may occur at the hands of inexperienced practitioner.

Luckily, critical risk factors from gynecomastia are rare. Your particular dangers for gynecomastia will be talked about by your consultant or the surgeon. Every single surgical strategy has some level of danger. A portion of the potential inconveniences of all surgeries are:

You can minimize certain dangers by taking after the guidance and directions of your board-ensured plastic specialist, both prior and then afterward your gynecomastia surgery.