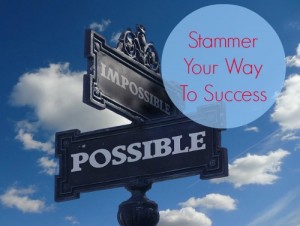 A stammer is a speech disorder, four times more common in boys than in girls, which involuntarily impacts the flow of speech.

Like fingerprints, no two individuals who stammer are the same.

It is typically first identified in children between the ages of three and five, with over 90 per cent of cases evident before the age of eight. It is quite common for children to experience periods of dysfluency during their spurts of language growth, however this is typically short lived and its departure is usually as sudden as its onset. Surprisingly, only 1% of adults stammer.

What is a stammer?

When someone stammers, their sounds are prolonged and in many cases, words are repeated. A prolonged sound can be described as the unnatural lengthening of a word such as "mmmmilk“. This differs from a repetition, which is more like “to-to-to-tomorrow“.

Stammering is not contagious. Whilst genetics, brain development, stress and one's environment are said to be contributing factors, there is not definite cause.

Researchers remain baffled as to the actual trigger and whilst there is no known cure, it should by no means be a limitation. In fact there are a number of stammering success stories. The recent movie entitled â€˜The King's Speech' is just one example. Not only did it receive 12 Academy Award nominations, but also it did a fantastic job of opening up communication and bringing to the table the conversations, which many families had previously hidden.

Did you know that Marilyn Monroe stammered? So too did Sir Winston Churchill and even Isaac Newton.

When You Don’t Stammer

Life brings with is many hurdles and speed humps but learning a few tricks, as well as seeking advice from a professional if needed, will ensure that you can succeed too. And the more people are educated, the more they will see you as an individual and not simply the stammer itself.

Did you know that someone who stammers will not experience this condition whilst singing? Whispering is also a clever trick, actually used my Marilyn Monroe, to disguise the speech impediment.

Those who take on an alter ego, or become someone else whilst acting also are known to completely avoid any prolonged speech issues. Those who stammer also share the fact that whilst talking on an un-connected telephone (yes, a pretend one), talking to animals, themselves and even babies are other instances where they do not stammer anymore.

For those who do not experience this speech impediment, understanding just what it is, can be quite a mystery. The bulk of the condition is generally hidden from the listener. The physical symptoms may only be about 10% whilst the potential embarrassment and frustration (the other 90%) is well hidden.

Whilst stammering and nervousness are not actually related, those who do stammer may definitely feel nervous about speaking because of the potential perception and as a result this may exacerbate the situation.

Demands for explanations and being pressured, as well as anxiety, stress and even fatigue can cause further issues. The key is knowing how to manage it and understanding that excitement and confusion can trigger a repetition of words too.

Is There A Cure For Stammering?

Whilst stammering cannot be cured it can be controlled to the point where it is virtually undetectable. In many cases it is simply a case of applying a slightly altered speech style and it will be under control.

Stammering is not a condition that should label you and more importantly if you do stammer, you need to know that many people, just like you, have achieved great success and will continue to.

VinceBorg is author at LeraBlog. The author's views are entirely their own and may not reflect the views and opinions of LeraBlog staff.