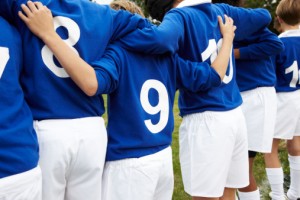 Have you ever wondered if there was more to the uniforms of your favourite basketball teams or football players than simply identify Team A from Team B?

Uniforms appear to have developed as an integral part in the field of team sports. The key reason why, is because it contributes considerably not only to players, but to anyone involved in sports.

Yes, team wear helps members spot their team mates easier on the field of play, but going further: uniforms speak a loud proclamation of unity and branding for the team and its followers. Branding equates the team and unity, whilst, unity is the motto of team sports. A team needs to be unified to achieve the goal of winning. The team's many members have to become one unit to accomplish triumph.

It's true that team uniforms use figures and names serving as a visual identifier for sports adjudicators and commentaries, helping them to easily determine performance for each member, but look deeper and we realise that with their striking logos and winning colours, the players bind their loyalty to their team by proudly wearing their uniform.

Continuing to give a sense of belonging to the individual and solidarity to the whole; uniforms create identity, yet their power spans more than just identity and unity: uniforms evoke symbolism. Uniforms for each competing team not only represent their team's players and management, but also provide a glorious symbol of their supporters' devotion.

The flaming ball of the Miami Heat basketball jersey ignites the passions the team's fans. The royal combination of purple and gold of the L. A. Lakers states a quite imperialistic appearance of elegant play, a cut above the rest.

Die â€“hard fans, sports aficionados, and even non-sports watchers love to wear the trend setting uniforms that certain championship teams are using. Permanently placing their memorable design in the hearts and minds of thousands of people sports uniforms even create their own corner in the fashion world. People are wearing their hero’s uniform or a replica of it, others are just wearing replicas of Ronaldo’s jersey to catch up with the current trends. Indeed, the power of uniform certainly emanates far outside the walls of sports play itself.

Realising the power of uniform, sports teams should be prepared to harness that power by choosing a designer that understands the goals of the team. There are many, but companies like DRH Sports set the standard.