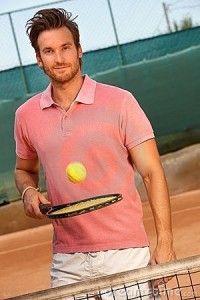 Tennis is one of the UK's most ancient and popular individual sports, with the foundations for the modern game having being laid during the 19th century. While it also has historical roots in French and Asian culture, the game as we know it today was developed in the heart of the UK by participants of the popular Basque sport pelota. It has subsequently developed into a much loved summer sport, and one which is watched by millions of fans worldwide.

As anyone who watched the gruelling 2013 Wimbledon final between Andy Murray and Novak Djokovic will testify, however, tennis is also a physically demanding and intense cardiovascular sport. Despite its stop-start nature, the stamina, conditioning and speed required to traverse the court and compete in individual points can be extremely demanding, regardless of the exact level at which you play.

As a consequence of this, tennis delivers an excellent physical workout that can boost both aerobic fitness levels and a participant's balance. Consider the following health benefits of playing tennis and their exact impact on the human form:

Perhaps the most positive benefit of playing tennis is that it boosts each player's level of aerobic fitness, which in turn enables individuals to burn calories and lose excess weight. It is estimated that the average player will cover between 3 and 5 miles during a three set match and burn up to 600 calories, while the intermittent combination of sprinting and striking the ball forcibly. As active points and rallies demand continuous movement from participants, tennis can be considered as a reliable form of cardiovascular exercise that improves speed, balance and endurance.

Consider the Benefits of Anaerobic Fitness

In addition to this, tennis also has the capacity to develop each individual's level of anaerobic fitness. This relates to short bursts of intense physical and cardiovascular activity, which perfectly describes the typical rallies in male and female tennis. It is estimated that the average rally lasts for between 5 to 7 seconds, while players can expect a further 25 seconds of rest between points. Typical rallies also consist of numerous sharp movements, while they may also be required to sprint from side to side and from the baseline to the net during points.

On another note, the strokes and individual movements associated with tennis can also help to improve your physical conditioning and develop muscle tone. By regularly honing your serve, forehand and backhand strokes on the practise court, for example, it is possible to enhance your core stability and give better definition to you midsection. By assuming the correct starting position for each shot and repeatedly striking the ball in a short space of time, who can effectively rotate and tone your torso while also working your thighs, bottom and arms.

If you have ever watched six-time Grand Slam winner Novak Djokovic ply his trade, you will notice that he has founded his success on improved conditioning and physical agility. Tennis tests each individual's flexibility and reflexes on the court, especially when you consider the athletic serve and volley technique that draws players into the net after they have served or delivered a return. The Serbian world number two has also perfected the challenging art of sliding along the baseline to reach accurate and powerful forehands from opponents, which demands flexible hamstrings and a well-conditioned lower body. Your physical agility will only be improved by playing tennis for a concerted period of time, especially if you engage in long baseline rallies or regularly play approach shots into the net.

This article was contributed to Laura, who is a health blogger from the UK. She has a particular passion for tennis, and has previously written for Wimbledon Debentures.