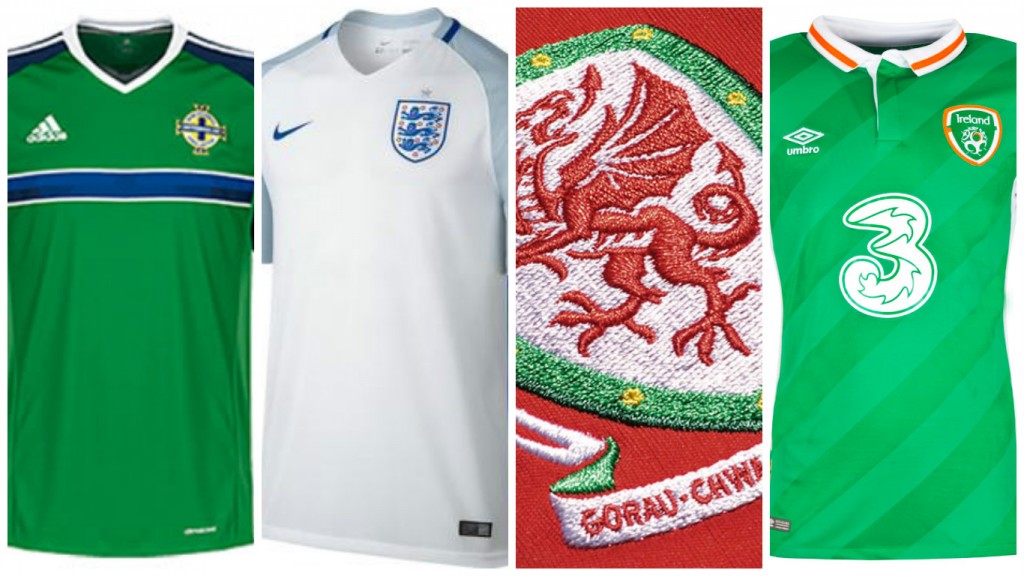 With Euro 2016 set to begin on the 10th of June, fans are looking forward to see how the ‘Home Nations’ (England, Wales, Northern Ireland and the Republic of Ireland) will fare. The peak of Euro 2016 interest for the home nations will no doubt be centred on Group B, where England are set to lock horns with Wales.

Undoubtedly, England would be considered the home nation with the highest level of quality across the park, but that quality is often found wanting in major tournaments, with the Three Lions often seen to underperform when the chips are down. Bad luck has also been a thorn in the English national team's side, especially when it comes to penalty shootouts, where their record at major tournaments is among the worst in the world.

England's best European Championship performance was in 1996 while as host, they reached the semi-finals where they narrowly lost out to eventual cup winners Germany on penalties. England also made it as far as the quarter-final stage in both 2004 and 2012, but lost in penalty shootouts to Portugal and Italy respectively.

England’s strike force going into this tournament is quite enviable, with Harry Kane, Jamie Vardy, Marcus Rashford and Wayne Rooney among their options up front. However, England's defenders are perhaps not so impressive, and might be seen as the weak link in the team, so Eric Dier’s presence in the holding midfield role will no doubt play an integral part in the Three Lions' campaign.

Wales boss Chris Coleman will be leading his team into virgin territory as they play their first ever European Championship finals. It’s their first major tournament since they played in the 1958 World Cup. The Welsh have relied heavily on the performances of Gareth Bale in recent times, with him scoring seven of their eleven goals during the qualifiers. Despite qualifying, coming up with goals has been something of a problem for the Welsh. Out of the teams which qualified for Euro 2016 only Albania scored less.

When you consider that Wales have lost their last four encounters with England, failing to score in any of them, the odds are stacked against them. One Welsh player who doesn't fear being considered an outsider is midfielder Andy King, who recently won the Premier League with Leicester City, who were 5000/1 at the start of the campaign, so anything is possible in football!

With a brilliant performance at the Euro 2016 qualifying campaign that saw them finish at the top spot of Group F, Northern Ireland have already far exceeded expectations as far as Euro 2016 is concerned. While this is Northern Ireland's first ever UEFA European Championship finals appearance, they have appeared three times at the FIFA World Cup, with them making all the way to the quarter finals in 1958, their debut at a major tournament. Could this be an omen for similar success at Euro 2016? With Germany, Poland and the Ukraine in their group, progressing to the knockout stages will be tricky, but far from impossible for Northern Ireland.

If Northern Ireland are to do well at Euro 2016, star striker Kyle Lafferty will need to carry on his impressive form into the tournament. Despite struggling for form at club level in the past season, the rangy forward bagged himself seven goals in the European Championship qualifiers, putting him among Europe's elite strikers in that regard.

After a sensational 1-0 victory over world champions Germany in the qualifiers, the Republic of Ireland will be seen as something of a dark horse at Euro 2016. While they are not fancied to win the tournament, they have built themselves a reputation as giant killers. The nation's most memorable major tournament victories include 1-0 wins against England in Stuttgart (Euro '88) and Italy in USA '94. The latter display is considered particularly impressive as Italy went on to the World Cup final that year, narrowly losing out to Brazil on penalties. Despite having a lot more quality players on paper, Italy and the other teams of Group E would underestimate the Irish at their peril.

While the Republic of Ireland's all-time leading goal scorer, Robbie Keane, has been named in Ireland's Euro 2016 squad, he is unlikely to play the full 90 minutes for most of the scheduled matches. Fortunately for Ireland, they have a capable alternative in the shape of Shane Long, who has proven himself to be something of a big game hunter, scoring against the likes of Germany and Holland recently. With him leading the line, along with Ireland's penchant for upsetting the big boys, the Republic could turn a few heads this summer.

Can a Home Nation win it?

With no clear favourites for Euro 2016, the tournament really is anybody's game. Given the overall strength of their squad, you would have to say that England would be the most likely home nation to take the title home. That said though, in a knockout style tournament, one small mistake can see a big side eliminated by an â€˜inferior' opponent, so it's too tight to call. Given the way world football has been playing out recently, it might be worth throwing a few euro on one of the less fancied home nations as you'd just never know!