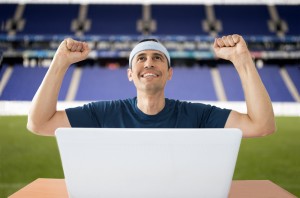 Betting on sport is not easy; it might seem as if anyone can make an easy pound or two when we here friends bragging about their successful gains, but you never hear about the losses.

If it's possible, leave your betting as late as possible, which gives you a chance to peruse formations and team selection. A 5-4-1 formation, for example, might be regarded as a fairly negative structure as only one attacker is playing and five men are playing across the back. That, combined with a team's recent goalscoring form, might be enough to opt for a low-scoring game. Bookies typically offer odds on below/above a certain number of goals in a game.

Jose Mourinho is a master at using team selections and strategy to gain points in difficult league games; last season his Chelsea side snagged six points at Manchester City and Liverpool, conceding zero goals in the process.

Mourinho is also a good yardstick for streaks; long unbeaten runs which stretch back years or even decades. If you want to make money, bet on Jose Mourinho sides not to lose at home, as the Portuguese maestro once commandeered a run of 150 consecutive games without defeat at home, spanning four leagues and more than nine years. His unbeaten run with Chelsea (referenced in this Independent piece) ended in shock circumstances to Sunderland last season - but the Blues remain unbeaten at home since that game.

Boxing is a difficult sport to predict, particularly when either participant can win at any time with one well-placed punch. Again, betting late is sometimes a fine idea - wait to see the fighters at weigh-in time as it can sometimes reveal a boxer's well-being. A boxer who has made several trips to the scales to make weight might be struggling for fitness, while conversely a heavyweight who has packed on the blubber since his last scrap may be one to avoid.

A trainer is one of the most underrated weapons in boxing, and there are some coaches to never back against. Freddie Roach of the Wild Card Gym in Los Angeles is not a man to be taken lightly.

There was a time when Manny Pacquiao was an underdog, against the much larger Oscar De La Hoya - he's no longer an underdog in any fight. Roach, in fact, accurately predicted the destruction of Sergio Martinez by his fighter Miguel Cotto in June, as reported in the Daily Mail. In the UK, Joe Gallagher of Manchester is building an impressive stable. So if you are betting on boxing, take a few moments to analyse the form of these trainers before betting against them - at your peril.

As for fighters, it would take a brave bettor to go against UK Olympians such as Anthony Joshua and Luke Campbell, no matter the opponent. And how much longer can amazing veteran Bernard Hopkins keep turning back time and surprising people? The guess here is that the near-50-year-old has one last great performance left for his fight against unbeaten monster Sergey Kovalev in November.

In other sports, the best advice is to know the sport before betting. Know which drivers thrive in Monaco and the ones who get caught in the bottlenecks. Find out which batsmen perform well in India or Australia or the West Indies - and knowing how pitch conditions will affect a player can have a bearing, so again consider betting late.

Above all, know the types of bets that are available. There are thousands of different bets for each game or contest, from number of points to time of first punishment (yellow card in football, for example) to many other elements, so don't just bet on the first thing you see as there may be better value elsewhere.

Ella Mason is author at LeraBlog. The author's views are entirely their own and may not reflect the views and opinions of LeraBlog staff.