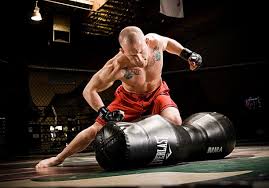 Working out as we knew it has changed forever. We have discovered more in the last 20 years when it comes to strength and conditioning then the previous 50! The latest covers of health and fitness magazines aren't bodybuilders with huge muscles like Dorian Yates and Lee Haney.

What fills the covers now are the athletic bodies of people who l can fight. These are MMA fighters and their training strategies and methods have changed the fitness game forever and for the good. The popularity of MMA has exploded, however a large portion can be contributed to the training that fighters go through which is grueling, hardcore, and exhausting workouts and most importantly it's moving to a gym near you!

MMA Fighters showing up in the health and fitness magazines include; Jon Jones, George St. Pierre and Ronda Rousey. MMA Training, can also be classified as â€˜athletic base training' not only targets a muscular body it also pinpoints an athletic healthier one all at the same time!

Today's exercises and routines seen at the local gym are straight from the world of Mixed Martial Arts (MMA). The other day I walked into my local gym and they had removed all the machine weight lifting equipment in favor of making room for kettlebell training. Although kettlebells were developed in the 1700s, they have been used sparsely throughout history. It wasn’t until the world of MMA training saw their true potential that this type of training and equipment became popular. You will find a workout routine included in this post that utilizes kettlebell movements.

Combining cardio with weight training is another lesson taken straight from the pages of MMA. Before MMA began shaping the fitness world a person working out would either focus on cardio or weight lifting. However, MMA training discovered huge benefits and payoffs when cardio and weight training are combined.

Why MMA Training Is So Popular?

If you're into bodybuilding then you train like a bodybuilder if you run marathons then you train like an endurance athlete. However, if you are an MMA fighter what type of training do you do? When a fighter is in the cage there are such a large variety of variables that have to be accounted for a fighter has to be ready. So, when they walk into the octagon or cage they need to be ready for anything. This is why MMA training pushes the envelope when it comes to functional training.

Functional training is focused on strength and movement. Unlike, bodybuilding who focus on creating mass in the muscle, MMA training focuses on strength while moving. If you have ever heard the term ‘farm boy strength’ this is exactly what type of effect that MMA fighter training achieves.

Another element of MMA training that has been incorporated into the fitness world is to minimize the amount of time by increasing the intensity! Instead of focusing on a single muscle per exercise MMA training incorporates several muscle groups with one exercise. What this type of training does is teaches muscle fibers from various groups to fire simultaneously and this creates true power. Unlike bodybuilders who concentrate on a single muscle during a movement MMA Training is about explosive movement teaching the body to work together and in unison.

For example, bodybuilders are well known for the curl which is an exercise to increase size in the bicep. However, when the person is doing the curl they are in a stationary position with all the focus going into the bicep. This type of weightlifting is great for bodybuilding but does nothing when it comes to building functional strength and the athletes cardio.

When building functional strength one of the best movements is known as the power clean where a barbell is taken from the ground to the knees. Then the barbell is taken from the middle of the thighs to the shoulders by extending your hips and exploding. This trains several muscles at a time to coherently explode instead of a single concentrated movement like the curl. Several muscle groups are hit when doing a power clean which include; legs, core (abs and lower back), arms, back, and the shoulders. In this type of movement more speed and power equal more strength. Also, another important element of this type of exercise is that it builds the cardio system as well.

MMA training focuses on functional strength as opposed to building mass or strength. This is why it has became so popular. People can feel the difference in their bodies throughout their daily movements. They also feel the increase in their cardiovascular system with their increased lung capacity.

The next time you go to the gym spend a little time doing some kettlebell movements, like the kettlebell snatches (see included training routine) or the kettlebell deadlift which will explode your functional strength. There is a routine included in this post that will give you a head start in learning MMA training. This routine will not only building your core strength, but also will help your cardio conditioning. This type of training will also give you a great deal of energy throughout the day so you will find it easier to move and you will be less fatigued by the end of the day.