Many people who undergo suprapubic catheter insertion have concerns about safety. A study published in the Annals of The Royal College of Surgeons of England in 2006 addresses this concern. The study looked at a total of 219 patients who underwent suprapubic catheter insertion utilizing cystoscopic guidance at two urology institutions. The surgeries occurred between 1994 and 2002. The conclusions are discussed below.

The study was undertaken because the use of suprapubic catheters is a popular option for long-term bladder drainage when individuals are having problems with urination. It had been considered to be a simple surgery and there was close to nothing published concerning complications and mortality rates associated with the procedure.

What Had Been Known

Earlier findings in a study of 157 patients at the National Orthopaedic Hospital regarding the process of insertion of suprapubic catheters, which was done using guidance provided by a cystoscopic, found that there was a 10% complication rate. Bowel injury occurred in 2.7% of all cases. The mortality rate, which was 0.8% in this study, was low. 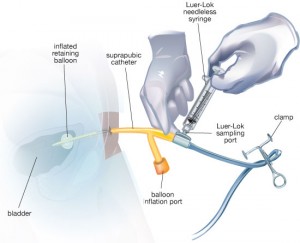 The new study regarding suprapubic catheter insertion utilized the pool of 219 patients mentioned above. This group had a complication rate of 29%. But this study included complications not only directly related to the procedure, but, also, those related to co-morbid conditions. Of the 29% who had complications, 33% of those came under this category. The incident of bowel injury was 2.4% as compared to 2.7% in the earlier study. The 30-day mortality rate was 1.8%.

In the original study group 71% had previously used urethral catheters, while in the latter group 53% had done so. The use of urethral catheters along with problems associated with voiding urine predisposed these patients to two possibly serious conditions: urinary bacterial contamination and postoperative urinary sepsis. The study noted that the use of intra-operative intravenous prophylactic antibiotics is highly recommended in order to fight the possibility of bacterial contamination and the development of infections. Of those in the study who had long-term suprapubic catheters, 21% experienced recurring urinary tract infections. Those who had a neuropathic bladder had a much higher rate of infection.

In the first study, all who received suprapubic catheters were neuropaths, meaning that they were dealing with a serious condition that had caused damage to the nervous system. In the second study, 57% had such disorders. The new study notes that the surgery for suprapubic catheter insertion is especially risky for this group. They had more complications and insertion was more difficult. The study noted that a senior surgeon should operate on any patients who fell into this group, with a senior anesthetist present. It also observed that the environment for such surgeries should be highly controlled.

For those who are relatively healthy, suprapubic catheter insertion is a safe procedure, while for those who are suffering from other conditions or who are elderly, the procedure is more risky. Overall, however, it is safe as long as certain precautions are taken. The point is to not treat each case in the same manner. Prior history, the state of one's health, the age of the patient, and the conditions under which the insertion takes place are all factors that work towards determining possible outcomes.