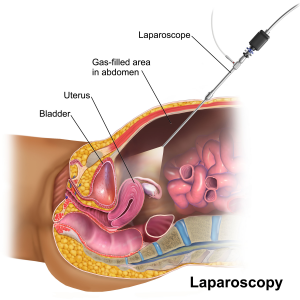 Laparoscopic Myomectomy is a medical procedure used to remove the non-cancerous fibroids growing inside the uterus keeping the uterus safe giving the woman opportunity to get pregnant again in future. Bigger fibroids need an abdominal incision while smaller fibroids can be easily removed by laparoscopy itself.

A myomectomy surgery can be done in various different methods depending on the number, size and location of the fibroids inside the uterus.

Why Is The Surgery Performed?

Your doctor might suggest a laparoscopic myomectomy for fibroids causing trouble to you and interfering with your normal activities. In conditions like –

Women who suffer from uterine fibroids can have these common symptoms:

The laparoscopic, or robotic myomectomy, is a minimally invasive medical procedure used to remove the uterine fibroids growing inside the uterus but are noncancerous. In this type of myomectomy surgical procedure the surgeon will make quite a few minute incisions around the area of your belly-button. Out of various incisions, one incision is used to insert the laparoscope which is a thin tube fixed with a tiny video camera and placed inside the abdomen. The surgeon will further use other tiny surgical tools attached to similar laparoscopic tubes to remove the uterine fibroids. The robotic feature of the surgical device enables the surgeon to control their movements exactly and effectively from a remote console that provides a perfect view of the surgery being performed inside your abdomen. The doctor cuts the bigger uterine fibroids into smaller pieces and removes them through the incisions made in the abdominal wall. The surgeon later uses the laparoscope to stitch the incisions made in the uterus and closes it after removing all the fibroids. This minimally invasive surgical procedure is useful in removing growing fibroids that are attached to the uterus wall from outside with a stalk as well as subserous fibroids.

Advantages of a Laparoscopic Myomectomy

The main advantage of a laparoscopic myomectomy surgical procedure is that the scars are very less and usually heal faster. There is very less loss of blood. The pain is reduced to quickly in few days and the myomectomy procedure helps you get relief from excessive menstrual bleeding and severe pelvic pain caused due to the presence of uterine fibroids. Along with these benefits the myomectomy procedure also helps in improving fertility ability and increases the chances of pregnancy.

Like any medical procedure, a laparoscopic myomectomy surgery does have some common risks. Complications can involve certain injuries to internal organs and internal bleeding. Also, your uterus may become weaker after the surgery. Hence, women planning for pregnancy in the future are usually advised to have an abdominal myomectomy. It is also necessary to remember that new fibroids may develop in future, resulting in recurring symptoms and additional surgical procedures.

After a Laparoscopic Myomectomy Surgery

After a Laparoscopic myomectomy surgery, majority of women around 80% of them experience relief from annoying signs and symptoms of uterine fibroids, including heavy menstrual bleeding and severe pelvic pain and chronic pelvic pressure. However, myomectomy surgery isn’t a permanent solution for uterine fibroids. New fibroids may develop and may or may not require a surgery.

Richard Muse is author at LeraBlog. The author's views are entirely their own and may not reflect the views and opinions of LeraBlog staff.