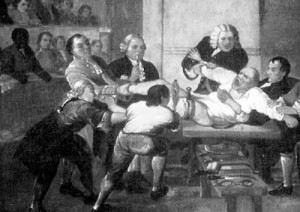 If you’ve been looking into studying for a Masters in Public Health online at the University of Arizona or another prestigious college, it’s likely that you’re also interested in the history of medicine.  Medicine is an ever evolving area of science, and most modern practices are light years ahead of those used in the past.  In fact, reading just one basic first aid book will give you more medical knowledge than 90% of the people who have ever lived.  Even though this is the case, there are some medical practices currently in use that are not too far removed from those that existed centuries ago.  Here we look at five medical procedures that have been used for centuries:

While it is certainly more comfortable and less risky these days, amputation has been practiced for hundreds of years as a way to remove infected limbs, fingers and toes.  While in modern times doctors will do all they can to save body parts and will amputate only as a last resort, it was actually the first resort to treat many conditions in earlier civilizations.  Without anesthetic, the infected limb would be sawn off, often with only “something to bite on” to help the patient deal with the pain.  The resulting wound would often get infected itself, or the patient would go into shock, so there was a very high death rate among those who underwent amputations without modern antibiotics and sterile equipment and surroundings.

Dental practices have, of course, developed dramatically, and naturally in the past people didn’t have things like crowns, braces, tooth whitening, or even professional dental hygienists, yet there are certain things, like tooth extraction, which haven’t gone away.  Because dental pain is understood to be one of the worst kinds of pain there is to live with, the practice of removing rotten teeth by pulling them out is an old one.  As with amputation, this would have been done with no anesthesia, and the resulting wound would have been very prone to infection, yet people underwent this as their only way to escape the agony of toothache.  Because of the deep reaching roots of adult molars, tooth extraction could end up being quite brutal, and the dentist (in many cases, he would also be the local blacksmith) would have to be very strong.  The dentist would often have to use his whole body, such as a knee in the chest of the patient, to be able to pull out the offending tooth, and the patient would often end up with bruising or even cracked ribs or a broken jaw.

Many people study for a Masters of Public Health before going into midwifery. But did you know that delivering babies by Caesarean section is another old practice? It got its name from an ancient Roman emperor who was supposedly brought into the world in this way.  Women experiencing complications in childbirth could be cut open to deliver the baby, though in past times, again, because of the risk of infection and shock, this could often be fatal for the mother.

The centuries old practice of acupuncture, which involves using needles in very specific places on the body to treat all sorts of conditions or relieve pain, has undergone something of a revival in the past thirty years.  While many “alternative” therapies are met with skepticism by doctors, acupuncture has been widely accepted as beneficial, and has even been used successfully by vets to treat animals, who are of course not subject to any kind of psychosomatic results.

If you mention old fashioned medicine to most people, one of the first images they will come up with is likely to be a doctor prescribing a course of leeches.  Leeches used to be used to treat a lot of things, because they would suck out blood.  This was a form of bloodletting, which has been used for centuries.  In modern medicine a form of “leeching” (though generally without actual leeches being used, for practical and hygiene reasons) is used to clear blood in things like microvascular surgery.