The dangers that influenza poses in the United States can be broadly understood by considering several factors that determine the circulation and penetration of viral infections. The nature of the infecting virus, the timing and seasonal variations, etc. contribute to the severe damage that influenza causes among the masses. Center for Disease control and Prevention records the emerging cases in its Influenza Surveillance System and thus is able to track the key indicators such as the rate of influenza (and similar)-related complaints, percentage of deaths and pediatric deaths etc.

While shorebirds, terns, ducks, and swans are the natural hosts of all discovered influenza type A viruses; humans are nonetheless vulnerable to this fatal disease. As a matter of fact, more than 30000 deaths occur every year due to influenza and related sickness.

A typical influenza virus is an enveloped RNA virus that belongs to the Orthomyxoviridae group. A helically symmetric nucleocapsid, influenza virus consists of seven to eight segments of single stranded antisense RNA. 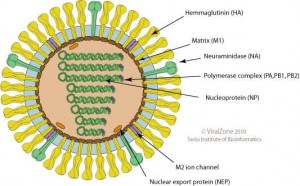 A schematic diagram of Orthomyxoviridae

Influenza viruses can be broadly classified into three subgroups viz. Type A, B and C. While all the types cause damage to the respiratory system and associated organs, type A is identified as the most dangerous influenza-causing virus. Type A viruses can be of two types based on the nature of surfacing antigen. The surfacing antigen may either be haemagglutinin (HA) or neuraminidase (NA). For example, an “H5N2 virus has HA 5 protein and an NA 2 protein. So far, eighteen types of HA and eleven types of NA viruses have been discovered1. The most fatal among them are H1N1 and H3N2 type A viruses.

The rising numbers indicate a strong blow at our existing medical facilities. Due to several reasons discussed below, influenza infection is affecting the common population:

US population has a considerably large number of aged people, and they are more susceptible to such infections from seasonal influenza circulation.

Influenza A (H3N2) viruses cause more serious sickness in comparison to other seasonal influenza viruses such as H1N1 or influenza type B virus.

With the advancement in medical technology, doctors are now able to detect the adverse effects of influenza infection not just on the respiratory system, but also on related organs such as the heart. A broader inspection and diagnosis facility has dramatically increased in the number of potential victims.

Tens of thousands of US citizens die due to this infectious disease. According to an estimate, more than $10 billion a year is spent as direct medical expenses, causing a loss to individuals and the nation as a whole. As such, US suffers an economic burden of more than $87 billion due to influenza and similar infections. However, the situations are improving, thanks to vaccination and medical amenities available to the common population. As per CDC Foundation2, 45% of US population received the vaccination in the year 2012-13, thus preventing more than 6.5 million flu-related illness and around 79000 hospitalizations. While the healthcare fraternity is constantly improvising the techniques and medical practices, it is universally agreed that vaccination is the safest and the most effective solution to prevent this deadly disease. Many more people can shield themselves from influenza once they get themselves vaccinated.