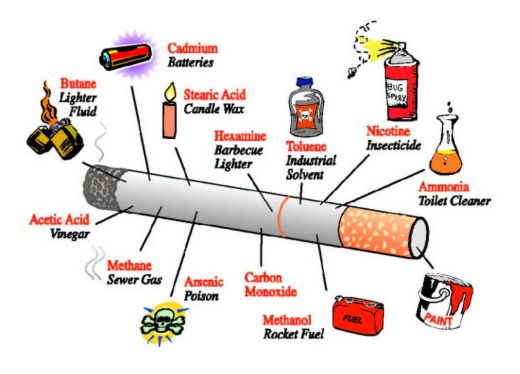 Everyone knows the big, major risks of smoking and, by being something of a broken record, it can sometimes reduce the impact these messages have on existing smokers and those trying to ditch the habit.

We're all well aware that smoking can cause everything from heart disease to lung cancer and emphysema, but what about the reams of other health issues that comes with inhaling 43 known carcinogens and 599 known additives? These can have an enormous impact on your physical and mental wellbeing, so avoiding these shocking and common health complaints just adds to the reasons why you should consider stopping smoking.

1. You Can Save Your Sight
Those who smoke cigarettes are four times more likely to develop blindness due to macular degeneration than those who don't. While those who have never smoked are at the lowest risk, stopping smoking can dramatically reduce the risk of the progressive loss of central vision.

The risk factors are not fully understood, but smoking (likely down to blood flow restriction) can damage the part of the retina that controls central vision - giving up means you're far less likely to succumb to this severe condition.

2. Your Teeth Won't Fall Out
By exposing your teeth, gums and mouth to cigarette smoke on a regular basis, you're exposing them to chemicals which can rapidly increase the build-up of plaque on teeth, and infection in gums. By restricting blood flow, smoking also starves the vital areas of tissues in your gums of oxygen which (alongside infection and plaque build-up) can lead to chronic gum infections.

Over time teeth will eventually loosen and fall out, and the plaque and infection can also erode away bone causing massive decay in any teeth that remain. By ridding your mouth of toxins, and restoring blood flow to normal, stopping smoking can return you teeth and gums to their original healthy state.

3. Brainpower Will Be Improved
One of the major benefits of giving up smoking is the improvement your health will see from a return to normal blood flow, and the correct amount of oxygen reaching your organs. One particularly vital organ that relies on a substantial supply of oxygen is your brain, with a lack impeding its ability to work.

Research has shown that ex-smokers have an improved memory and better reasoning skills than those who still regularly light up.

4. You'll Have A Better Sex Life & Be More Fertile
Bluntly put, not only can smoking kill you in the long term, it can kill your sex life much more quickly. All the additives and carcinogens in cigarette smoke act as vasoconstrictors, therefore restricting blood flow by constricting blood vessels.

By giving up smoking, men will see a dramatic improvement in virility, women will see the chances of conception vastly improve, and both sexes will have an increase in their fertility. Many of the 4,000 chemicals in cigarettes can damage men's sperm count and mobility, while women can suffer with reduced estrogen levels, damage and loss of eggs and a higher risk in genetic abnormalities in their offspring.

Stopping smoking can reduce all these risk and halt damage to sperm, eggs and hormones, allowing your virility and fertility to return to normal - as well as dramatically reducing the risk of abnormalities in your children.

5. Your Skin Will Not Age As Quickly
Smoking cigarettes does not just starve your vital organs, such as your heart and brain, of oxygen - it also has the same effect on your skin cells. The lack of oxygen means that important nutrients are not delivered to your skin, causing it to become damaged and dry. The other toxins in cigarette smoke can also attack collagen and elastin in your skin, which is the cause of sagging and wrinkled skin in smokers.

The weaker areas of skin, such as your cheeks, around your mouth and under your eyes, are often the most affected, though skin damage from smoking can be seen anywhere on the body; smoking has also been observed as a factor in sagging breasts in women.

6. Your Children Will Be Happier
Research has shown that, as well as the positive impacts on your own health and well-being, stopping smoking tobacco can also have an effect on the happiness of those around you. In a survey conducted among children of parents who smoke, 98% of the youngsters wish that their parents would quit smoking - and say they would be happier if they did so.

This article was written by Tom McShane - an aspiring blogger and health enthusiast. Often spending time researching health online, and bugging his doctor for as much information as possible on his check-ups, Tom also recommends VIP electronic cigarettes as a much healthier alternative to smoking.

TomMcShane is author at LeraBlog. The author's views are entirely their own and may not reflect the views and opinions of LeraBlog staff.