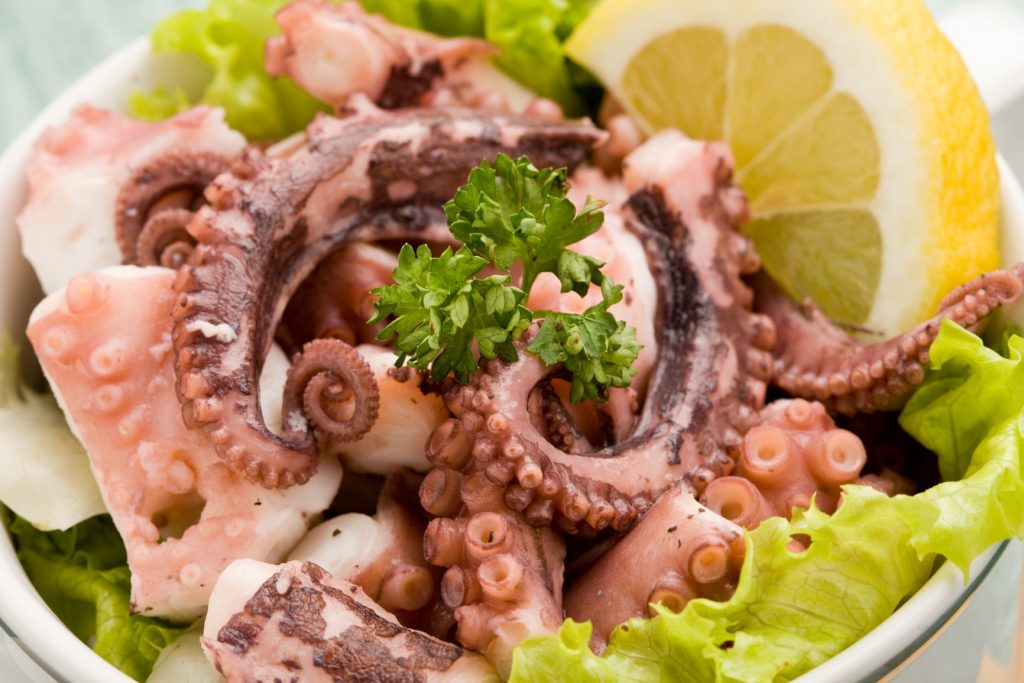 People from all over the world have been known to eat the mollusk known as octopus, not to be confused with calamari, which is a squid.

Residents of Spain, Japan, Korea, the Mediterranean and the United States have been enjoying it for many years. It is considered a delicacy in some areas as the arms and/or other body parts are prepared in different ways, depending on local customs and culture. Some people eat it dried, grilled, deep-fried, steamed, hot, marinated and cold, or with a variety of spices, sauces, and batters. Some even eat it alive, which has caused much controversy over the years.According to the USDA (United States Department of Agriculture), octopus contains 56 Calories per

According to the USDA (United States Department of Agriculture), octopus contains 56 Calories per 100-gram serving, when cooked. It is also a source of vitamins B3 and B12, as well as phosphorous, selenium and potassium. Octopus is considered a high source of protein and is naturally low in fat. However, it provides high levels of sodium and cholesterol, so should be eaten in moderation as part of a balanced diet.
Octopus does not please everyone’s pallets; it’s an acquired taste. It can also be expensive to purchase and complicated or time-consuming to prepare. However, when prepared correctly, most people enjoy its taste. A major concern is that the meat will be rubbery, however many methods exist out there in the cooking world to avoid this mishap.

Many believe that tossing a wine cork in the pot avoids a rubbery texture, but I am more inclined to reject that hypothesis. However, you can try it out for yourself! If you are boiling it, aim for around two hours (2). Extra time keeps the tentacles tender, but take care that you do not cook it for too long, or it will become mushy. The meat can then be placed on a grill for a smoky flavor, or in the oven if you plan to season it or add sauce.
Octopus should be thoroughly rinsed before cooking, making sure the tentacles are very clean. It can then be cut and boiled, simmering for at least two (2) hours. They should be next placed into the refrigerator until the next day, allowing the tentacles to become firm. Before cooking, wipe away any liquid that settled in the pan and dry the tentacles with a paper towel. This makes grilling much easier.

But what does octopus taste like? Octopus can be purchased fresh, frozen, or canned. The canned version is not very fishy, but rather has the texture of clams and a dark-meat chicken taste. When prepared fresh and cooked properly, many find that octopus has a sweet taste similar to that of lobster. Octopus can be ordered in many specialty restaurants, especially Asian ones, which may be the best idea if you are a newbie to cooking. Experiment with a few different dishes and recipes to get a taste for what you like before venturing out to prepare it yourself. It can be tricky and easy to mess up when you are just starting. Also, if you are cooking it indoors, it can smell quite unpleasant and leave its odor in your house for couple of days. If you are an experienced cook, or are feeling adventurous, however, by all means, go for it! The internet is flooded with a variety of octopus recipes. To get you started, here are a few of the recipes that I find the most interesting:

Octopus can be an extremely tasty dish when prepared properly, with care. A little bit of experience may be required if you are not generally comfortable in the kitchen, but with a little work, anyone can prepare great octopus. The key is to develop a taste for it and experiment to find the right recipes and preparation methods for your taste preferences.