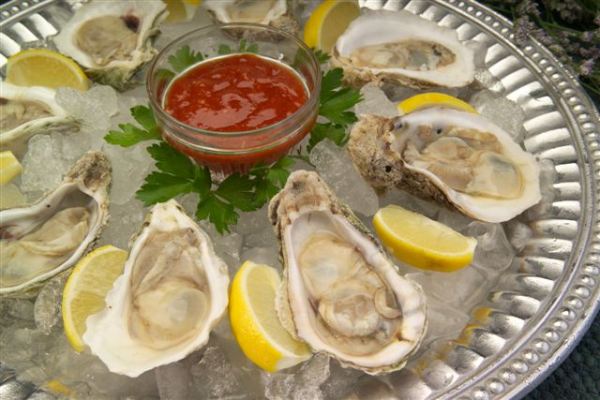 Once upon a time, oysters where a poor substitute for meat or fish and the Romans ate them abundance. On the sites of former Roman villas in Britain, archaeologists have found the shells of cockles, limpets, mussels, oysters and whelks, not just along the coastline but also inland as far north as Hadrian's Wall.

How far is that?

Hadrian's Wall was the northernmost part of the Roman Empire. It was intended (with varying degrees of success) to keep the Scots out of England. On England's northwest coast there were Roman defences in what is now Cumbria, at Ravenglass, Whitehaven, Workington, Maryport and Bowness-on-Solway, and Hadrian's Wall ran westwards through Carlisle to Hexham in Northumberland and beyond this point to Newcastle upon Tyne, Wallsend and South Shields in the northeast.

As archaeologists have found shells some distance from the sea, it's assumed the creatures must have been transported in water tanks while still alive. Britain's oysters were not merely edible they were superbly sumptuous - so much so that as well as being consumed at home they were also transported to Rome.

Today, of course, oysters are a prized delicacy; known to be packed full of vitamins and minerals, they feature on the menus of some of the best restaurants in London.

After the Romans left, their popularity waxed and waned but by the 15th century the oyster was again a popular food eaten by rich and poor alike. This was helped by the church's rules about â€˜fish days' when no meat or poultry could be eaten.

By the 17th century oysters were often eaten with other foods. They were used to stuff poultry, added to sausages alongside mutton or pork, and oyster sauce was poured liberally over turkey. They were also popular as a hors d'oeuvre and were now being pickled so they could be transported long distances. Imaginative cooks were creating oyster stews and oyster pies, while small fresh varieties were eaten raw as a delicacy.

During the 18th century around Mersea Island in Essex (the River Crouch and the River Roach) fishermen noticed harmless algae clinging to oysters like a beard. These were collected and deposited in pits in the salt marshes for up to two months. Londoners considered their dark green colour to be very attractive and by Victorian times oysters were still plentiful and relatively cheap, with pickled varieties regularly being consumed by the poorer Londoners.

Today, the Oyster Bar and Grill at Boisdale's of Canary Wharf does wonderful things with this delicious delicacy. Treat yourself to a night out at one of the best live music venues in London - download a menu from the website and book a table - togas are not compulsory.