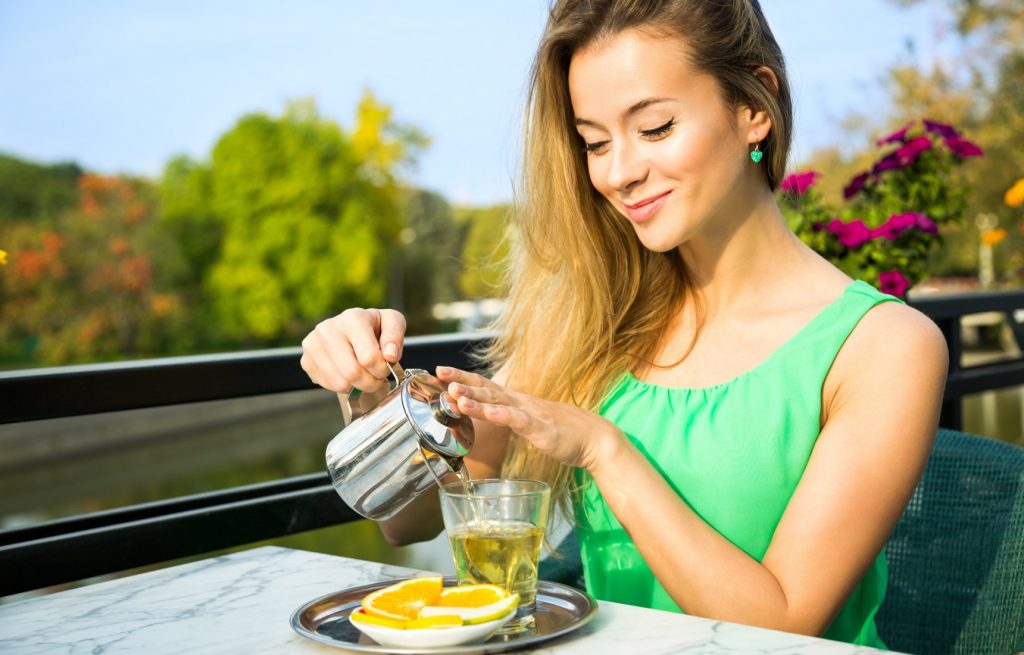 Staying hydrated and taking in fluids is essential for everyone, especially pregnant women. A woman who is pregnant helps the placenta and the amniotic fluid by taking in water throughout the day before she goes to bed. She should drink eight to 12 glasses of water a day to keep her body hydrated and regulated.

Besides water, is there another way for a pregnant woman to get her fluids? Many people know they should drink plain water but may find drinking nothing but plain water to be tedious or challenging. Take tea drinking, for instance. People have been drinking various teas for thousands of years. What about green tea? Can a woman get some of her fluids from green tea? Or, is green tea not a substitute for water?

What is Green Tea?

Green tea comes from the same plant that black tea, white tea, oolong tea, and yellow tea comes from, and that is the unfermented leaves of the tea plant, a small tree. Herbal tea does not contain caffeine, but green tea does. Therefore, green tea is not an herbal tea. It contains caffeine, but not as much as coffee. Even though green tea contains small amounts of caffeine, it has a significant benefit, and that is the vast amounts of the antioxidant polyphenols. What do these do? They fight free radicals and prevent damage to the DNA in our cells.   These antioxidants slow aging lowers cancer risk and protects the heart. Antioxidants are also useful for speeding up a body metabolism and countering mood swings related to pregnancy.

Furthermore, antioxidants are good for the T-Cells in our body which keeps our immune system working correctly. This helps to maintain a pregnant woman from getting ill with a cold during pregnancy. Green tea can also help with indigestion and other stomach problems that some pregnant women encounter. Fluctuating hormone levels can lead to gingivitis in some pregnant women, and green tea helps to reduce this problem, as well. People drink green tea for these benefits and despite its caffeine is a potent drink.

Is it Safe to Drink Green Tea During Pregnancy?

Some experts say a warm cup of tea can ease morning sickness and reduce a woman’s time in labor. However, that applies to herbal tea which helps to hydrate the body if a woman doesn’t want to drink plain water. It does not apply to green tea. So is green tea safe to drink during pregnancy?

Pregnant women should avoid coffee because it dehydrates the body. Consuming more than 200 milligrams of caffeine can double the risk of miscarriage, some studies report while other reviews say that there is no association. Even though the conclusion is not definite, some indicate that consuming too much green tea while pregnant disrupts the absorption of iron into the blood cells which hampers the hemoglobin production. When it is hindered, gestational anemia can result. Furthermore, drinking too much green tea can disrupt the absorption of folic acid, and that can lead to spina bifida, a congenital disability of the spinal cord. So as far as green tea, which contains caffeine, it’s okay to drink it, but a pregnant woman should limit her intake of green tea to just one or two cups a day.

So what is the conclusion? Can a pregnant woman drink green tea? We know that women who are pregnant need to keep their bodies hydrated and to do that they should drink 8 to 12 glasses of water a day. Herbal tea can be a substitute for some of those glasses of water if a woman does not want to consume anything but plain water. However, green tea, because it contains caffeine, is not considered a substitute.

Therefore, drinking green tea is safe during pregnancy as long as you limit it to less than 200 mg per day which results in no more than two cups a day. Green tea contains antioxidants which are suitable for the body, but because it contains small amounts of caffeine and because large amounts of caffeine can be dangerous for pregnant women, it should only be an additional drink on top of the water a pregnant woman consumes and not a replacement. Some even say you should avoid green tea during the first trimester and only drink up to two cups a day starting with the second trimester.

Additionally, there are other things a pregnant woman may drink that can contribute to caffeine intake, such as coffee, chocolate or energy drinks. The 200 mg should be a result of everything a pregnant woman has consumed that day and not just green tea consumption. With all that said, you should always consult your gynecologist before drinking green tea. He or she may have specific advice regarding green tea that you should follow.