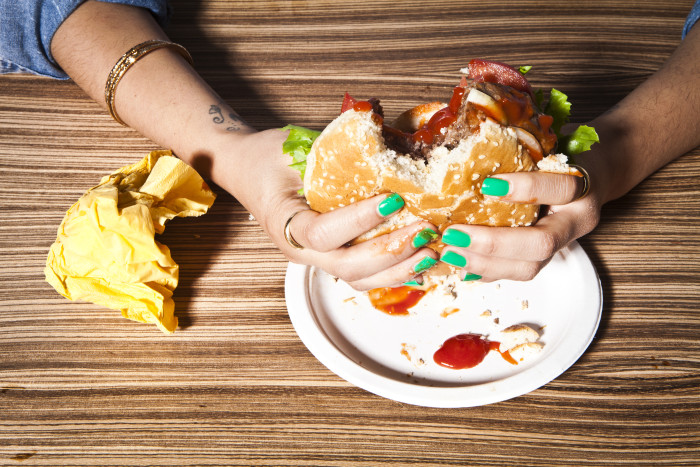 During the filming of the famous documentary Supersize Me, Morgan Spurlock spent a whole month absorbing huge portions of McDonald’s dishes. As a result, he gained weight, damaged his liver and experienced a real addiction syndrome. This phenomenon is usually explained by the fact that fast food is a poisonous mixture of carbohydrates, trans fats and all sorts of preservatives. This, for example, is true, but what is the immediate cause?

In total darkness in our intestines live tiny creatures that hate harmful food – these are hundreds of billions of microbes. They help to digest food, provide us with many vitamins and help maintain health.

We do not know to the end how much our life depends on microbes. They are not just useful – they are an integral part of us. Judge for yourself: about 2% of the body weight of a person (on average a kilogram of one and a half) is a pure microbiota. Bacterial cells in us are 15 times larger than our own. These bacteria carry more than three million genes. For comparison: the human genome contains about a hundred times less, and 40 genes got to us, again, from bacteria. Strictly speaking, we are a walking colony of bacteria. And certainly, we would not have survived without them, because their “good” bacteria protect us from strangers deadly dangerous.

The turning point was the story of fat muscles. American geneticist Jeffrey Gordon and his colleagues from the Washington Center for Genomic Research were among the first to discover that the composition of flora in lean mice and their corpulent relatives varies dramatically. Moreover, when scientists took the microflora from complete mice and transplanted thin, they gained weight. Conversely, full mice shed weight when they were transplanted with bacteria from the intestines of the lean.

Furthermore: as shown by subsequent experiments in mice and in humans, even the most sparing courses of antibiotics destroy bacteria in the intestine. Over time, the quantity is restored, but not the quality, the microbiota species diversity becomes poorer by an order of magnitude. Approximately as with the wild nature, when the whole forest burns out and instead of hundreds of different kinds of trees in its place plant a continuous Canadian pine. This would not be so bad, but it turned out that with such a poor set of strains of bacteria laboratory mice are much more prone to obesity, diabetes and metabolic syndrome. In general, over the past five years, it has been repeatedly proven that microorganisms in the intestine affect the metabolism and can work in both directions: a “bad” microbiota provokes disease, “healthy” – promotes recovery.

Studies in mice have shown that when eating a harmful fatty meal, the microbiotic composition of their stomachs changed almost completely. The situation was partially corrected with the help of probiotics. In another study, representatives of the African tribe were imprisoned for an “African-American” fast food diet for two weeks, and a group of blacks was asked to eat legumes and vegetables from the diet of savages. As a result, people from the tribe were close to the development of diabetes, and in African Americans, on the contrary, blood tests significantly improved.

It turned out that both those and others radically changed the intestinal flora. Until recently, the action of fast food on the gastric microbiota has not been investigated. Tim Spector, scientist, and author of the well-known book The Diet Myth, decided to conduct the experiment on his own. His son Tom volunteered: for ten days he had to eat exclusively in McDonald’s, and in the evenings to drink beer with chips. He collected samples of feces before, during and after the experiment and sent them to three independent laboratories. Within three days the young man quickly became tired, the color of his face deteriorated, and the forces seemed to have left. He admitted that, at the end of the experiment, he ran to the store for fresh salad and fruit.

The test results were shocking: Tom’s intestinal microflora was almost completely destroyed. The colony of bifidobacteria, designed to contain inflammation, has died out, and in general, the variety of microorganisms has decreased by 1,400 species, that is 40%. For an organism, this is a critical indicator. It is important that even two weeks after the end of the fast-food diet, the microflora has not recovered. Such disorders are often found in people with obesity, diabetes and metabolic syndrome.

In September 2013, the journal Nature Communications published an article by Russian scientists who examined the microbiota of people living in cities (with antibiotics, fast food and all the rest) and in villages (that is, in theory, closer to nature, without antibiotics and fast food). The work, which involved more than three dozen researchers, lasted three years: during the year collected samples for analysis, another year took the DNA decoding, and about a year – data processing and analysis.

“We found that the species diversity of bacteria in the intestines of urban residents is much poorer than in rural areas,” says Dmitry Alekseev, co-author of the work. – And the townspeople in Russia, Europe and America are microbic in composition as twins-brothers, but the villagers, even within our country, are very different. That is, in the human intestine, globalization also occurs. People across the land eat the same hamburgers, which contain antibiotics, the microbiota is scant, and further, it leads to different diseases. ”

How exactly different diseases are associated with changes in microbial composition in the intestine, is not yet known. It is only proved that there is a connection. However ridiculous this may sound, we ourselves are the owners of our bacteria and must provide them with a healthy variety of food: greens, vegetables, and dairy products. Then they will give us a hundredfold.

alexandrKorv is author at LeraBlog. The author's views are entirely their own and may not reflect the views and opinions of LeraBlog staff.